Prospects of democracy in Pakistan

Pakistan needs to work on its human resource in terms of the quality of life. Currently, the fragile democracy is inadequate to deliver that 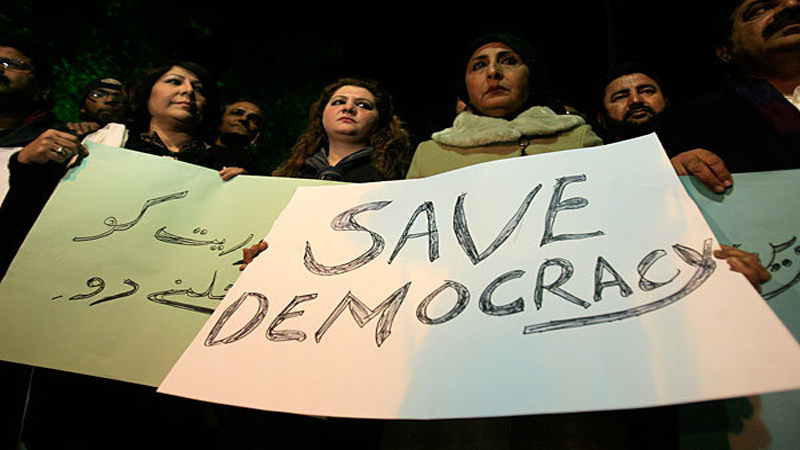 The bullet of judicial martial law, originally shot from Sheikh Rasheed’s gun, has finally reached its destination: CJP’s comments over Asma Jahangir, and assurances of quitting the apex court if there is any martial law, served as the last nail in the coffin.

Judicial martial law is nothing but an exploitation of judiciary to legitimise misdeeds of the establishment. It’s a law derived from the gun.

Only Sheikh Rasheed can do such magics. After all, he loses nothing in saying so. He can manage to align with anyone in power. He has been with almost all leaders and politicians.

We can bury judicial martial law well before it becomes a foetus, but we cannot do the same with the martial law. It still haunts and can become a reality once again. It can be seen, touched and felt again. Only one element is missing: its partner outside the country. However, all other ingredients that are required internally are there.

History suggests that martial laws were stamped by the US. This time it won’t be so, hence it will be sui generis, that means not internationally supported, if history is any guide. Yet it equally is a fact that the US is not that powerful and Cold War is history.

We are in a region where even the influence of India is diminishing in favour of China. China will not stamp on martial law here. Another major external actor that has its role in our internal affairs is Saudi Arab, which is also changing from within. It’s packing up its state narrative with speed. Its counter narrative is making its inroads quite fast.

Martial law can become a reality once again. But this time, it will not have an abettor outside the country. History suggests that martial laws in Pakistan have always been stamped by the US

Yes, Saudi Arabia can welcome here a military coup but not without a heavy price to pay if this martial law is not welcomed by the US, directly or indirectly. If China welcomes martial law, it will send a very negative message to the US, it will frustrate the US rather.

It was not one-sided game either, our politicians’ performance and weak democratic base has also added in the usurpation of power of sovereign. Had MNS not terminated the General Musharraf, army would not have been able to justify the coup at that time.

There was lull. No one came on streets to defend their power which was usurped by a bunch of senior military officers. That silence lent legitimacy to the coup. Bhutto also handled his opponents with iron hands, it was a movement triggered by the US and the rigging in the election fuelled things against him. It was a moment to be ceased and General Ziaul Haq ceased it. General Ayub Khan also took the reign in his hands when politicians went fail to handle it all themselves.

Let this mess may not go too long and too dragged. It should end up smoothly without raising the question of constitutionality on the acts. In the deepest level the issue of Pakistan is that who is sovereign? Empirical evidences suggest it is the question which is still lurking in the middle from the last 70 years long history of Pakistan.

Democracy is a mean of the relatively industrialised society. It is a tool of middle class-based societies and narrative is the mode that plays its role to translate the aspiration of people over the ballot box. Ours is a society which is a mix of industry and agriculture. It is still not fully able to reflect its choice through narrative. Electable politics is still there though diminishing gradually.

Till the society translates into fully middle class based one and the role of electable is minimised. This question will not be answered fully that who is sovereign.

All three leading parties, PML-N, PTI and PPP are playing on the complex turf. Bad governance is rampant. Fake news is yet another dominating factor being aggravated also by the rogue social media. People are not fully trained through the repeated exercise of going to ballot box.

After a long time, there is general perception that the system may go derailed. Some extra constitutional thing is on the anvil. Judicial activism has crippled government’s function, yet only orange trains are not solutions. This country needs its human resource to be improved in terms of their quality of life. The present position of democracy is devoid to deliver that.

The shambled democracy itself is a pretext for these anti-democracy voices.