The US, Israel and India's closeness in recent years is aimed at evolving a joint strategy to suppress the freedom movements of the Muslims in Palestine and Kashmir

Nowadays a country’s interest seems superior than the humanity. Discriminatory approach is adopted to the universal rights of the people for achieving the ulterior motives and interests. The movements launched for legitimate rights and freedom are painted as terrorist movements. The struggle launched by the Kashmiris and the Palestinians provides clear evidence of such discriminatory approach.

An Act of terrorism must not be supported but condemned at every stage and every forum. Because it is enemy of entire mankind. It may be from within or outside. However, discriminatory approach and failure of differentitating between terrorism and freedom struggle or movement for rights may prove harmful to the entire mankind.

The spirit of respecting the human beings and their legal and legitimate rights beyond one’s interest has been continuously unabated, particularly since the world war I. The Palestinians and the Kashmirs have been struggling for their freedom and legitimate rights. The U.S and other countries even are not ready to give proper heed on the cruelties being perpetrated by the Israeli and Indian forces in Palestine and Kashmir respectively. The United Kingdom is also silent on the two issues. 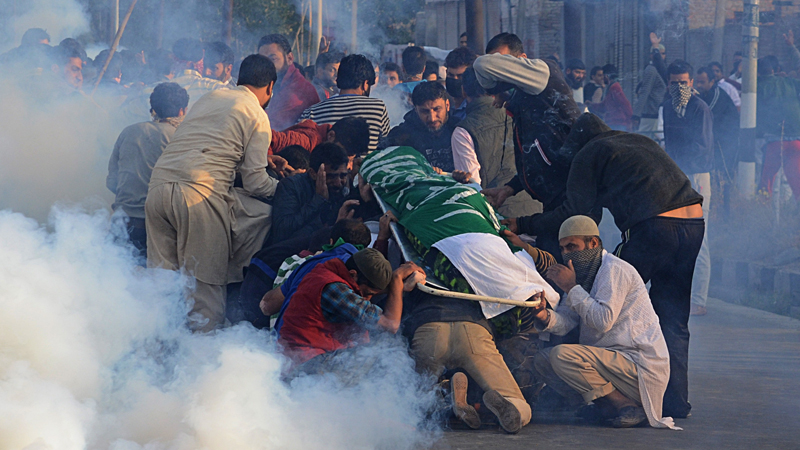 Arthur James Balfour, the British foreign minister, wrote a letter to Lord Rothschild in 1917 in which a Jewish state in the land of Palestine was supported. It was approved by the British cabinet and subsequently received approval of the British monarch. This letter is popularly known as Balfour Declaration. The declaration provided, “His Majesty’s Government view with favour the establishment in Palestine of a national home for the Jewish people and will use their best endeavours to facilitate the achievement of this object, it being clearly understood that nothing shall be done which may prejudice the civil and religious rights of existing non-Jewish communities in Palestine, or the rights and political status enjoyed by Jews in any other country.” The contents of the letter or declaration clearly indicates that the land of the Palestinians was demarcated illegally to make provision of the Jewish state. Great Britain did so in its own interest.

The Palestinians only want to give them an independent country and recognize them as a separate state. They are unknown in their motherland. The United Nations constituted a committee to consider the application of the Palestine for its admission in the world body as separate entity. In its 111th session, the committee approved the application for extending UN membership to the Palestine. However, it has been given status of permanent Observer in the United Nations. This question is open to the United Nations and other countries that a country which was established on the land of Palestine has been given status of membership whereas the original dewellers have been denied the U.N membership. Is it in accordance with the spirit of the UN Charter and law of the “civilized world”?

Same treatment has been extended to the Kashmiris. According to the sub-section 4 of section 3 of the Indian Independence Act 1947, “nothing in this section shall be construed as preventing the accession of Indian States to either of the new Dominions”. India forcibly denied the right of accession of the states of Hyderabad and Jungadh and forcibly annexed them. The Maharaja of Kashmir declared its accession to India against the popular sentiments of the Kashmir valley in 1947-48. Since then, Indian forces have been committing inhuman acts to suppress the freedom struggle. Men, Women, boys and girls have lost their eye site. Killing of unarm Kashmirs happens daily. The quarters, those consider this freedom movement against their interests, have painted it as a terrorism. The United Nations has condemned the violation of human rights in the valley of Kashmir under Indian occupation. But the world body is toothless before the world powers which always see the UN with “respect and honour”.

The U.S, Israel and Indian closeness in recent years is aimed at evolving joint strategy and join hands to suppress the freedom movements of the Muslims in Palestine and Kashmir. The Western countries and their other friendly countries have never built up pressure on India and Israel to obey the resolutions passed by the United Nations. Their such behavior is against the teachings of their respective religions/isms.

Hazrat Umar (RA) remained Khalifa of the Islamic world for about ten years. Around 637 AD he travelled to Jerusalem. Sophronius, representative of Byzantine government and leader of Christian Church greeted him in the city. At the time of offering prayer, Sophronius invited him to pray inside the church. He refused to accept his invitation and offered prayer outside the church. It was not due to the fact that he developed hatred in his heart for the Christianity. The Islamic teachings restrained him from accepting the offer of offering prayer. The Khalifa refused in the greater interest of mankind and in accordance with the spirit of Islam. Hazrat Umar (RA) said historic words which are golden rules of human races who believe and love human beings and want to always raise standard of religious freedom and rights of the humanity. He said that his offering prayer there might provide ground of the conversion of the church into mosque and depriving the Christians from one of its holiest place. A Treaty was signed between the Muslims and the Christians of the city. Now, Israel create difficulties for the Muslims offering prayer in the al-Aqsa mosque but the world conscience has not made any tangible efforts for allowing the Muslims to perform prayer.

The killings of the Muslims and other minorities in India may not be ignored on the pretext that it has roots in pre-independence clashes and conflicts in the sub-continent. Due to the policies of British government and All India National Congress particularly from 1857 to 1947 in the sub-continent, the Muslims gradually convinced that they might not live with the Hindus. The Quaid-e-Azam always propagated for Hindu-Muslim unity and his efforts got real shape when joint session of All India Natioanal Congress and All India Muslim League was held in 1916 in Lucknow. But this unity proved short-lived due to the Congress demands and policies. Thus, the Muslims demanded a separate homeland.

The terrorism has been divided into domestic and international terrorism. According to the definition of the US Federal Bureau of Investigation website domestic terrorism is “perpetrated by individuals and/or groups inspired by or associated with primarily U.S.-based movements that espouse extremist ideologies of a political, religious, social, racial, or environmental nature”. This definition of terrorism is the U.S-centric. Several acts committed in the US come under this definition. Despite differences on various issues, the Muslim world and the non-Muslim world condemned happening of these acts. But this unanimity at the world level has never been observed on happening of state terrorism in Palestine and Kashmir.

Discriminatory approach of dealing with terrorism may not solve the global law and order problem. It may prove main hurdle in creating conducive environment where humanity may survive with peace and tranquility. Interest based condemnation of terrorism may not keep the countries safe.