As per the scheme, the tax base has been reduced for the salaried person and an exemption has been given to people who are earning up to Rs1.2 million per year

In the very last half of its innings, the government has played a front foot cover drive by introducing a tax amnesty scheme. The tax amnesty scheme or reform scheme (as the prime minister said) has been divided into three major parts. Two parts of the plan are mainly related to the amnesty while the other one is a kind of tax relief to the current taxpayers.

As per the scheme, the tax base has been reduced for the salaried person and an exemption has been given to the people who are earning up to 1.2 million rupees per year.Similarly, the tax rates have also been reduced from 20 to 25 percent to 5 to 15 percent for various income groups, and the national identity card number will become income tax numbers.

On the other hand, the property sector reforms have also been introduced through this scheme by giving the idea of the abolishment of DC rate for property registration.

The last and final part of the scheme is mainly about the amnesty according to which a person can take advantage of the scheme by documenting his/her undeclared property/asset abroad, in dollar account and foreign cash asset. For this one-time documentation, the person will have to pay a penalty of two to five percent of his/her total asset worth, as per the category of the asset. 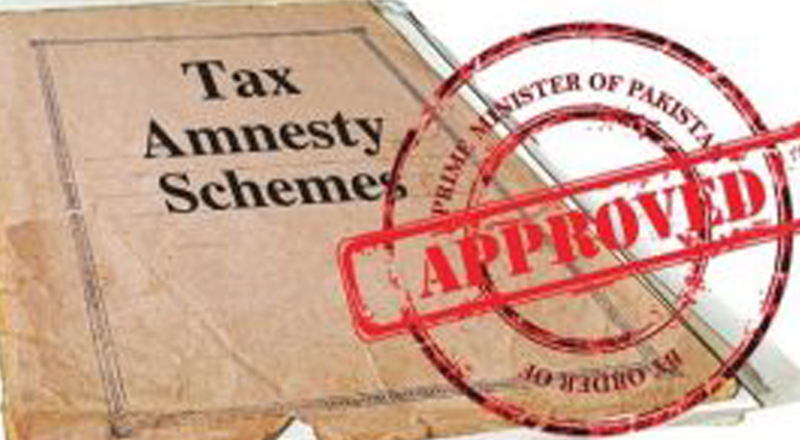 It appears that the basic idea behind this scheme is not to legalise the whole black economy but to generate revenues. The government has stated that those who will benefit from this scheme, their names will not be publicised,and they will not also be asked for their source of income.

This means, through this one-time amnesty, the asset whitening can be done at a very nominal rate of two to three percent. This whole amnesty part looks very absurd. In the past, this kind of amnesty schemes had been practised by the Musharraf and PPP governments in their respective eras. These schemes not only failed to achieve the desired target of revenue mobilisation but also the overall tax culture wasn’t improved due to these amnesties.

This amnesty scheme is another political stunt like the previous ones. The basic aim is to get political mileage by reducing the tax rates of the salaried class and nothing else.

The local and domestic tax authorities have/had failed in the past two decades to implement the scheme properly. The similar kind of practice was done in the 1990’s by the then government of PML-N. It failed due to non-serious behaviour and poor administration of the tax authorities. The FBR itself needs a kind of structural transformation.

Without that structural adjustment in the revenue mobilisation process, no amnesty scheme can be made successful in Pakistan.

In the past, such schemes not only failed to achieve the desired target of revenue mobilisation, the overall tax culture wasn’t improved either

A very similar practice has been done in the neighbourhood by the Modi government. But the difference is the rate of penalty has been significant. The Indian government imposed 40 to 45 percent penalty on the asset whitening plus disclosure of the source of income so that the proper documentation can be made, which would assure any future financial non-discrepancies.

Another vital point is the absence of target from the government side. The prime minister and his advisor are still not able to define the target of the scheme, whether it’s revenue mobilisation or the tax reforms.

If tax reform is the target, then the only solution is to document the whole revenue mobilisation process with national identity cards. Although the government has announced that at the end of this scheme the number of taxpayers will increase with the help of identity card, it looks like a dream. This kind of project implementation needs some serious structural adjustment of the whole tax system. It will not happen by only saying that from now on the national identity card number is the NTN.

The only positive of the scheme is the low tax rate for the salaried class and nothing else. The overall basic idea of the amnesty scheme is giving a kind of a relief to the elites to gains ocio-political support.

Lastly, it’s the last year of the current government. There is nothing in the scheme illustrates how the government will increase the tax net. There is a big question mark over the fate of the next elections. In these circumstances, how can an outgoing regime announce financial amnesties or the budget for the next year? We all know that a budget is future planning, and a government or a political party which is unsure of its future should avoid this kind of practice.