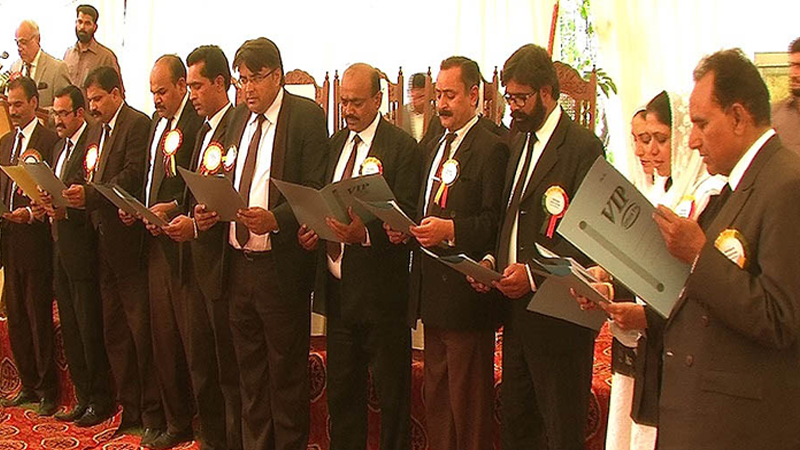 KHANEWAL: Governor Punjab Malik Muhammad Rafique Rajwana addressed the oath taking ceremony of Khanewal District Bar Association (DBA) where he admired the role of lawyers in revival of democracy in the country.

He mentioned the prominent role of lawyers in provision of justice. He said that the lawyers acted as a catalyst for the speedy trial of cases and supremacy of law.

Rajwana called law as ‘the difficult profession’. He called the law institution as a place of learning. He congratulated the elected office bearers of the Bar Association.

“You are the representatives of society that respects your opinion and guidance. It is your obligation to guide and support the people,” he said.

He expressed his gratitude for the respect he earns during every visit.

He said that the government cooperated with the lawyers so that they could fulfil their responsibilities peacefully.

The District Bar Association President Muhammad Ajmal Bhutta also addressed the gathering and honoured the Governor of Punjab for resolving issues of lawyers. He notified him the problems of district bar association.

The Governor pledged his full support for the bar association. He assured that their issues would be mitigated. He pledged his support for allocation of land to build lawyers colony, construction of a new conference hall and cafeteria in the bar.

Later, he distributed shields among lawyers and the guest of honour.

In his talk to media, the Governor said that general elections would be held on time. He pledged to resolve the issue of students who have to travel daily from Khanewal to Multan for acquiring education. He recommended that the route of Speedo bus service should be extended from Dera Adda Multan to Khanewal.