It is not just the Ukraine they have pushed into turbulence; they have been on this rank adventurism quite too often not in the distant past

Since the emergence of Russian-Ukrainian conflict, many held the view that a new Cold War had started; whereas the Cold War, in fact, never ended with the demise of the Soviet Union because NATO — an instrument of the Cold War — remained intact. However, the escalation of tension between the Western countries and Russia as well as US President’s rhetoric in recent days is fraught with serious dangers.

The Russian foreign ministry has accused British Prime Minister Theresa May of exploiting the issue of nerve gas attack on Russian double agent Sergei Skripal and his daughter, as May alleged that the Kremlin ordered it. According to a report, a senior British official said that the UK shared unprecedented degrees of intelligence about the Salisbury nerve agent attack as part of its international drive to secure the biggest diplomatic offensive against Russia since the end of the cold war.

Last month, more than 27 European and NATO countries announced mass expulsions of Russian officials and suspected spies to express solidarity with Britain. Last Thursday, Russia announced that it would close the US Consulate in St. Petersburg and kick out 60 American diplomats in response to the expulsion of Russian diplomats from the United States and a number of other countries.

Kremlin spokesman Dmitry Peskov called the move wrong and said that “Russia’s response will be guided by the principle of reciprocity”, which had been the hallmark of Russian diplomacy. Earlier, Russian foreign ministry spokesman said it was a part of a programme of Russophobia; but there was more to that. In December 2017, President Donald Trump authorised the largest commercial sale of weaponry to the Ukrainian government, which had annoyed Russia, and some sort of retaliation from Russia could not be ruled out.

The US then followed up this month with the provision of precisely the heavy equipment — Javelin anti-tank missiles. European countries have been accusing Russia of intervention in Ukraine, whereas they were equally responsible for throwing the unfortunate nation into turmoil by intervening on one pretext or another.

Russia is nostalgic about its Soviet era and does things to recoup its lost status. But Europeans are also plunging the world into greater disorder and chaos. It is not just the Ukraine they have pushed into turbulence; they have been on this rank adventurism quite too often not in the distant past. Their maddening geopolitical and strategic designs and regime change projects made Libya and Syria slipping down and down in a quagmire. One wonders over the outcry of western chancelleries, media and think tanks that they have been indulging in so hypocritically and so unabashedly over the Ukrainian crisis. 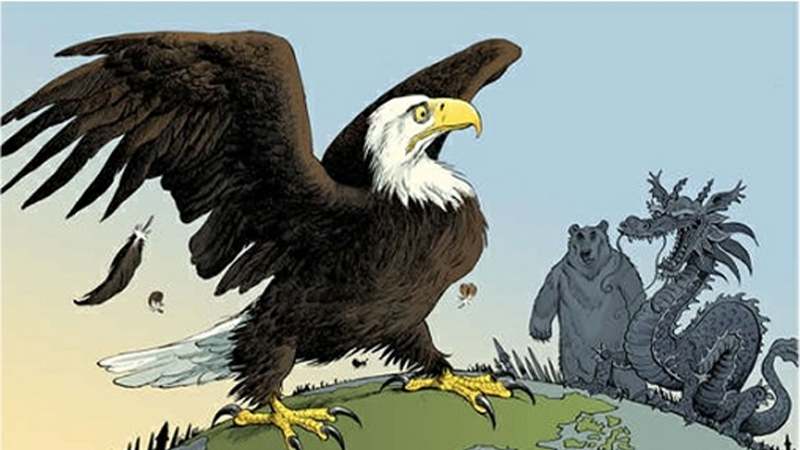 In fact, they have had the pioneering role in stirring the crisis. It was their incitement, prompting and their money that had triggered the massive street protest in Kiev that finally led up to the ouster of Ukrainian president Viktor Yanukovych. Had the Ukrainians been left alone, they would have sought the way out of the political imbroglio precipitated by the deposed president Viktor Yanukovych impetuous walkout from the done deal of trade association with EU and join instead Russia-led customs union.

Of course, President Putin has no hand to show clean either. No sophistry whatsoever can help him demonstrate innocence in the saga of Crimean Peninsula’s secession. In the venture, Russian agent-provocateurs were definitely involved. But with what face the western capitals slapped him for what they themselves had been engaged in Ukraine so blatantly? Illegitimacy against illegitimacy has become a rule of thumb there.

After Russia had annexed Crimea in March 2014, the US president Barack Obama and European leaders had slapped most stringent sanctions on Russia’s energy, arms and finance sectors in retaliation for Russian involvement in Ukraine. President Trump’s policies and rhetoric could unite Russia and China. In several recent policy statements, President Trump suggested “China, along with Russia were major rivals, which, together with rogue regimes and terrorist organs, challenge US economy, interests and values.

In confronting these dangers, unmatched power is the surest means.” In January, the US slapped a punitive tariff on Chinese imports, and China is also considering a proportionate quid pro quo. Since Donald Trump came to the office, he has challenged China’s claims in the South China Sea, increased the US military presence in Australia, and deepened US military ties with other nations in a region he decided to term the Indo-Pacific.

European countries have been accusing Russia of illegal intervention in Ukraine, whereas they were equally responsible for throwing the unfortunate nation into turmoil by repeatedly intervening on one pretext or another

Iran, Russia and Turkey held a second three-way summit on Syria in Ankara and reportedly agreed to ally. During Putin’s visit to Ankara, the ground-breaking ceremony of Turkey’s first nuclear power plant took place on Tuesday, which will be built by Russian State Nuclear Energy Agency at the cost of $20 billion and to produce 4800 megawatts electricity.

This shows cementing ties between the two countries. Anyhow, three dominant forces — Turkish-backed rebels, US-backed Syrian Kurds and the regime supported by Iran and Russia have different objectives. Turkey wants to defeat the Kurds; Syrian government wants to defeat the rebels Turkey is backing, and keep the US out. The US wants to defeat Iranian and Syrian governments’ plans in the region, while also keeping Russia in check. Except for the US, other forces would achieve their objectives, as the US has apparently decided to lay off its hands so far as Syria is concerned.