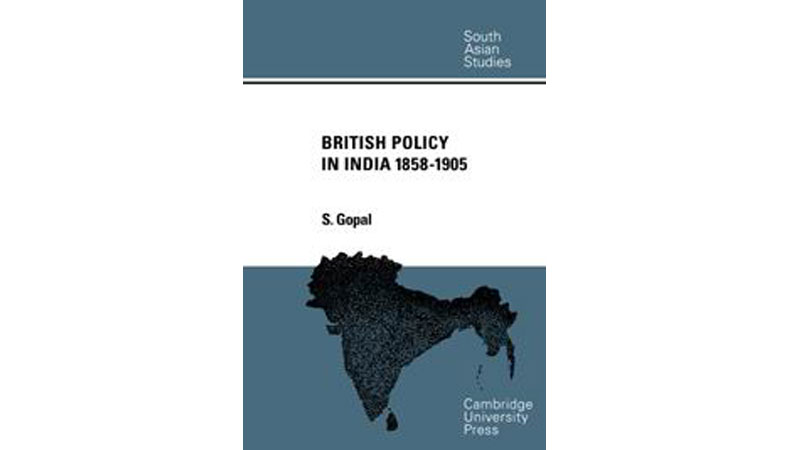 The first chapter of the book deals with the post war period (1858-1869). Discussion is unbolted with a discourse on the successful end of war of 1857 which was titled by British a large scale ‘mutiny’ even ‘more than a mere mutiny’. Study explored that Bengali troops were mostly Brahmans and Rajputs, and their families were living in Oudh. Concerns prompted Bengali soldiers, when they observed the economic exploitation from British East India Company, landowners and corporate classes. British civil servants and officials were not expecting a violent uprising by the natives.
The book also deals with the comparison of the thinking, policy and decisions of Lord Canning (1812-1862) and Dalhousie (1812-1860) regarding Indian politics. After the war in 1858, a general political opinion emerged to set aside the British East India Company and brought India under British Crown.
S. Gopal, in this book, depict the post-mutiny policies of British administration to validate their rule in Indian periphery to transform and refurbish the system. To accommodate the Indians and to engage them, in January 1859, Crown awarded general forgiveness to those Indians who surrendered during revolt as a positive gesture but not to those who murdered the British people.
This work illustrates how the British Raj gradually penetrated into Indian society and dealt with education and economy. In Oudh the entire system was reformed and 22658 out of 23543 villages were handed over to Talukdars (landholders). In March 1858, with the fall of Lucknow Rajas, the Zimindars (landowners) started to support British for socio-political and economic benefits. This work portrays that how British Raj managed the extraction of wealth and gained control over princely states, particularly the areas of Mysore, Meerut, Madras, Calcutta, Bombay and Bengal etc. But in case of Sikhs, British had some reservations as the book says, “there was a feeling among them that they had saved the British but that the latter would not recognise; so if the Sikhs got another opportunity they would seize it”.

Author has analysed the British policies and depicts India as an exploitative but not a settler colony. The extractions of wealth by collecting numerous taxes (including local and central taxation) through various revenue policies were practiced.
British used railway, telegraph system, road infrastructure and British codes as exploitative tools and to manoeuvre the native ethos. Gopal also says that finance minister Charles Trevelyan (1807-1884) was not in favour of public works but the governor of Bombay Bartle Frere (1815-1884) tried to convince him with the reasoning that railway’s mobility will be a source to reduce 1/3 of army.
Moreover, this writing also narrates the trend of foreign policy adopted by the British. Regarding foreign policy, first ever decision was taken by Lord Canning on the suggestion of John Lawrence (1811-1879).It said, “That Peshawar be abandoned to the Amir Dost Mohamed as a measure of economy and a pledge of good behaviour by the Afghans”. But viceroy enormously opposed this. Furthermore, British had a stern way to implement foreign policy so that the neighbours should only understand it as ‘the decree of fate’.
The period during 1869-80 Gopal has titled the period during 1869-80 as ‘conservative adventure’ and has done a detailed discussion on it. Author has started the discussion with the selection of Lord Mayo (1822-1872) by prime minister Benjamin Disraeli (1804-1881) because it was a shift in British India from the policies of liberals to conservatives. Lord Northbrook (1826-1904), an imperialist and later viceroy (1872) came to India not to practice liberal’s policy ‘but to maintain the Empire’.
Mayo tried to endorse the rationale that British intended to promote prosperity in India. Besides, viceroy also paid attention on Afghan Civil War. Secretary of state and Britain prime minister urged the viceroy to ‘secure the posting of Englishmen as British representatives’ at Kabul, Herat or in Kandahar, because they were looking for a new ‘conservative imperialism’. But Lord Mayo had flexible plans regarding Afghanistan. He wanted to influence Amir not by extending his fear but augmenting his hopes.
This Book covers the efforts of Lord Mayo to diminish the agonies and issues of Indians. Mayo from beginning had some issues concerning public works and development, particularly in north-western provinces. He launched many programmes regarding public works to reduce the unemployment. He intended to fortify the local bodies by transferring them appropriate funding, and to facilitate the Indians by reducing the ratio of income tax.  “He deplored that, after a rule of 100 years, there were no signs of any serious British attempt to train Indians in public administration”. Gopal portrayed Mayo a bit liberal and moderate because he softly dealt with the Wahabi issue and Kuka Movement of Sikhs during his term. Comparatively, among conservatives, Lord Lytton was bit harsh and had prejudice against the educated Indians. After the assassination of Lord Mayo in 1872 by Sher Ali Afridi, the era of Northbrook remained peaceful. Lord Lytton wanted to frame a native civil service against the Indians to appear in the ‘covenanted civil service’. His policies were asserting to create a typical class in India for colonial purposes.
Liberals returned after the elections of 1880 and appointed a viceroy in India. Lord Ripon (1827-1909) was considerably optimistic to implement the policies of his leaders in India. It was bit challenging because Indians were still under influence of conservatives. Author perceived that, because of Ripon, “Gladstonian Liberalism became a permanent element in the political scenario of British India”.
Britain administration, either liberal or conservatives, was worried about Ripon’s policies.  Regarding foreign policy, Ripon was seeking to draw out well-ordered resolution of Afghan problem with the assistance of Russia. Ripon wanted a treaty with Russia. Later in 1884, the negotiations between Russian and British officials regarding Afghan issues became fruitful but overall British Central Asian Policy failed.
In December 1884, Dufferin replaced Ripon as viceroy of India. Dufferin, with the support of conservative and liberals, became successful to set positive relations with Afghanistan— it was to secure the ‘frontier defence’. In this regard, an agreement was also signed with Russia on July 22, 1887. Actually it was the result of anti-war and settlement policies of Dufferin. He also dealt the issues of eastern frontier and Burma.
Viceroy became controversial in 1883 when Indian civil servants protested against Mayo’s policy regarding civil service. Viceroy was compassionate with Indians and dealt the matter wisely. Book also discusses the creation of Indian National Congress (INS), in 1885. Author focused on the Muslim sentiments regarding INC as political platform and its socio-political activities.
Gopal debates on various important incidents of the period during 1888-98 in detail. In this era, particularly Viceroy Lansdowne (1845-1927), believed to continue the financial and administrative policies of Duffrin. Moreover, “Lansdowne continued to urge the introduction of the elective principle for the provincial councils. The India press was strongly in favour of it and to exclude it from any scheme of reforms would only encourage agitation”.
In this era, British administration of India also focused on Congress and council issues. This book intensely concentrates and discusses the activities regarding differences and settlement with the Congress and the Afghan boundary issues. Furthermore, British prime minister Salisbury (1830-1903), during this period, focused on the ‘protection of British interests in South Persia’. He was in the favour to construct the railway system in Quetta, Gawadar or Karachi. By practising these strategies, British were ambitious to stretch their policies in the region efficiently.

Lord Curzon launched many investigative commissions. He made efforts for police reforms, eliminating the corruption and to promote the economic development. He did the partition of Bengal, the largest Province of India, to improve its developmental process. This politically motivated the Muslims of the East Bengal. As a result, Curzon also faced a huge agitation by the Congress and the Hindu political and corporate classes of West Bengal. He provided a revival to conservatism in India by refurbishing the main features of Lord Mayo’s policies. He proved that a proper administration is continues process. S. Gopal admires the proficient administration of Curzon during 1898-1905. Author concludes with an output saying, “India after 1905, had new interests and objectives and compelled new lines of British policy”.