India was divided by the British not to save Muslims from the Hindus, but to preserve Britain’s strategic interests in the region

For decades, the prevailing view among historians has been that the boundary lines between India and Pakistan were drawn by Sir Cyril Radcliffe, a barrister. A man who had never traveled east of Paris, Radcliffe was given a few weeks to accomplish this task by Lord Mountbatten, Britain’s last viceroy, during the summer of 1947.

The lines that he drew came to be known as the Radcliffe Line. They caused some fourteen million people to migrate in both directions, causing overwhelming chaos and mayhem, which left deep scars in the Subcontinent that can still be seen today.

Radcliffe was not pleased with the work he had done. He refused to take any compensation from the British government and never returned to the Subcontinent, saying that he would not survive for very long after his arrival in either country.

In 1997, a distinguished Indian diplomat who had served as Mountbatten’s ADC in 1948, was researching the British Library’s Oriental and Indian Collection in London. There he came across some newly declassified materials about the Partition of British India.

After discovering this treasure trove, Ambassador Narendra Singh Sarila began searching for more ‘unsealed documents’ in a variety of other places, including the Hartley Library in Southampton (where Mountbatten’s archives were stored), the Public Records Office in Kew (where official British documents were stored), the archives of the State Department of the USA, the National Archives in Washington, and the Library of Congress.

Radcliffe was not pleased with the work he had done. He refused to take any compensation from the British government and never returned to the Subcontinent, saying that he would not survive for very long after his arrival in either country

In 2005 his findings were published in India and later in the UK and the US in book form entitled, The Shadow of the Great Game: The Untold Story of India’s Partition. The book won endorsements from Mark Tully of the BBC, Martin Gilbert, Churchill’s biographer, and Jaswant Singh, biographer of Jinnah. It had been reviewed in draft form by the well-known UCLA historian Stanley Wolpert and others.

But the provocative book was largely ignored until the film, Viceroy’s House, came out last year on the 70th anniversary of Partition. Ambassador Sarila’s book formed the basis for the film, along with the much better known book, “Freedom at Midnight.” The film’s director said that Prince Charles had drawn her attention to Sarila’s book, so it had been read by the British Royals.

In many ways, Sarila’s book covers familiar ground about why India was partitioned. But it breaks new ground by making three main points. First, that without Churchill, Pakistan would probably not have been created. Second, that India was divided by the British not to save Muslims from the Hindus, but to preserve Britain’s strategic interests in the region. And, third, that the boundary line between India and Pakistan was not drawn for the first time by Radcliffe. It had been drawn earlier by Lord Wavell.

To some extent, the first two points have also been made in recent histories of the Partition. But the last point is entirely unique to this book.

Lord Archibald Wavell served as the penultimate viceroy of India, from 1943 to early 1947. He carried the rank of field marshal and had commanded British troops during the Second World War in North Africa. Early on, he had defeated the Italians in Abyssinia and Cyrenica and attained the status of a popular hero in Britain. But eventually he was defeated by Rommel’s Arika Corps.

That defeat did not go over well with Winston Churchill. The prime minister removed him from the Middle East command and sent him to the relatively calm waters of India. Says Sarila, “The irony is that one whom Churchill considered so mediocre has come to be acknowledged by several historians as the most important viceroy of India since Lord Curzon.” 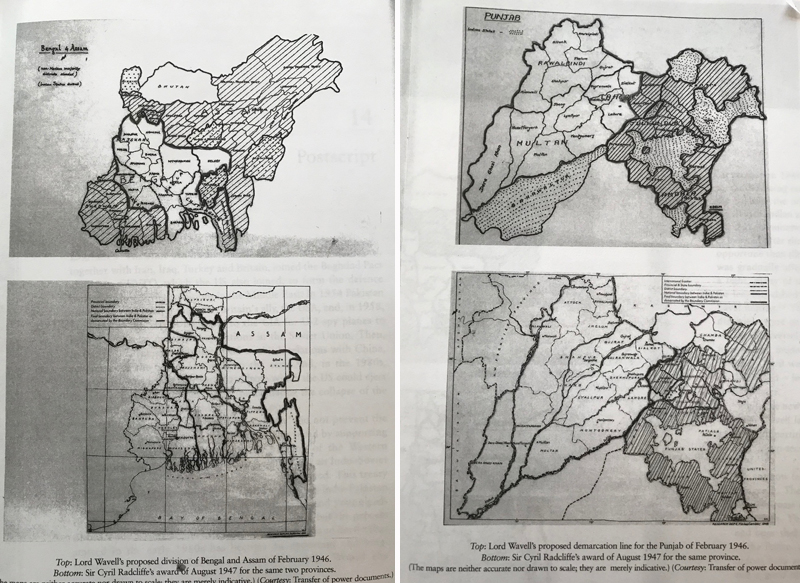 On arriving in India, Sarila tells us, Wavell arrived at four conclusions. First, India’s usefulness to Britain in the future would lie in the field of defence, not as a market for British products. Second, Britain would have to withdraw from India soon after the war ended. Third, the Congress Party of India, which had been hostile to Britain during the Second World War, and whose leaders had been imprisoned for years by the British, were unlikely to cooperate with Britain in matters of defence and foreign policy. And, fourth, the breach caused to Britain’s ability to defend its interests in the Middle East by granting independence to India could be plugged if Jinnah’s Muslim League, none of whose leaders had served time in jail during the British Raj, could be recruited to the cause.

There was hope that the Muslims would cooperate with the British because Wavell’s predecessor, Lord Linlithgow, had built up ties with Jinnah during the Second World War in 1940. Sir Stafford Cripps, Lord Privy Seal, had met Jinnah in Delhi on March 25, 1942, and noted that Jinnah ‘was rather surprised in the distance” that the British offer “went to meet the Pakistan case.’

Wavell discussed these matters with Churchill in March 1945 in London. Henoted in his memoir, “Viceroy’s Diaries,” that the prime minister envisaged the division of India. And then Sarila provides the reader with a bombshell.

As is well known, Jinnah had wanted the British to divide India and create Pakistan. But he did not want the British to partition either Punjab or Bengal; he wanted them both given undivided to Pakistan, along an 800-mile corridor that would connect them by way of Delhi. Of course, this was not acceptable to Congress.

Sarila contends that, based on his reading of the materials in the secret archives, ‘The plan for the smaller Pakistan was not worked out by Mountbatten in 1947, as generally believed, but by Lord Wavell in 1945, who submitted his detailed blueprint to London in February 1946… This blueprint was implemented at the time of the British withdrawal from India in 1947, even though it was kept secret to avoid any impression of a British initiative or hand in the division of India.’

The author concedes that “secret archives cannot be depended upon to reveal the entire picture. Many decisions that are taken by governments are never committed to paper or, if so committed, are not revealed, even after the archives have been released to the public.”

And then he goes on to provide copies of Wavell’s maps and the maps that are associated with Radcliffe to show the similarity of the boundary lines drawn by both. The resemblance is indeed remarkable.

Sadly, the book only has a few pages to discuss this original contribution in the book. And the maps are presented without virtually any discussion. So many questions remain unanswered about the authenticity of its claims.

More documents will be declassified as time passes. Future historians will almost certainly dig deeper into the matter and come to either validate or invalidate Sarila’s assertions. If they are validated, many history books will need to be updated since all of them say the boundary was drawn by Radcliffe.

The writer has authored, “Rethinking the National Security of Pakistan.” Ahmadfaruqui@gmail.com