‘People’s Movements in Pakistan’ – an account of political struggle

Being a participant in many nonviolent socialist movements, particularly movements of trade unions and movements against General Zia’s regime, the writer has inked personal experiences and accounts of people who exceptionally devoted their lives for other’s rights and freedoms 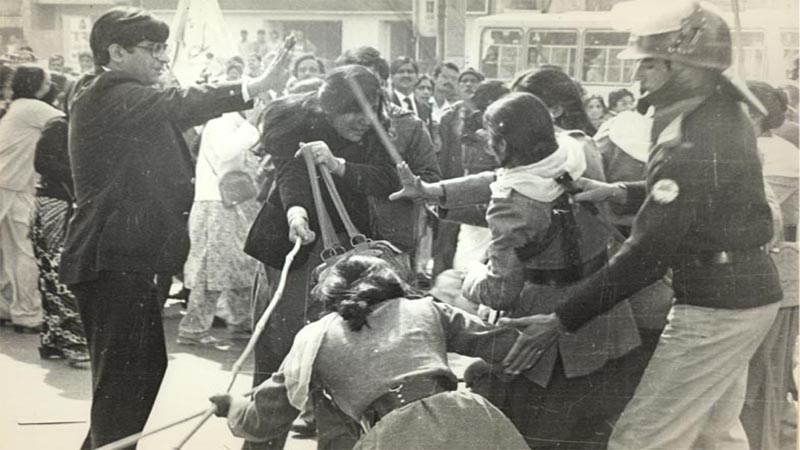 The book under review, ‘People’s Movements in Pakistan’ by Aslam Khwaja is a groundbreaking piece of work on the nonviolent struggles of Pakistan. Despite the fact that nonviolence and democratic culture is deeply rooted in the Pakistani social fabric, the least amount of work has been done by scholars and academics on nonviolent political struggle. In this book, Mr. Khwaja has tried to compile all facets of nonviolent struggles in Pakistan, ranging from civil disobedience against General Zia’s regime to movements for freedom of press, student movements to women’s movements for rights, struggle of trade unions against economic exploitation, and Balochistan’s struggle for greater share from the centre. The author explains the nature of these movements in the context of Pakistan’s political and social culture.

The book reveals the fact that a majority of nonviolent movements including civil disobedience, movement of art and literature, women’s struggle for their rights, and movements for freedom of press and expression had been waged against General Zia-ul-Haq. Moreover, it also informs that nonviolent struggles in Pakistan are more successful, as almost all these struggles were successful in achieving their desired results. Mr. Khwaja’s analysis helps in understanding the nature of Pakistan’s social and political fabric, contrary to popular international belief. Pakistan is a democratic and  tolerant society. Unsung heroes who devoted their lives for the rights of their community, ethnicity, and freedom have been discussed in the book detail. Being a participant in many nonviolent socialist movements, particularly movements of trade unions and movements against General Zia’s regime, he has inked personal experiences and accounts of people who exceptionally devoted their lives for other’s rights and freedoms.

Mr. Khwaja digs deep in the history of Balochistan and identifies that most of the Baloch movements of nonviolence against the government were based on misperceptions. While narrating the historic events of these struggles, he opines that military and civil bureaucracy played a vital role in creating the misperceptions between the Baloch people and Federal government. Moreover, unlike the popular belief of external role in these movements, Mr. Khwaja considers geography and policies of successive governments as central factors in exacerbating the Baloch crisis.

While narrating the civil disobedience movement against General Zia ul Haq, Mr. Khwaja describes numerous motivations, aspects, and the role of political forces in those movements. He has discussed in detail the role of different political parties, their internal differences, challenges to the civil disobedience movement, and reaction of the military regime. The writer is of the opinion that though society was overall exhausted by Zia’s policies, internal differences of different political parties helped Zia linger on his rule in Pakistan (p. 222). Though, the struggle couldn’t obtain its desired results during Zia’s lifetime, yet it helped political forces to secure democracy in the country after Zia’s death.

Mr Khwaja informs that there has been a long history of exploitation of traders and the labour force by industrialists before 1947. He says that there were no standard wages for labour, and industrialists used to slash wages of labour per their own wishes (p.280) while the British Raj did not take any action to give relief to the labour force as well. However, the political struggle of various segments of society against the British encouraged the traders and labour class to stand against this exploitation, which improved their living and working standards. After independence, trade unions tried to unify many times; however, political parties often used these trade unions for their political agendas. The writer mentions various kinds of tactical changes such as the release of union members by martial law authorities, increase of salaries, etc. in response to some movements (p. 386). However, he does not mention the contribution of trade unions towards structural changes in favour of trade unions.

In his chapter on peasants, Mr Khawaja discusses various peasant movements all across the country. His invaluable personal information about leaders and activists for peasants is commendable. He discusses numerous peasant leaders and their struggle for the rights of peasants. However, he accounts that peasant movements have never spread at the national level as other movements do (426-429), rather these movements have been confined to one province or within one or two districts. He doesn’t mention the reason of this confinement though. The writer further adds that peasants are still suffering in the rural areas of Punjab, Sindh and Balochistan, and through their compelling stories, one can predict that there are prospects of nonviolent struggle in the future against the agricultural elite by this segment of society.

Mr. Khwaja has given an exhaustive analysis on the impact of General Zia-ul-Haq’s policies on the social and political fabric as well as the response of different segments of society to his policies. He describes in detail the dilemmas that were faced by the Pakistani society during the 1980s, of which the Islamization process by General Zia-ul-Haq created a stringent environment for art, culture and literature in the country. Artists faced grim economic and social problems over the showcasing of their art. He also narrates how women faced a stringent environment for education and professional development. He narrates the struggle of a Pathan woman Shayam from Charsada, the struggle of Malala Yousafzai for education (p. 512), the role of All Pakistan Women Association (APWA) for equal rights at various levels of society (p.528), the role of women such as that of Begum Abida Malik, Inayat Begum, Zakia Kaniz and others to protect and defend the Family Law Ordinance (1961)  threatened by General Zia during 1978 (p. 526). Mr. Khwaja has shown pleasure over the courage and struggle by women from underdeveloped areas. He believes that the women of Pakistan have now achieved many rights, and he is optimistic that in the coming decades the situation will be further improved.

Overall, the book is true a reflection of the Pakistani society. It illustrates that democracy and nonviolence are deeply embedded in Pakistani society. It has given a complete history of the 20th century nonviolent movements in Pakistan, which will be highly helpful in understanding the nature and motivations of nonviolent movements in the country during the 21st century. Since 2007, Pakistan has been witnessing a new wave of nonviolent civil resistance from various segments of society including lawyers, politicians, religio-political parties, doctors, teachers, oil tanker and farmers’ associations, etc. In this backdrop, reading this book will be able to enrich one’s experience and knowledge of many scholars and policymakers who are interested in nonviolent civil resistance.

Largely, this book dispels two popular believes of Pakistani intelligentsia. Firstly, it dispels the impression of policymaking circles and scholars about the changing nature of Pakistani politics. This book has revealed that Pakistani politics and society has been confronting nonviolent struggle from different segments of society since its inception. Hence, it is not a new phenomenon. Secondly, it also dispels the popular believe that nonviolent movements create instability in society and could be harmful for democracy. The author argues time and again that these nonviolent movements are indispensible for social mobilisation and consolidation of democratic norms among different segments of society.

Policymakers, scholars and students of Pakistani politics must read this book to understand Pakistan’s social and political fabric, internal operationalisation of political/social movements, and behaviour of participants of nonviolent struggle. It is highly likely that after reading this book a reader’s mind and opinion about Pakistani politics and recent nonviolent struggles in the country will change.