Bhutto, a son of Sindh, was the most popular leader in Punjab

‘A leader leads by example not by force.’ The same is the case with Mr Zulifkar Ali Bhutto whose judicial murder would have been sunk into oblivion by the people, had it been the murder of a person alone. However, his assassination was a deliberate attempt to eliminate an ideology which survives for a rise against any such act. The more you press, the more it rises.

Whenever the leaders are put to a sacrificial death, history is a witness to the fact that the killers expire but the leaders are immortalised for good. Today, the names of Messiah (PBUH), Mansoor (RZ), Sarmad (RZ) and Imam Hussain (AS) are referred as the metaphor of courage, truth and honour. Truly, Bhutto, following the footsteps of the great souls, accepted to be hanged instead of changing its course leading to immortality.

The establishment of Pakistan under the dynamic leadership of Quaid-e-Azam Muhammad Ali Jinnah was, in fact, the foundation of a constitutional as well as welfare state based on religious freedom, social equality and independent foreign policy. Unfortunately, Pakistan was kept away not less than 25 years from these principles. Then Zulifkar Ali Bhutto came and challenged the status quo and gave a clarion call to the nation. He knew a leader breads leaders and not sightless followers.

Mr. Bhutto came into contact with the masses in far and near places of the country. Undoubtedly he was a towering scholar, thinker and orator. He was able to enthral the audience through his rhetoric. He infused a new sprit in the nation and awoke them from their deep slumber. At this, the nation decided to challenge the supremacy of so-called leaders of the nation.

It was Mr Bhutto who taught the nation that the democracy is another name of fundamental rights which can only be acquired through ballot. So the sanctity of vote is essential in democracy. Furthermore, he let the people know through his speeches that freedom of expression, vote casting, independence of judiciary, supremacy of parliament, good governance etc. are the part and parcel of democracy. Bhutto was the people’s man and the people were the Bhutto in themselves. Such was the love for the nation that Bhutto sacrificed his life for the people.

Zulifkar Ali Bhutto came to power after dismemberment of Pakistan when the nation was in low spirits. He led the nation from the front and brought them out of gloom. Within short span of time, Zulfikar Ali Bhutto was able to get consensus on constitution 1973 from the parliament and the nation. He cultivated social reforms, equality and reaped a social revolution in return. He also formulated independent foreign policy and founded nuclear program despite opposition from all over the world. In this way, he accomplished miraculous achievements without disturbing the masses.

At that time, Pakistan seemed to be moulding in lines with the ideas fashioned by the father of the nation. Mr. Bhutto held the premiership after dismemberment of Pakistan when the country was divided on ethnic lines. However, his dynamic leadership turned the depressed as well as a defeated nation into a peaceful and progressive nation in a few years of his rule. Sectarian as well as ethnic prides and prejudices were on the wane.

Son of the Sindh’s soil was the most popular leader in the Punjab province. Every nationality and sub-nationality used to acknowledge him as their leader. The ideas of Bulleh Shah and the slogan of Roti Kapra aur Makan was getting popularity in the country. Hundreds of thousand people got employment both at home and abroad. Habib Jalib’s indication of 20 families rule in the country was taken seriously at state level and a system based on social equality was founded and flourished.

The idea of security state has nudged idea of welfare state away in the country. Conservatism bred extremism which has now taken shape of terrorism. The poor have lost confidence in the state and society. At this stage, we need to resurrect the Bhutto’s philosophy

It’s a proven fact the foreign policy of Pakistan during Bhutto’s rule was the best in the history of Pakistan. Shimla agreement, inked between Pakistan and India, levelled the ground for durable peace in the South Asia. Isn’t the subcontinent remained away from the war between the nuclear neighbours.

Pakistan emerged as the leader of Muslim as well as third world. However, his accomplishments were not matching with the designs of so-called political architects at home and abroad. 39 years ago, a dark night delivered a son who assassinated the leader and the efforts to put the leader’s ideas to death are still under way. For the dictator, the constitution was just some pieces of paper. He tried his best to abolish the constitution but in vain. Just to suppress the Vox populi, the dictator encouraged the sectarian and ethnic groups to take hold in the country. 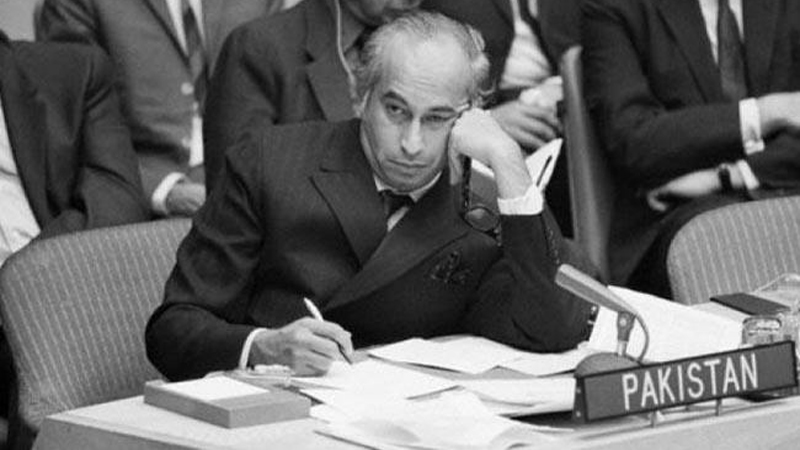 He fully backed and fashioned the politics based on caste, creed and the capital. He discouraged and crushed the real political workers so that the people might be averse to democracy in the country. The system based on darkness was challenged by an unarmed Daughter of the East. She came forward and did bind the four provinces in a single chain of love and patriotism.

At this, the conspiracy was hatched to kill the Daughter of the East and unfasten the chain that tied the four provinces. At that time the flag of unity was about to be fallen when a man called Asif Zardari came forward and raised the slogan: Pakistan Khuppey (Long Live Pakistan). In this way he hoisted the flag of unity once again and healed the federation’s wounds. Instead of taking revenge, Chairman Bilawal Bhutto raised another slogan: Democracy is the best revenge. Thus, they proved themselves to be true democrats and left their opponents squirmed who in retaliation accelerated the pace of their conspiracies. The adversaries dished out the certificates of infidel and traitor in abundance.

Today’s Pakistan is far away from Jinnah’s vision and Bhutto’s philosophy. Constitution is not given significance. Disguised monarchy instead of democracy is being fashioned. A common man cannot even think of becoming member parliament. Plots are being hatched against the only party which is representative of federation in the country. Unfortunately, some families are given preference over the masses. The country’s prestige is at stake due to failed foreign policy.

The idea of security state has nudged idea of welfare state away in the country. Conservatism bred extremism which has now taken shape of terrorism now. The poor people have almost lost hope from the state and the society. At this stage, we need to resurrect the Bhutto’s philosophy and ideas to save the country in the eye of the storm.