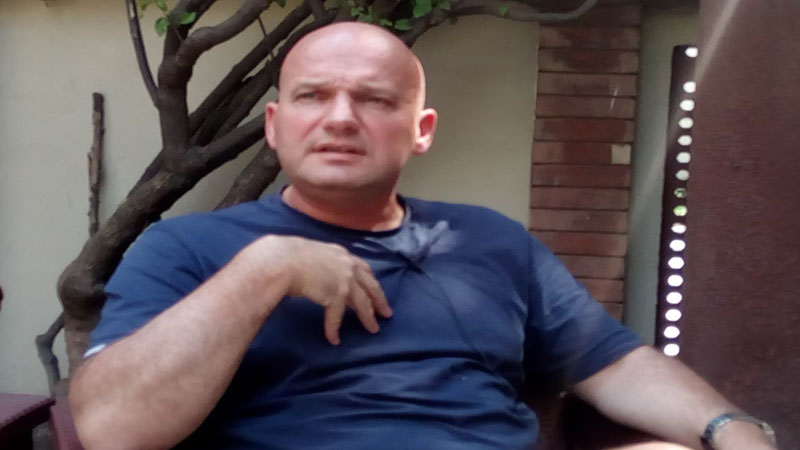 Marc Brummund a writer, director and producer from Germany came to Pakistan to share his film making experience with young film students. He worked with film students from various universities to create TV commercials for social awareness under the platform of Annemarie Schimmel Haus. 14 days of activity produced 5 ads for Red Cross organisation.

Brummund’s last film ‘Freistatt’ (The Sanctuary) was selected by the German film festival and was screened in Lahore last year that motivated him to collaborate with film schools in Pakistan. Brummund’s film attracted many young filmmakers to learn best practices from German film scene. “Students should be encouraged and told to approach local clients that would establish a platform for film students to work more freely, that is how film industry could grow in Pakistan.” Brummund says.

Brummund had studied psychology and journalism along with film making that he passionately expresses through his documentaries, commercials and films. “It is most important for students to adapt to their own situation, you never know when are you going to do your next movie and young film makers fight hard to achieve the funding from producers and broadcasting commissions for directing a film.” He emphasised film students to focus on issues that they have a strong command on, since a career in film making depends on their previous work.

He explained how many German film makers have reached heights by realising their situation and coming together at Berlin Film School as they created a wave of a particular way of storytelling that evolved the European cinema. Many film makers were picked up by the businesses in Europe as well as by Hollywood to take their storytelling further, now this has been taken up by the television industry in Germany too and international audience is now also getting attracted towards it. He explained how films are evolving in Germany and said, “social drama is what German cinema is known for yet other genres like light comedies are also making a place among the Europeans unlike Bollywood stereotypes that are widely famous here and are being adapted in Pakistan.” In Germany the cinema struggled with a particular genre but the film makers realised that in order to grow, the stereotypes should be broken, “Holocaust movies generally make it to Oscars or other famous awards but I try to combine relevant social issues such as dark education and such issues are making big in European cinema now.,” he added

Brummund expressed his concerns for film festivals as well. “A lot of festival’s management like Biennale in Germany like to define a particular way of film making and they said to me I can’t make a film in a non-conventional way but I did and the audience liked it internationally which was my goal. It should be the goal of film makers here in Pakistan too.”

While explaining short films, he said “these are like your business cards, even in Pakistan film students experiment quite frequently on short films but when it comes to feature lengths, students are bound to work for a particular genre which is the colourful dance types form bollywood and that is a huge restriction for film students in Pakistan.”

Brummund thinks there are no general things that make film industries great, individual work should pop up every now than that blows you away. “A general rule should not govern the art of film making.”

He added, “I, being the member of German Film Academy, promote such practices. Many actors come out and develop their skills as an individual and start working for French, Italian and English cinema along with other international markets while Pakistan struggles with a ‘rule’ about films that should be evolved by the film makers and film students. A wide range of films should be entertained in Pakistan to solve such concerns.”

While commenting on film makers in Pakistan, Brummund expressed his gratitude for film makers that have contributed to film making and have achieved international acclaim like Sharmeen Obaid Chinoi “She won Academy Awards twice for her work yet she was taken as a person focusing only on the negativity in Pakistan. They should see it as a form of art and not as a societal frame of mind. I loved the closeness to the people she portrayed in her movies.” Brummund expressed how Chinoy’s work has influenced many film makers and documentarians in Europe as well.

He urged film makers to question storytelling not just on tabooed controversial issues, but also as an artist that gets the attention of film associations. Brummund said “before 70s, Germany struggled with a lot of censorships and bans but the individual work paved in slowly and changed the entire idea of perceiving films in Germany. It’s not the same in the rest of Europe but they define their scenario differently yet openely.” Brummund expressed his future plan for figuring out German-Pakistan co-production for organic stories that play a part in both societies, which should address a more realistic relationship between Germany and Pakistan.

He concluded “more facts should be added to the drama in the films in Pakistan that could significantly improve film making both for audience as well as for the industry here. It would promote culture as well as significantly attract funding for film students. As an artist, all film makers should strive to work for a cause.”

National film awards in Germany are scheduled in April and films by individual artists will be nominated, Brummund’s film is also nominated for this year’s national awards.