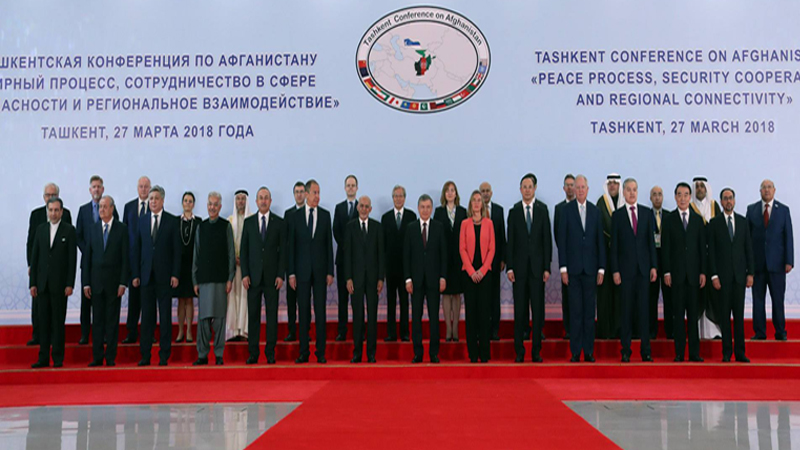 ISLAMABAD: An international peace conference in the Uzbek capital of Tashkent on Tuesday while calling for direct talks between Afghan government and the reconcilable elements within the Taliban emphasized that a political settlement was the best way to end violence in the war-torn country.

Foreign Minister Khawaja Asif led a high-level Pakistani delegation at the two-day conference on ‘Peace Process, Security Cooperation and Regional Connectivity’, which endorsed the National Unity Government’s offer of direct talks with the Taliban without any preconditions with the ultimate goal of reaching a comprehensive peace agreement also backed by the international community.

The ‘Tashkent Declaration’ issued at the conference called upon the Taliban to accept offer for a peace process that is Afghan-led and Afghan-owned and is in accordance with the relevant resolutions of the United Nations General Assembly and the Security Council.

The participants reiterated their support to the efforts of the Afghan government to begin direct talks with the Taliban. They acknowledged that the ‘Kabul Process’ was the main forum and vehicle along with other regional and international initiatives on Afghanistan. “We call on the Taliban to recognise their share of responsibility for bringing peace and security to Afghanistan in order to end the suffering of the Afghan people and officially declare their willingness for entering into direct peace talks with the Government of Afghanistan with full support from the international community through a mutually agreed format,” the declaration said.

The participants urged the Afghan government and the Taliban to move towards a political settlement, adding that an inclusive peace agreement will be a victory for all the parties and a defeat for none.”It should guarantee the inclusion of the Taliban in the political process as a legitimate political actor, the renunciation by the Taliban of violence and breaking of all ties to international terrorism, including Al-Qaeda, Daesh and other Transnational Terrorist Networks (TTNs), as well as the respect of the Afghan Constitution including the equal rights of all Afghans,” the declaration said.

The participants offered their support to the Afghan government in creating favourable conditions for the start and progress of the peace talks through provision of effective incentives and opposing those who prove themselves irreconcilable to peace, continue to commit violence, bloodshed and atrocities and provide assistance to terrorist networks.

The declaration stressed the importance of full and meaningful participation of women in Afghan reconciliation, security and economy.The participants pledged continued support for international efforts aimed at Afghan women’s empowerment and vowed to remain fully committed to support the implementation of the Afghanistan’s national action plan on women, peace and security.

The declaration called on all the countries to respect the sovereignty and territorial integrity of Afghanistan and adhere to the policy of non-interference in its internal affairs in order to achieve a peaceful country from where terrorism is not able to threaten other countries and which can fully rely on its own forces in ensuring security within its territory.

The delegates emphasized the importance of regional and international cooperation for the elimination of terrorism in all its forms and manifestations in accordance with the UN Global Counter-Terrorism Strategy and relevant UNSC resolutions,

They affirmed that all security assistance to Afghanistan should be provided through the Afghan government and strongly opposed any provision of financial support, material assistance or arms to the Taliban and ISIS.

Speaking at the conference, Foreign Minister Khwaja Asif said that bringing Taliban to the table and establishing peace and stability in Afghanistan was a shared responsibility of the international community, according to a statement released by the Foreign Office.

The minister stressed the need for collective pressure on Taliban to force them to avail this opportunity to shun violence and join the peace process. He reiterated Pakistan’s support for Afghan President Ashraf Ghani’s national peace and reconciliation plan unveiled during Kabul Process meeting on February 28 and his offer of peace talks to the Taliban under an Afghan-led and Afghan-owned process.

The foreign minister expressed concern over unchecked proliferation of Daesh and phenomenal increase in the drug production in Afghanistan.He emphasized the need for cooperation between Afghanistan and its neighbours to prevent cross-border movement of terrorists and criminal networks, adding that Pakistan’s proposal titled ‘Afghanistan-Pakistan Action Plan for Peace and Solidarity’ was aimed at developing mechanisms for bilateral cooperation in security, counter-terrorism, border controls and smooth return of Afghan refugees to Afghanistan.