Pakistan’s history is marked by an inequality of voting among its citizens. In 1955, the infamous One-Unit Scheme created an enormous imbalance between then East and West Pakistan, while the Federally Administered Tribal Areas (FATA) struggled for equal civil and political rights. All of this has contributed to ethnic fault lines which run deep in Pakistani society. Such inequality of the vote was also observed during the 2013 general elections. One constituency, Haripur (NA-19), had over 500 percent more registered voters than FATA’s Tribal Areas VI (NA-41), with the former tallying 531,685 voters and the latter just 92,719 voters (see another Briefing Paper by Democracy Reporting International for more on this).

This substantial variation in voters distorts the equality of the vote, meaning that the vote of each Pakistani is not counted as equal; in this extreme example, it means that a voter in Haripur had five times as more power than a voter in FATA. Such large deviations do not provide an equal playing field to candidates in these constituencies. Similar trends were observed in local government elections in Sindh and Punjab in 2014, and as a result the high courts of Sindh and Punjab, declared that the delimitation of electoral constituencies was unconstitutional, citing the large variations in the sizes of constituencies, among other reasons. Consequently, local elections in both provinces were postponed at the last minute.

While the ECP has explained why there are some variations in a few constituencies — by mainly citing geographic preferences and provincial and district seat quotas — the release of reasons for all variations will be helpful for the public and concerned stakeholders. Maps of the constituency boundaries would also be useful to understand changes in geographic boundaries for electoral constituencies

To address these problems, Pakistan’s parliament recently passed historic electoral reforms legislation, the Election Act 2017. Among other changes, the Act limits the variation in constituency sizes to a maximum of 10 percent, in line with international practice. However, the Act required officially published census data to carry out fresh delimitation. The final census results have not been officially published, so the political parties passed a constitutional amendment in December 2017 that enables the Election Commission of Pakistan (ECP) to use provisional census data. In addition to the Election Act, the ECP issued Election Rules 2017, which provided more detailed rules than before, which has been a positive achievement. The ECP has also tried to regulate the conduct of delimitation for the first time. 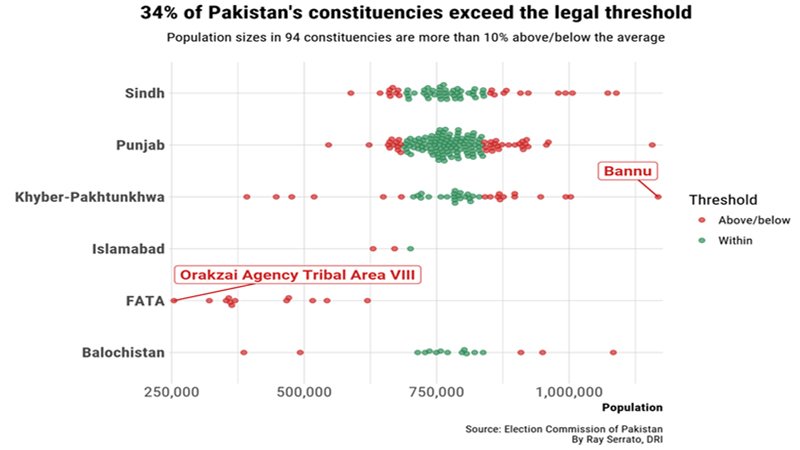 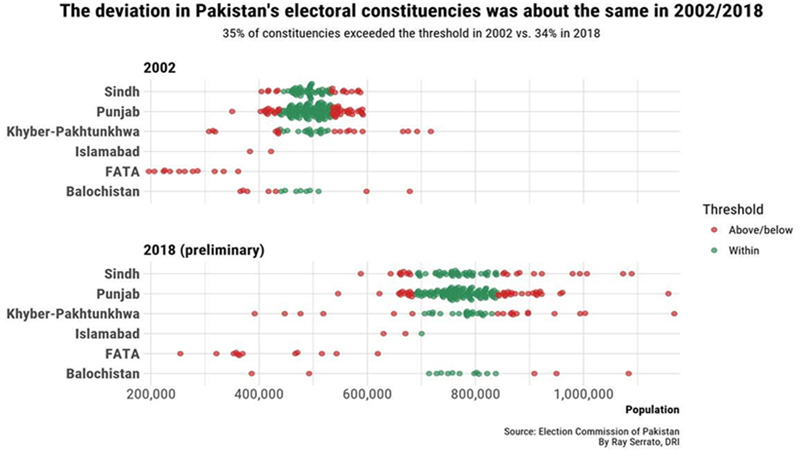 Using the Election Act and Election Rules, the ECP has been undertaking the delimitation of electoral constituencies for national and provincial assemblies since January 2018 and released preliminary delimitation results for public comments in March. In this analysis, we look at the preliminary results to assess if the issue of inequality has been addressed and, if not, why the law has not been useful.

How is the size of constituencies determined?

The new Election Act specifies that the variation in the population of electoral constituencies should “not ordinarily exceed ten percent.” However, neither the Act nor its rules elaborate on how we should assess if a constituency exceeds this threshold. Pakistan’s Constitution makes clear that the seat allocation in the National Assembly should be based on the population in each province, using the last official census. In other words, seats should represent a roughly equal number of people in each province’s constituencies, achieving the principle of ‘one person, one vote’, meaning, the vote of each citizen of the country should count equally. International organisations like the Venice Commission and the Organisation for Security and Cooperation in Europe suggest that countries should delimit their electoral boundaries so that the population in each constituency does not deviate by more than 10 percent from the average number of voters or inhabitants in constituencies — for the entire chamber representing citizens. However, many countries struggle to stay within this margin, in particular due to geographic and demographic features. 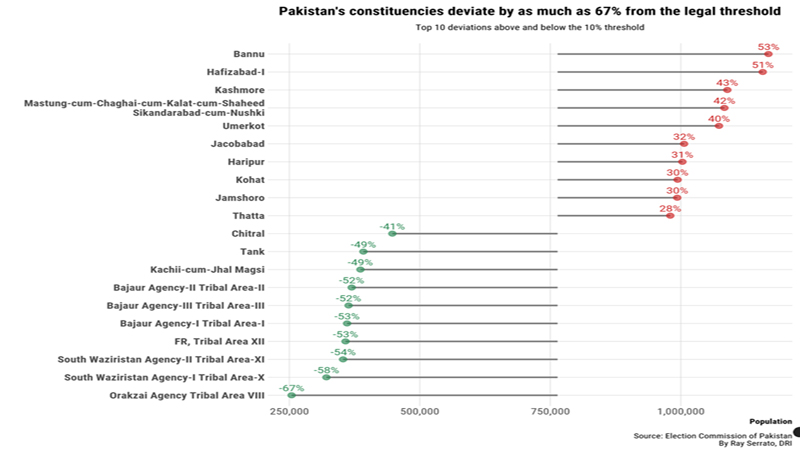 In delimiting the constituencies, the ECP has calculated a population quota per seat based on the number of seats allocated to each province in the constitution. For example, as per the provisional census, Khyber-Pakhtunkhwa has a population of 30,523,371 and it has been allocated 39 seats in the National Assembly. Based on this, the average population of a constituency — or the per seat quota — for the province is 782,651. This quota is then used to calculate the number of seats for each district. This way of first determining the number of seats per province appears to reflect the constitutional provisions (although it does not help to ensure the idea of an equal vote across Pakistan, as it should not matter in which province a citizen lives).

Our analysis — based on the preliminary census results — shows that 94 constituencies, or 34 percent, have population sizes that are larger or smaller than the 10 percent threshold set in the Election Act.

While the ECP has explained why there are some variations in a few constituencies — by mainly citing geographic preferences and provincial and district seat quotas — the release of reasons for all variations will be helpful for the public and concerned stakeholders. Maps of the constituency boundaries would also be useful to understand changes in geographic boundaries for electoral constituencies.

The Election Act 2017 defined broader criteria and principles for delimitation, requiring that attention be paid to geographical continuity, communication infrastructure and homogeneity of the population, where possible. The law does not state which criteria should have preference (in other countries the 10 percent variation is the rule and deviations should be treated as exceptions that need a strong justification). Thus, the task of making this criterion operational was left to the discretion of the ECP. Given the lack of a clear provision, the ECP’s choices can be justified by the language of the law, as could other choices.

Parliamentarians are in practice, often asked by voters to support their individual requests with administrative bodies in the district, even though they have no such mandate. Their primary job should be legislation, scrutiny of government actions and representing citizens at the national level. Therefore, the arguments for mirroring administrative and electoral boundaries are at best, debatable.

How does it compare to past delimitations?

The chart below compares the electoral constituencies for 2002 delimitation, which the 2013 elections used, and 2018’s preliminary delimitation results, highlighting that the variations in population have significantly increased in 2018. While there has been a substantive increase in the population, a comparison of the two delimitation exercises reveal that many more constituencies ran across several administrative boundaries (approx. 35 with 2002 boundaries vs. only 10 in 2018). However, the deviation in 2002 constituencies is nearly the same in 2018.

FATA has been allocated 12 seats, although its total population is much lower compared to all other provinces. However, this disproportionate allocation of seats to FATA is understood as an affirmative measure because FATA does not have a Provincial Assembly and it does not have representation in any other Provincial Assembly, so it is allocated additional seats in the National Assembly. At the same time, the utility of these seats are questionable since the federal parliament (National Assembly and Senate) cannot pass any legislation for FATA, except for constitutional amendments; only the President of Pakistan is mandated to issue legislation for FATA. The result of these additional seats, however, creates constituency sizes which fall far below the average and the 10 percent threshold in the Election Act. In addition, the disjointed areas of the Frontier Regions in FATA represent one constituency. This is allowed by law, but internationally accepted principles of delimitation suggest maintaining geographical continuity in electoral constituencies.

As required by the Act, the ECP to release the reasons why constituencies exceed the 10 percent threshold.

Hassan Nasir Mirbahar is the Country Representative of Democracy Reporting International in Pakistan. Find him on Twitter using @hassannasir