Bhagat Singh not a terrorist, but a freedom fighter, says ACS Punjab

'Every tiny molecule of Ash is in motion with my heat. I am such a Lunatic that I am free even in Jail' – Bhagat Singh 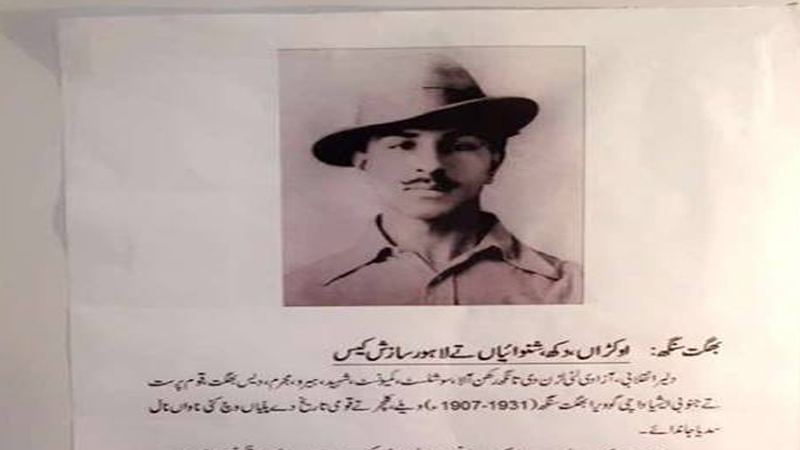 In honour of the 87th death anniversary of revolutionary hero and freedom fighter, Bhagat Singh, the Government of Punjab in collaboration with the Punjab Archives and National College of Arts resurrected the personality of the man of great valour and strength in its first of a kind national display at an exhibition in Lahore on Tuesday, 26th March 2018. 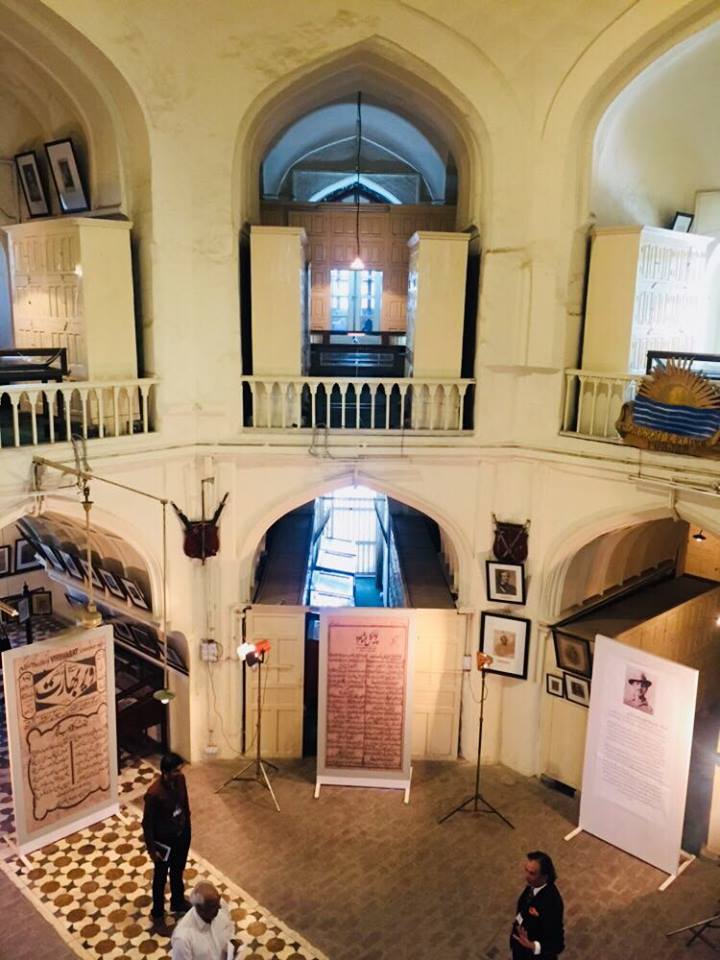 Singh’s legacy continues to stir the millions of ordinary souls throughout the Indian subcontinent even years after the remnants of a separation. In a moving epitaph recalled by the following words, ‘The Lahore Conspiracy Case’, Director Punjab Archives Abbas Chughtai opened for display an entire “literature of the revolutionary activities of Singh and his comrades” and commented on how the initiative brought to light the case file from the trial of the colonial-era freedom fighter and Lahori hero in what was titled, ‘Trials, Tribulations & The Lahore Conspiracy Case’.

Chughtai traced the story of Singh’s unfinished struggle for the greater cause of revolution, shedding light on the aftermath of a tragedy where Singh along with his accomplices planned to avenge the death of their revolutionary leader, Lala Lajpat Rai, who died at the hands of the British in a protest against the Simon Commission in Lahore.

“In a case of mistaken identity, Bhagat Singh with the help of Rajguru, Sukhdev, and Chandrashekar Azad, shot Superintendent of Police, John Saunders, about eight times, managing to escape from the scene into hiding. A year later in April 1929, he and his associate, Batukeshwar Dutt, threw bombs and showered leaflets in the Delhi Legislative Assembly, shouting their slogan ‘Inquilab Zindabad’. Singh did not resist his arrest, and it was during interrogation at this very point that the British came to know about his involvement in the death of John Saunders five months earlier, in the November of 1928,” he said.

On the 1st of May 1930, an emergency was declared by Lord Irwin and an ordinance introduced to set up a special tribunal to speed up the slow trial of Bhagat Singh. This decision was made to cut short the normal process of justice, as the only appeal after the tribunal was to the Privy Council in England. In the appeal to the Privy Council, the appellants claimed that the ordinance which created the tribunal was invalid while the government countered this with the claim that the Viceroy was completely empowered to create such an arrangement in order to curtail the activities of the revolutionary “terrorist”.

Responding to a question, Additional Chief Secretary Punjab Omer Rasul, stressed on Singh’s notable services for both Pakistan and India. “Singh was not a ‘terrorist’. He threw bombs in the New Delhi Assembly, where nobody was killed or hurt. What he said was only this: if the people have turned deaf, you need a bang to get yourself heard. This was his message to the people of India in the freedom struggle against the British,” said Rasul.

“Bhagat Singh was a true freedom-fighter and a hero of the Independence movement to the core,” he further went on to say. “Singh died at the age of 23 and made a point that the British must leave India to the hands of its people. He was narrated as the ‘greatest Indian ever’, which is why the Government of Punjab has taken this commendable step to show to the public his fight for freedom, not only in physical terms but by show of example, as he sacrificed his youth to the Indian freedom struggle based on his philosophy of autonomy, right to education and health for the people of his soil,” he added.

Amidst the melodious sounds of ghazal, ‘Piya bin chain nahi avat‘ – 1926, given voice by Khan Saheb Abdul Karim Khan, playing in a chilling repeat in the background, the exhibition showcases at the tomb of Anarkali, which also houses the prestigious Punjab Archives Department. The display has been open for access to the public till Sunday, the 1st of April, 2018. With this inaugural enterprise, the Punjab Archives wishes to set forth a precedent for future exhibitions to come and follow.

The exhibition displays in detail important historical documents and records, which include newspapers, books, and hotel records of where Singh and his comrades stayed during their hiding. It also includes letters written by the freedom fighter to his father from jail.

The ordinance introduced by the Viceroy to form the special tribunal was never approved by the Central Assembly or the British Parliament, and later, it eventually lapsed without any constitutional or legal sanctity. Singh’s trial has even been described by the Supreme Court as “contrary to the fundamental doctrine of criminal jurisprudence”.

Even so, Bhagat Singh and his comrades were hanged on 23 March 1931 at 7:30 pm, the schedule having moved forward by 11 hours to its original time. Singh, Rajguru and Sukhdev’s bodies were burnt, stuffed in gunny bags and their ashes dumped in the waves of the Sutlej river, miles from the Lahore Central Jail. 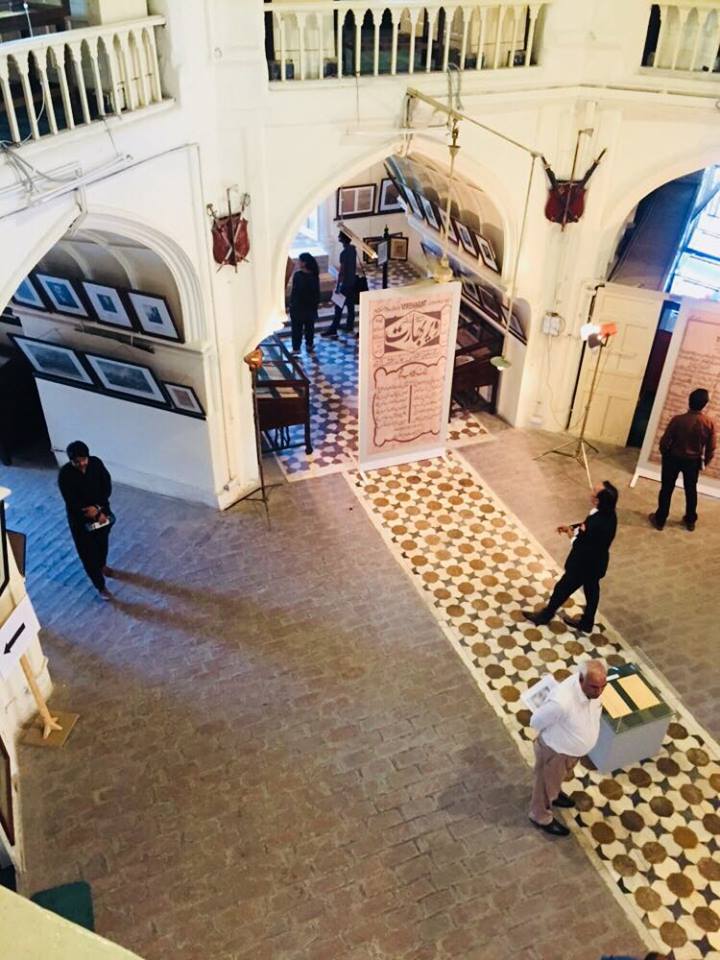 The death certificate of the legendary revolutionary, enclosed in a transparent box in the centre of the exhibition hall, reads the following: “I hereby certify that the sentence of death passed on Bhagat Singh has been duly executed, and that the said Bhagat Singh was accordingly hanged by the neck till he was dead at Lahore C. Jail on Monday the 23rd day of March 1931, at 7:30 pm; that the body remained suspended for a full hour, and was not taken down until life was ascertained by a medical officer to be extinct; and that no accident, error or other misadventure occurred.”

The death certificate is signed at the end by the Superintendent of the Jail present at that time. No magistrate was willing to supervise Bhagat Singh’s hanging as was required and deemed fit by law.

The writer is Editor Lifestyle and Culture at dailytimes.com.pk. She tweets @EeshahOmer and instagrams at instagram.com/eeshaww