Courts are not enemies, but friends of govt: CJP 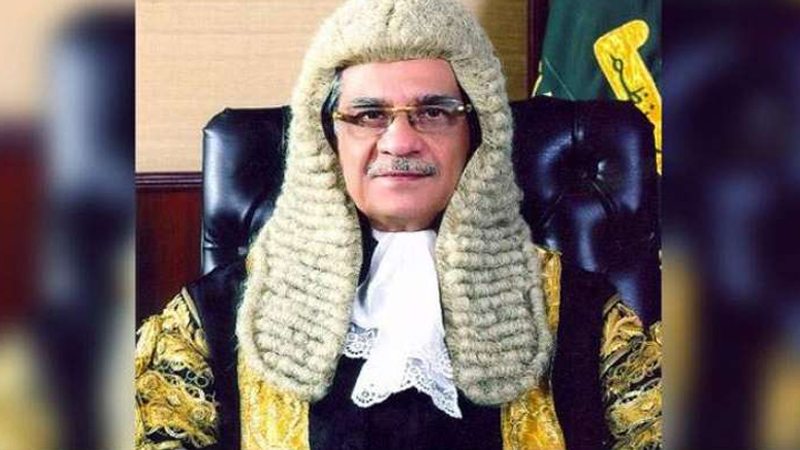 ISLAMABAD: Chief Justice of Pakistan Mian Saqib Nisar has remarked that the courts are friends of the public and government.

The remarks were made during a conversation of the chief justice and Interior Minister Ahsan Iqbal, who appeared in court on Monday after being summoned in a case pertaining to the hike in fees of identity cards for expatriates.

As the hearing went underway, the chief justice asked Iqbal if he was angry for being summoned. Iqbal said, “Where will we go after getting angry,” and highlighted the chief justice’s suo motu intervention on public issues.

He informed the chief justice of a court stay on an under-construction college that he is building in his hometown of Narowal, Punjab. The chief justice said that the minister should submit details of the case and assured him of resolution.

During the hearing, Iqbal assured the apex court that he would get the issue resolved by the federal cabinet during its next session and submit a report in two weeks as per the court’s direction.

The chief justice remarked that they have to ensure that overseas Pakistanis get voting rights.

Justice Ahsan remarked that the subsidy provided to locals should also be provided to foreign Pakistanis. However, Iqbal explained that overseas Pakistanis earn more and were thus charged accordingly.

Chief Justice Nisar also observed, as he has in earlier cases, the important role that overseas Pakistanis play in boosting the country’s economy and their love for the country. The hearing was then adjourned for two weeks.

At the last hearing of the case on March 19, the chief justice had summoned the interior minister and secretary to explain a summary regarding a hike in the NICOP fees.

The court was later informed that the interior minister and secretary were out of the city after which the hearing was adjourned until today. On March 21, 2017, the top judge had taken suo motu notice over the exorbitant fee being charged for the issuance of NICOP and cancellation of the Pakistan Origin Card (POC). The issue came into court’s notice after a non-resident Pakistani complained that the issuance fee for a POC had been increased to Rs 22,000, and the cancellation fee to Rs 31,500.

According to the complaint, the POC fee was earlier increased to $150 from $100 and then to Rs 22,000 for preparation and Rs 31,500 for cancellation of the card. The complainant alleged that the National Database and Registration Authority’s (NADRA) move had discouraged overseas Pakistanis to opt for the POC.

Reasoning the fee hike, NADRA representatives had claimed before the apex court last month that the price of the new chip-based smart identification card was comparatively high due to its distinctive features.