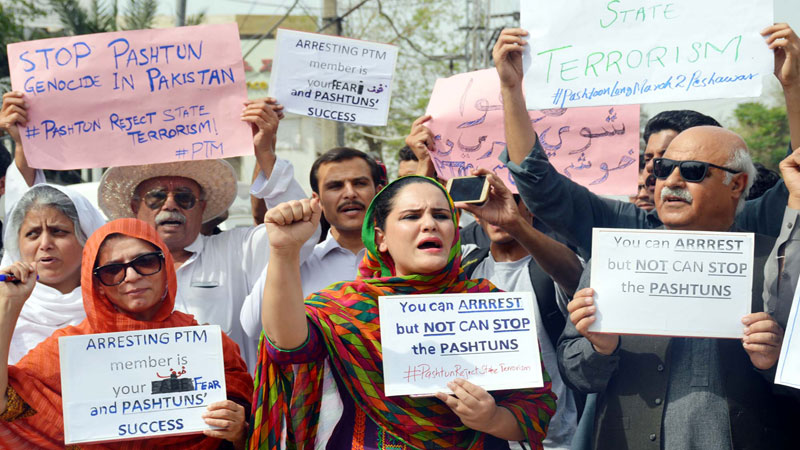 Peshawar: Demonstrations were held in dozens of cities across the country on Monday against reported incidents of illegal detention and harassment of activists of the Pashtun Tahafuz Movement (PTM) by law enforcement agencies.

In Peshawar, dozens of students, lawyers, social and political activists gathered in front of the Press Club.

The speakers said that freedom of expression was a right of every Pakistani citizen.

The protesting activists led by Dr Said Alam Mahsud, Shabina Ayaz, and Sana Ijaz carried placards and banners inscribed with slogans like ‘Stop Pakhtuns genocide’, ‘You can arrest but not stop the Pashtuns’.

Sana Ijaz criticised the role of the military establishment in the country’s politics. “Pashtuns have been alienated from their own soil, although we are living here since centuries. It’s the first time that we have to prove our patriotism everywhere in KP,” she said.

Another speakers asked, “When our struggle does not contradict to the Constitution, then why are they [law enforcement agencies] threatening and harassing us using unidentified telephone numbers?”

They said that on one hand the Pashtuns have been displaced from their native lands, but on the other hand, they are being humiliated on every check post in KP and FATA.

They alleged that missing persons from KP and FATA were in the custody of intelligence agencies and demanded that all of them should be presented in courts of law.

Criticising the mode of arrest of the killer of Naqeebullah Mehsud, Dr Syed Alam Mehsud said that by giving protocol to a killer the authorities had proved that it was ‘a friendly arrest’. He added that Rao Anwar should be dealt like other criminals. “Vanishing from the scene and avoiding his arrest for months is a clear proof that he is a murderer,” he said.

The protesters appealed that immediate action should be taken against all those within the security agencies who were responsible for enforced disappearances and missing persons should be produced in courts so that it could be reveled to the public if they had committed any crimes or if they were just being held in violation of the constitution.

The speakers said it was the state’s responsibility to provide protection to its citizens.

Protests in solidarity with the PTM activists were held in front of press clubs in Islamabad, Lahore, Karachi, Hyderabad, Quetta, Zhob, Killa Saifullah, and Ziarat. Besides activists of PTM, members of the Awami Workers Party and progressive students, trade union and lawyers association activists attended the protests.

With additional input from the News Desk.