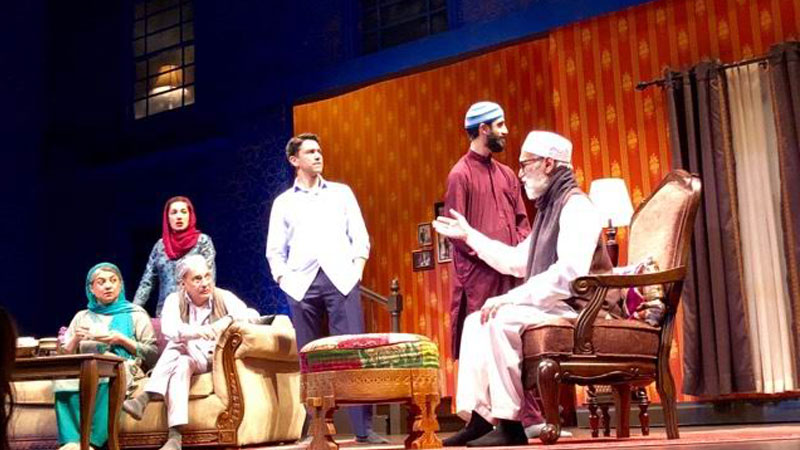 ‘An Ordinary Muslim’, a moving and powerful play about Pakistani-British Bhatti family living in London, is currently playing at the Off Broadway Theatre Workshop in New York City. In the play, Debutant playwright, Hammad Chaudry, explores the day-to- day struggles of the Bhatti family in the broader context of Islamophobia and nativism in the foreign society. The Bhatti saga is made even more relevant for American audiences by news of similar anti-immigrant emotions that are now occurring in the US.

Akeel Bhatti, a banker in West London, and his wife Saima Khan are British-born, coming from working-class Muslim parentage. His father, Azeem Bhatti who well connected in the local Pakistani religious community, is a hardworking man who spends his free time working with the Tablighi Jammat. At the same time, he is known to occasionally beat his wife. The son, Akeel, is a secular, liberal person, who constantly bashes religious traditions and practices. He has not visited a mosque in years and fiercely opposes the Tablighi Jammat visiting their home. When Saima, his wife, wants to go to work in her hijab he tells her “A good Muslim is an invisible Muslim” and advises her against it.

While these issues are interesting to Western audiences, one is tempted to say that art should not portray Pakistanis only in religious difficulties

Akeel who once said “This country is all I know.” and who barely understands Urdu, suddenly finds himself the victim of xenophobia and bigotry. Because of eating halal meat, not knowing his wines, and making a careless joke about radical Muslims in a job interview, he gets into trouble at work. While good at advising others to practice religion at home, not in the workplace, he himself frequently brings this topic up with co-workers. “We were once hated because of our skin color and now we are hated not only because of our skin color but also our religion.”

It is gradually becomes clear to the viewer that he suffers from an identity crisis – an immigrant caught between a tightly-knit local Pakistani religious community and the larger, rapidly changing British secular society. He shares his dilemma with the family “too Muslim for some, not Muslim enough for others.” Once over a beer, he slips out a shocking secret to a non-Pakistani co-worker about the resentment of British Muslims towards the larger society, “when I see a Muslim go after you, however big or small his resentment may be… I understand it; I get it. It’s hard not to.”

Emotions run high throughout the play as the family faces several struggles at personal and social levels. Most of the dialogues end up in conflicts even when it is clear that family members care for each other and mean the best. This brings out the complexities of lives and relationships of the South Asian diasporas in England. They are British citizens but in many ways, Pakistan has not left them. Even second-generation members of the family, who have never lived there, have nostalgic and romantic feelings about Pakistan.

While the struggle of drawing a balance between assimilation and keeping traditions alive is palpable, other more dramatic, tense and personalized events are happening in the family and Mr. Chaudry does not try to present a simple solution to the complex problems of this personal yet communal family saga. He uses humor and sarcasm very cleverly in this high-voltage drama to diffuse the tension he has built up in viewers.

“An Ordinary Muslim” brings back many issues that were dramatised in Ayad Akhtar’s play ‘Disgraced’ that played on Broadway a few years ago; failure of the protagonist to be successful in his profession because of being Muslim. Infidelity and other highly religious Muslim characters reminded audiences of ‘disgraced’.

While these issues are interesting to Western audiences, one is tempted to say that art should not portray Pakistanis only in religious difficulties. While religious, cultural and political identities are important topics in the current political world, repetitive presentations of these ideas begin to look like a lack of dramatic ideas and intellectual inertia.

The staging, with a backdrop of turquoise blue and gold behind hexagonal geometrical designs and a big medallion with Allah engraved on it, give a sense of Muslim tradition. While words in Urdu and prayers in (wrong) Arabic were used during the dialog, the audience did not miss the translation as they were able to interpret the meanings from the characters’ emotions. But an emotional and long monologue of the father is completely in Urdu, which I understood completely. But I could not decide if the audience was able to emotionally translate it or not.

The play has a broad appeal to the multi-cultural audience of New York which was clearly very interested in the drama. The very engaging play is well performed and has generally been well-received by audiences and critics alike.