Should PSL only be held in Pakistan? 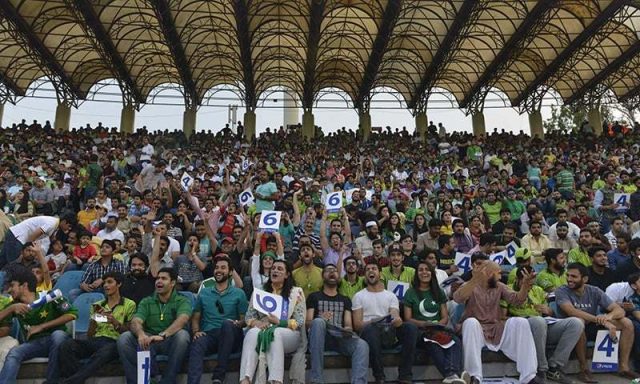 We have seen pretty dark times as a nation and while we were still facing those bad times, our biggest mean of entertainment was snatched from us. For years, we longed to see International cricket back in Pakistan. Even our team’s home series were being played in the UAE.

The introduction of Pakistan Super League (PSL) has provided the country with a cricket recipe we had long been craving for. Although the first season was not held in Pakistan, the second’s final was played in Pakistan to an overwhelming response from the people as fans arrived from all over the country in Lahore to attend the final of the second edition of PSL.

Why all PSL matches should be held in Pakistan

PSL might be changing individual lives but it is definitely changing the collective thought of our society. The tournament has brought immense happiness in the lives of cricket fans (which basically includes all Pakistanis). PSL has made us look positively towards the future and have hope for tomorrow as we never had before.

Qaddafi Stadium’s electrifying atmosphere on the day of the final will never be forgotten by those in attendance. The cricket fans in Pakistan had waited so long for that moment and they were not going to let it pass away without living it to the fullest. Two out of three PSL matches set for Pakistan have already been held and a final in Karachi will take place today, but PCB should try to bring the whole tournament to the country.

In Dubai and Sharjah, the teams played many matches in an almost empty stadium. For a couple of reasons the matches couldn’t attract the crowd but as soon as the tournament moved to Pakistan, tickets got sold out faster than anyone can imagine. That’s why all the matches should be held in Pakistan where this cricket-starved nation can have its much needed entertainment.

How PSL is promoting new talent

PSL has proved itself as a talent hunt tournament for young Pakistani cricketers. Since the first edition of PSL, we have found gems like Shadab Khan, Hussain Talat, Rumman Raees, Ibtisam Sheikh, Fakhar Zaman, Hassan Ali and Umaid Asif. One can be sure that PSL will continue to provide the young cricketers of Pakistan a chance to showcase their talent.

After last year’s final it was announced that three matches from the third edition will be held in Pakistan. Two of those matches have been successfully played in Lahore already. It has only been possible thanks to the tiring efforts of our provincial governments and security services. Cricket fans of the country are grateful to them for bringing cricket home.

Darren Sammy is the head of our PSL family

What can be said about Darren Sammy? He came, he played, and he conquered our hearts. We fell in love with Darren Sammy when he came here last year to play the final and did not make us feel like he was a foreign player but rather one of our own.

The crowd root for him more than they root for Pakistani players. The banners they hold for him at the matches are filled with messages of gratitude and love. Is he the next Lala for the Pakistani people? Or maybe even better. People are requesting the government to award Darren Sammy an honorary citizenship after he thanked foreign players on Twitter for visiting Pakistan.

Thanks for making the trip bro 1 more to go.. Karachi here we come

A shout-out should also go to Javed Afridi and Fawad Rana for the way they remain involved in their teams’ matters around the year by organising talent hunts. And when the tournament arrives they have as much fun, if not more, as the players and the crowd. They also make our PSL experience ten times better.

Speaking of the PSL experience, the most important part of it is the PSL Twitter. That’s where all the banter happens.

Whether it’s the Lahoris,Karachiites or Islamabadi trolling each other or simply expressing their excitement over each wicket or boundary, No matter how boring (we haven’t seen tho) the match is these fans on twitter have declared LahoreQalandarsvs Karachi kings the ‘Mother of all matches’, you can find it all at PSL Twitter:

Lahore Qalandars have now lost 8 matches in a row, the last time Qalandars won a match Misbah & Younis were still part of the test team, Sarfaraz had never captained the ODI team, Shadab, Fakhar, Faheem had not even played international cricket & Nawaz Sharif was still PM.

If they dig further, might end up finding Lahore's ranking in PSL. https://t.co/lEzpxow7cP

The tensions between Pakistan and Indian have lasted for far too long. But the politicians still haven’t found a way for peace. We should try and bring Indian cricketers to play in PSL. That will not only bring more talent to our league but also harbour peace between the two countries. And maybe this will also pave the way for future Indo-Pak cricket series. PSL is loved in India so we know that Indians want the same thing. According to the statistics published on the official PSL website, Indians were the top live streamers of the final match of PSL 2.

The third edition of PSL is ending today. But the joy it brought us isn’t. We have made this league successful by attending the matches, rooting for our teams on the social media, wearing our team’s colors, and now it is time to make a resolution that we will continue to do so. Because it is our league and the responsibility to make it successful lies on us as much as it does on the organisers.

Today, Pakistanis aren’t concerned about the two teams playing the final. The question of who will win the trophy isn’t bothering them. They are happy because Cricket has won, Pakistan has won.