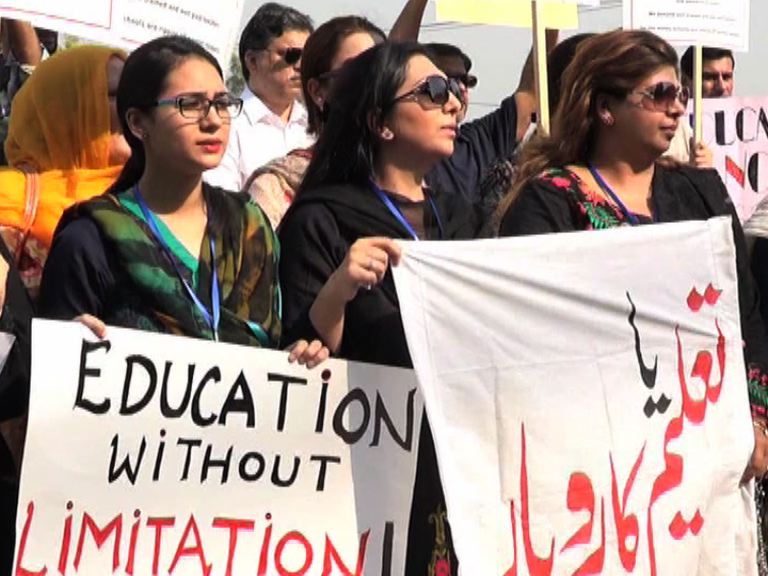 The biggest curse the country has been facing for the last two decades is commercialization of education as 98 percent of private educational institutions are just minting money.

One of the prime reasons that drift the students to private business oriented institutes is the degrading quality of the existing government or the aid institutions. The privatization of the education is on the rise because of the lack of the alternatives. The government is supposed to raise the standard of the education and the proper infrastructure must be developed.

One does not have to reiterate the need for civilized and quality education to children in the 21st century. The importance of education is so well ingrained in Pakistani society that we have a whole section of deity dedicated to that field. With an increase in the number of schools and the number of school going children, it seems as if one percent rise in school enrollment is celebrated as huge success. There is, however, no guarantee that our children are receiving the best and the quality education. Whether we are talking of schools or colleges, private or public, education is up for sale for a price so high that parents save money only for their children’s education. On one hand, we should be proud to live in a culture where parents dedicate so much money to make sure their children can compete with others and be successful. On the other hand, it would be great if they could spend half the money and twice as much time to check the quality of education that their children get.

There is, currently, a decline in the quality of education in private institutions and enrollment in public institutions. The private school mafia that is presently operating in major cities of Pakistan is primarily responsible for the hopeless education that our children receive. This is not simply a case of quality going down because of an increase in the number of schools. This is a case of lack of funding of public schools by governments, lack of rules and regulations in place for a private educational institution, prevalence of corruption among officials who are supposed to enforce the laws in place, and most importantly, parents falling for false advertising done by private schools.

We should learn lessons from other major world powers on how to handle our education sector based on our population and capital. In a preferred scenario, governments exclusively concentrate on funding public schools by making sure that children who come from all economic backgrounds get the same quality of education. This means giving good quality education to all children so that their parents’ economic situation does not have a negative impact on their children’s future. This guarantees a fair competition between all pupils. If a parent loses job for a short period, their child’s school enrollment should not be affected. As our primary, secondary, and high school education takes at most 16 years, in the meantime, parents can save enough for their children’s higher education (university and beyond). This is how a decent society, a society with its priorities in the right place, behaves. Taking the case of the United States, when one sees the list of best school districts in any state, that the best school districts also see a rise in property rates. If you improve your school district, many people would want to move there (as there is free enrollment they would love to). However, the situation in Pakistan is very different. If you have a shopping mall or a highway or a movie theater or a busy market close by, you will see an increase in the property price. A good school nearby is not a priority. So, let’s not be surprised with the quality of education, when the priorities themselves are not set right.

Due to the lack of basic facilities, parents from lower and middle class backgrounds do not wish to send their children to government schools. Only the poorest of the poor, who cannot, under any circumstances, afford to send their children to corporate schools, send them to government schools. Lack of basic facilities in public schools is not a new phenomenon. Majority of the people born in the 1960s and 70s can endorse this. Even though they have spent days with no electricity, they give gold standard to the quality of education they had received. They say that there was great interest among teachers to make sure that their children learned. You do not see the same with private schools.

The parents are delighted to hear their children speak a few sentences in English, I hope they realize the permanent impact they will have in future where the language would not help them communicate well because he would lack that experience of public speaking. Your child will not be able to work as a part of a team in real world because he does not know what it means to play with a team.

The large middle class population that does not want to send their children to government schools is the group that is suffering the most. As English medium education has become mandatory if you wish to compete in the modern world, there is a lot of desire among parents to see their children attend schools that help them excel in English.

The parents are delighted to hear their children speak a few sentences in English, I hope they realize the permanent impact they will have in future where the language would not help them communicate well because he would lack that experience of public speaking. Your child will not be able to work as a part of a team in real world because he does not know what it means to play with a team.

In Pakistan, schools don’t actually perform the duty of a learning center rather they are in business to make profits by charging hefty amounts as monthly dues. There are institutes that charge 30,000 plus only as tuition dues, adding up the costs for uniform, books, events, security and other such things increases the charges up to 50,000 per month. Parents, who are willing to go to every extent for giving the best education to their kids, often run out of the budget in an attempt to pay the dues of school.

All the schools are teaching the same courses but with a price difference. Education has undoubtedly emerged as a business where two companies are offering the same product but in different pricing only because the standard of quality doesn’t match.

Let us hope that there will be few parents who slowly realize the trap they have walked into with corporate education. For personal experience, majority of Pakistani parents prefer sending their children to private institutions solely because they do not have any other option. Unless we demand the government to take care of public schools, put a hold on these private prison cells disguised as educational institutions, have strict rules and criteria for the functioning of a private school, ban the demand of donations, there will be no standardized school system in Pakistan. These private school mafias will engulf all public schools leaving them in ruins.

Making decisions about a child’s education requires specialist knowledge of what children need. Teachers are trained to understand the needs of children and they have the skill-set required to meet those needs. Education is not a service industry and students are not clients. Education is a system that provides students with knowledge and the ability to comprehend that knowledge. It is time to halt the decline of education. Teachers need to reclaim their status as education professionals.

The fact is that neither a carpenter wants his son to become a carpenter, nor does a nurse want her daughter to be humiliated just like her in this aggressive society. A rickshaw driver does not want his boy to inherit his rickshaw and the short-cuts he knows to take passengers to their destinies. Not a single mechanic wants his son’s hands be blackened by the grease and oil. They all want better than this, regardless of where fate would take their children at the end.