It is the need of the time to abolish the superfluous divide between gender, caste and creed and most importantly between the government and the people

Media, due to its intensified impact and power, now is the fourth pillar along with the legislature, executive and judiciary, of the state. The new era of advanced technology leaves media highly responsible for providing well-investigated news, as held a reliable source of information and education. With mounting radicalisation and terrorism in Pakistan and beyond, media along with military and government can effectively indoctrinate de-radicalisation among masses.

The famous ‘CNN effect’ explains the significance of media’s influence on state’s policies particularly in conflict prevention and egalitarian interventions. Colin Powell says, “Live television coverage doesn’t change the policy, but it does create the environment in which the policy is made”, therefore, media can play a pivotal role in the process of de-radicalisation via broadcasting positive notion as news build the perception of the viewers.

Noam Chomsky says, “Americans have split the world between ‘them’ and ‘us’, once ‘they’ were communists, these days ‘they’ are Islamic fundamentalists”, a radical activity by an American is strategically termed as the mass shooting, gang violence, a lone shooter etc. but any radical activity by a Muslim is simply termed as terrorist activity. Due to this narrative, not only indigenous American Muslims but Muslims throughout the world are facing racism, hatred and even violence. Now, it is media’s responsibility to develop a counter-narrative that terrorism has no faith, religion or boundaries, tagging it with religion can only worsen the situation by making war on terror inevitable. 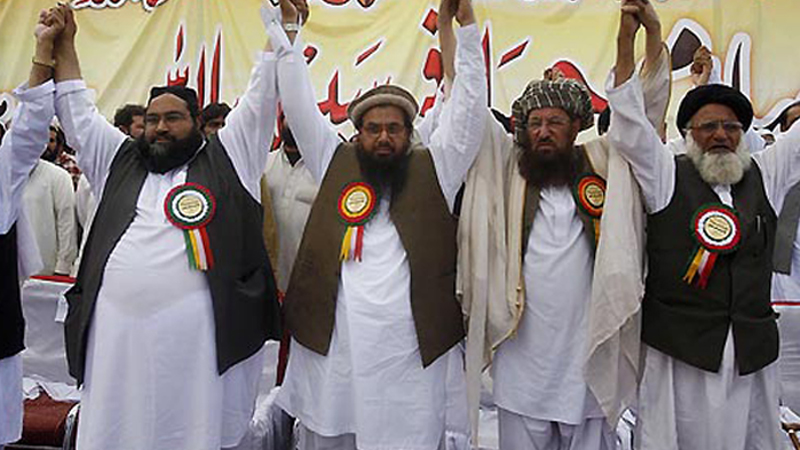 Media Journalism is the foundation for political awareness, being truthful to their profession journalist could hold public servants accountable for their actions compelling them to remain honest with their authorities. But nothing is worse than politicised Journalism as Edward Bulwer-Lytton said: “The pen is mightier than the sword. Sometimes ignorance proves as the best policy to discourage radical activity at the very beginning, for instance, the protest like TLYR, as there are proper ways and designated places to record protest and media via coverage actually sponsor such activities.

Awaiting the ripe moment to broadcast news is pivotal, as we have seen the chaotic situation created due to the live coverage of Lal Masjid issue, and almost every news channel was broadcasting the uncooked news created disorientation and misperception about the situation.

Similarly, Swat insurgency started with a radio program that radicalised the common citizen of Swat, this shows how impactful is media in radicalising and conversely de-radicalising masses. Therefore, State’s established media protocol need enforcement, particularly, constant monitoring of mass media activities and prohibition of live media coverage from the crime scene to avoid unnecessary perplexity, for the sake of security at domestic level.

Media is “Mirror of society” as it defines the cultural and normative dynamics, this medium leaves an influential impact on the intellect of viewers to think and rethink about the issues being showcased and society eventually reflects on them. We can see the trends of our entertainment/morning shows; we have wholeheartedly endorsed Hindu customs while living together for decades and now confusing customs with culture.

As Stephen M Croucher in article Religion, Culture, and Communication explains, religion is the essential layer of culture, and Pakistan’s media devotedly reflect on religion just in the month of Ramadan, whereas, true teachings of Islam needs to be observed throughout the year in order to discourage the culture of violence. As media plays a vital role in defining societal norms, therefore, entertainment media should display morally and ethically correct notion that inculcate moderation, respect, discipline, tolerance and discourage extremism, bigotry, racism, and impatience.

To induce respectful values in society, it is crucial to discourage women’s characterisation and objectification in mass media also young girls should treat like children, not as a source of amusement. Online shaming and cybercrime is another form of violence that require attention, Nighat Dad’s Digital Rights Foundation is working for digital rights and freedom of expression, however, awareness about cyber rights and responsibilities at State level is vital to make technology safer.

Albert Einstein said: “The difference between stupidity and genius is that genius has its limits.”

I believe it’s about time that media seriously follow the state’s established protocol, bills, and preventive measures, as National Action Plan (NAP) emphasised on the positive role of media and literature in promoting enlightened approach. However, only media can make media answerable, broadcast the ramification of sharing ill-facts, fake news, and the tailor-made information is essential for the awareness of the Soft Power media possesses and the magnitude of its mistakes being a source unintentional radicalisation. Pakistan is culturally diverse and territorially mesmerising place that needs projection, we need to establish our own identity by rejecting the lead of foreign media.

It is true that freedom of speech is the backbone of democracy, thus, President of Pakistan urges that media should highlight government initiatives and developmental projects to proliferate hope and optimism among masses. It is undeniable that media is a massive and rapid source of education as it spreads to the length and breadth of the state mostly in form of television, radio, newspaper and magazines.

Masses tend to rely on media documentaries and movies, thus leaving media highly responsible for conveying well-researched and unbiased dimensions of the subject.Therefore, having such an access and influence, media can promote tolerance, acceptance and all-inclusive approach for peaceful societies. Also, it is need of time to abolish superfluous divide between gender, caste and creed and most importantly between Government and the nation. Pakistan is full of talent just a little push to the right path can bring progressive changes and media through constructive criticism, critical thinking and people-centric approach can ensure such a change.

The writer is Intern at Islamabad Policy Research Institute (IPRI)