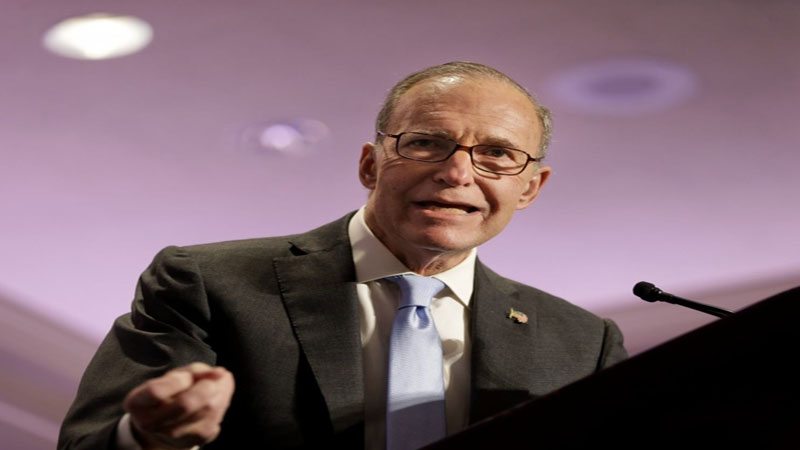 My old friend and longtime CNBC colleague Larry Kudlow is taking the helm of President Trump’s National Economic Council (it’s a political appointment; no congressional approval required). A few folks have asked me for my take on the appointment, so here it is.

First, however, let me point out that while we’ve been on opposing sides of many – not all, as you’ll see below – debates over the past 20-plus years that I’ve been arguing with Larry, we’re good colleagues and friends. In these divisive days, I think that says something fundamentally positive about him.

For those not in this loop, the NEC is basically command central for the administration’s economic policy. It sits atop and runs the White House economic policy process. The sway of the council and its leader varies with presidents and personalities. Kudlow’s predecessor, Gary Cohn, appeared to have some real heft in policy negotiations, at least until he didn’t (the tariffs), at which point, he left. Knowing Kudlow, he’ll be a powerful NEC chief who will have the president’s ear. Though, of course, Trump himself is always a wild card in every aspect of the presidency.

Kudlow is a die-hard, supply-side, trickle-down tax cutter. In fact, he played a behind-the-scenes role in crafting the Republican tax plan, which was, broadly speaking, much in his image. For as long as I’ve known him, we’ve had pretty much the same argument about the folly of this approach. I’d say he’s impervious to the clear, strong evidence that tax cuts come nowhere close to paying for themselves and that growth estimates from the recent tax plan that he and others have touted are wildly optimistic.

Simply put, anyone who’s ever heard Kudlow knows that like most adherents of this discredited school of Laffer-esque tax policy, he hugely overestimates the supply-side benefits – more labor supply, capital investment and productivity growth – of tax cuts. But what you may not know is that he’s better than that on some other important policy areas, and, at least from my personal experience, outside of tax policy, he listens to opposing viewpoints. Moreover, because the big tax cut is already legislated, perhaps he’ll have a more positive influence on some of these other policy areas.

This is a huge issue right now, and one Kudlow tends to be quite good on, by which I mean he recognizes the key, simple realities of the pressing questions in this area. Kudlow agrees that economists do not know the “natural rate” of unemployment, and in very recent discussions, he questioned – correctly, in my view – why, if the economy is supposedly at the brink of overheating, there’s so little wage and price pressure? He’s been mildly critical of the Federal Reserve for raising interest rates in the absence of a clear, data-driven rationale.

That said, as NEC chief, as opposed to TV commentator, he’ll have little space to say much about Fed issues, at least in public. Though the Trump administration doesn’t always follow this protocol, even they don’t say much about Fed policy. But internally, I suspect Kudlow will be a voice in support of pushing for full employment, which is, not incidentally, consistently with presidential preferences for running hot economies.

Another misguided concept of which I’ve been unable to disabuse Kudlow is his willing subjugation to his ruler, King Dollar. It’s always curious to hear these alleged free-market types assert that when it comes to the dollar, they’re not so comfortable with markets setting the exchange rate. They want a strong dollar, dammit, and that’s it. That doesn’t make economic sense, especially as a declining dollar can be an important, export-supporting adjustment in weak economies. But I’ve always thought Kudlow’s motivation here is that he believes the strong dollar boosts dollar-based assets, and the man loves little more than a rising stock market.

I’ve tried, with slight success, to get Kudlow to recognize that a rising stock market doesn’t do much for the middle class and poor. This was the substance of our last on-air argument, in fact, when he was trying to convince me that all those share buybacks generated by the tax plan – which, for the record, I warned him about – would help working-class people through their retirement accounts. But the best work on this question, by economist Ed Wolff, shows that even including retirement account holdings, the bottom half of households own almost no stock at all. Conversely, 84 percent of the value of the market is held by the richest 10 percent of households.

Kudlow is no deficit hawk. At least in conversions we’ve had, he’s been where I am: Over the long term, your outlays should move toward your revenues when the economy is closing in on full employment, which, for the record, is the opposite of this administration’s fiscal policy. But I don’t recall him ever buying into the “crowd-out” (public borrowing must be avoided because it crowds out private borrowing and forces up interest rates) or austerity (reduce the deficit in weak economies) camps.

Where we differ on this comes back to tax policy. Like his new colleague, Treasury Secretary Steven Mnuchin, Kudlow is convinced, against all evidence, that the bigger the tax cut, the bigger the growth-inducing impact on revenue. Not true, and not good in a highly positioned official.

I noted his weird dollar fetish above, but that aside, Kudlow is a big advocate of globalization. He hated Trump’s tariffs, though he eventually said something positive about sanctions on China for dumping steel. But any such conversions are new for Kudlow. In our arguments, I’ve long been the one to underscore justifications for targeted duties on trade partners who dump products or manage their currencies to get a trade edge on us. I suspect he’s trying to find his way vis-a-vis Trump in this space. Good luck with that.

At the end of the day, and especially given his trickle-down fantasies, it’s hard to imagine that Kudlow’s National Economic Council will alter the fundamental economic flaw of the Trump administration: the fact that they’ve consistently betrayed the working-class people who helped put them in the White House.