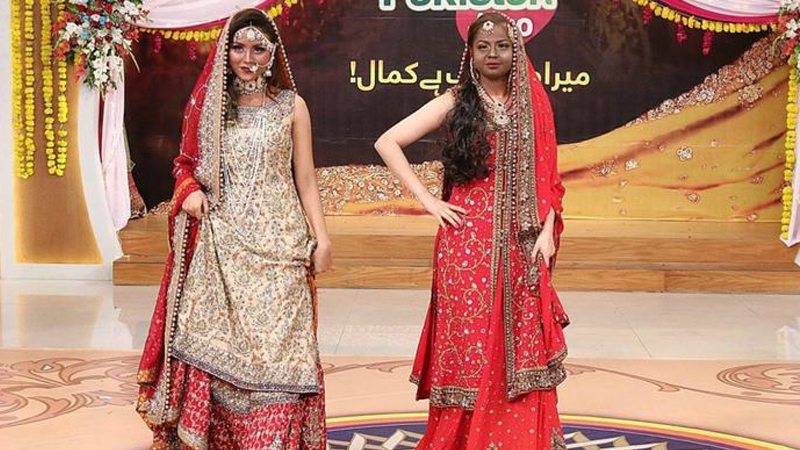 Morning shows in Pakistan tend to stir up some controversy to spice up their ratings every now and then. However, most times the backlash doesn’t settle into the equation for too long, and sooner than later, people tend to forget about all the meaningless drama.

Recently, talk show host Sanam Jung, who hosts the show Jago Pakistan Jago aired on Hum TV, has come under the radar for mocking dark skin and sending yet another racist message being propagated to Pakistani audiences. As if Sana Safinaz’s recently alleged ‘racist’ campaign did not relegate to enough of a disaster in its depiction of ignorance and casual attitude towards serious concerns in our society, the curious case of ‘blackface’ is just what we needed next to ramp up the offensive.

In the segment of the show that went with the name ‘Mera Makeup Hai Kamal,’ participants in the competition were assigned to the much ‘challenging’ task of giving dark-skinned women a bridal makeover, implying the very underlined fact that dark-skinned women can make beautiful brides too, contrary to the gori bahu notion of every scrambling mother-in-law who’s lethal ambition is to develop a fixation with ‘whiteness’ and ‘fair and lovely’ tampered skin in and around their homes.

The models that were given makeovers were not dusky or dark-toned; they were fair-skinned, artificially made to appear darker in stark contrast to their original colour, as the participants had to paint their brides’ faces using the ‘Negro’ shade of Kryolan TV paint stick foundation. This was then followed by a series of unnecessary obstacles and racial slurs by the host and mentors, where the participants’ performance was purposefully handicapped by the condition that they could only use one hand to do the make-up along with being assigned insufficient time to do their jobs. Also, terms like ‘habshi’, ‘habshan’, ‘makrani’ and ‘negro’ were reiterated an adequate and casual amount of times throughout the span of the episode, belittling Pakistani ethnicities like Makrani and Sheedi.

The end result was indeed as evident of a mess as is portrayed in the stills from the show, with arms of both the models visibly light in colour in obvious comparison to their faces.

More backward aspects of the show presented examples such as a solicitous mentor, Amber, saying: “I’ve done the makeover of so many brides, but I’ve never had such a bride, like a ‘Habshan’, ever. But you are being presented with this challenge.”

The participants were also restricted from lightening the dark skin of brides in any fathomable way possible, so much so that they were even instructed to refrain from colour correcting their brides’ undereye circles.

Resultantly, the episode was lambasted on social media for its shameful and disgraceful attempt at spreading a ‘positive’ message.

As a South Asian country, and in all honesty, was it that difficult to find young women of darker skin tones to celebrate the positive message of the segment? By the end of the show, makers of the program not only seemed to support the bias against dark skin by showing off the successful makeup expertise of the artistes but happened to mock it even more. It’s interesting to note here that while the team of the show has not released any statement regarding the disconcerting issue, pictures and stills from the show have been deleted from the official page of Jago Pakistan Jago.