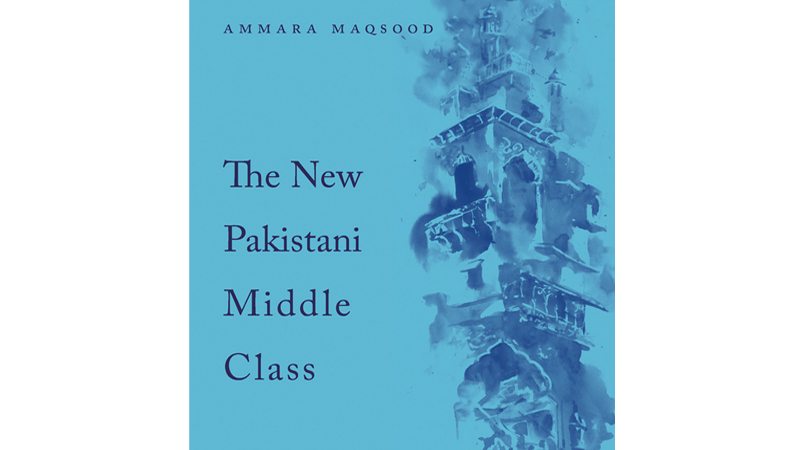 Published by the Harvard University Press in 2017, The New Pakistani Middle Class is a book by Ammar Maqsood. She skillfully unveils ‘new’ modernity from the ‘lost’ modernity of Lahore, the cultural capital of Pakistan.

The author writes about the formation of the new middle class in Lahore while differentiating it from the old middle classes who have nostalgia of a modern Pakistan of the 1950s, 1960s, and party 1970s (mostly referring to the era of General Ayub Khan). The established old middle class is well-versed in UP-Urdu style speaking, poetry lovers, and have familiarity with urban life. Most of them are government officials, politicians, doctors, and teachers who started careers in the 1950s and 1960s. This class usually faults the Islamisation agenda of General Zia-Ul-Haq and the subsequent emergence of Wahhabism for enervating the modernity which was characteristic and endemic to Lahore. Wahhabism includes various school of thoughts influenced by Saudi Arabia and Gulf states such as Jamat-e-Islami, Deobandi, Jamiat-Ulema-Islam, Tablighi-Jamaat and Dawat-e-Islami, which is blamed by the old middle class as a threat to more syncretic and secular-oriented Sufi forms of Islam. This version of Islam is believed to be a more tolerant moderate sect.

The new middle class is mostly the second generation of rural Pakistani immigrants from rural Punjab. They are making financial leaps and their self-representation is influenced by ‘imagined’ outsiders (old-money class in Pakistan, and mainstream American society or an abstracted West). Piety (religion affiliation) has been shaping the new middle class, and this is usually borrowed from abroad (mostly West) so that they may not be labelled as being ‘backward’. The cultural intimacy from the West is a reflection of the identity issue of being ‘global’ Muslim especially after 9/11 to show that ‘global’ Islam is modern and inculcate new aspects of life. However, at the same time, they represent themselves through piety from Pakistani elite and old middle classes of Lahore.

The new middle class is mostly the second generation of rural Pakistani immigrants from rural Punjab. They are making financial leaps and their self-representation is influenced by ‘imagined’ outsiders (old-money class in Pakistan, and mainstream American society or an abstracted West)

The analysis of book is at the result of conducting a comprehensive longitudinal field work with female representatives of the new middle class who used to attend Dars classes at Al-Huda, an Islamic teaching institution run by Dr Farhat Hashmi. Females at this teaching institutes are apolitical and wish to learn ‘Asl Islam’ with the component of ‘identity crisis’ of being Muslim especially the image of Muslim in the West. The inspiration of self-learning of Quran is from friends and relatives living abroad to know about ‘global Islam’. Their way of learning global ‘generic’ Islam is relatively scientific and rational, though limited, without affiliation with a particular school of thought (Tafliq or Ghair-Muqalad). In addition, the class struggle is also one reason to attend such gatherings where new middle class differentiate themselves on the basis of piety from ‘liberal’ elite class. This elite class perceives the new middle class as ‘backward’. One of the key reasons is that this class borrows norms from Muslims living in the West in fashioning their own version of the Pakistani modern.

This new middle class has be susceptible to influences of religious consumerism and Christmasisation of Ramzan. Muslims in Pakistan are increasingly consuming goods and services which are consumed by Muslims in foreign countries, especially those in the West to show off their connection to the outside world. Religion and the market economy combine on daily basis to construct a modern Muslim lifestyle. So Muslim consumerism is due to Islamic identity crises, individual taste and neo-liberalism.

The author gives a depiction of the new middle class in comprehensive 150 pages book. Although a fantastic book, one important limitation is that the author’s fieldwork is conducted mainly with female subjects. If the author could incorporate perspectives from male interviewees, it might have impacted the overall analysis presented. At the least, it might have led to a more detailed and complete picture of the new middle class that is emerging in Pakistan.

The writer is PhD and based in the US for Fulbright Post-Doctoral fellowship. Contact via: naimatims@yahoo.com