There has been a systematic negligence towards the province 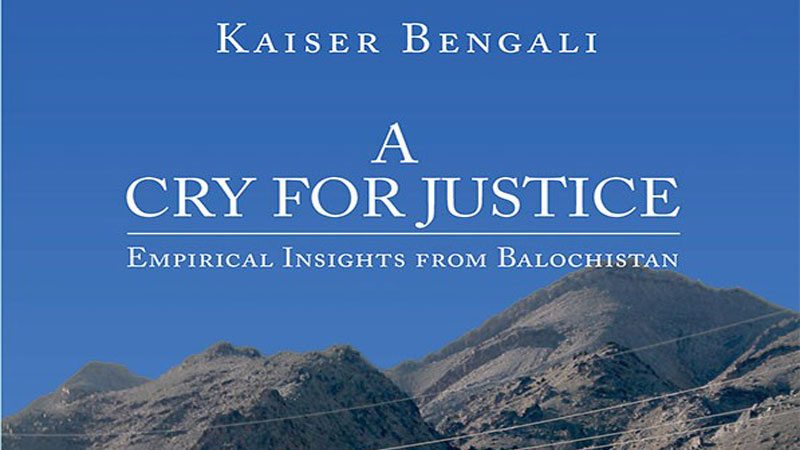 A new book is out on Balochistan. It has been written by Kaiser Bengali, titled A Cry for Justice: Empirical Insights from Balochistan. The book painstakingly sheds extensive lights on some five core aspects of under-development and deprivation in Balochistan including gas, development funding, civil services issues, federal social protection and structure of electoral representation of Balochistan. Unlike many others books, so far written on the issue of Balochistan, this book perhaps appears unmatched and unduly has set example of its own, which gave a vivid explanation of every dreadful saga that afflicted in the resource-rich and poverty-hit province for decades or so.

Dr Kaiser Bengali dared to sketch out long lasting issues more in details with a proper course of facts and figures. While reading his book, it seems he has incisively assessed the core problems of the province, and precisely elicited every genuine facts and data from officially acceptable sources.

Dr Bengali’s observations state that Balochistan is being discriminated against in systematic way on a large scale resources are being taken from the province and used in other provinces.

It can at best be enough to make sure, every unaddressed issues from one to the next about Balochistan, will vitally deserve sheer attention and call for an utter recognition to a quick resolve.

Awful to see that Balochistan despite being in this 21st Century still gives a medieval outlook to every basic human needs; be it health, education or any other human development sectors. Not only does the province lag behind, but has also become a victim to backwardness.

It is estimated that around 80 per cent of people in Balochistan abjectly live below the poverty line. In some remote areas of Balochistan, even today the people are forced to live in simple huts with dirt floors, without access to electricity. They have to use century-old styles of using lantern lights to spend nights and quell darkness. They pathetically stumble merely on bread and butter, and sometimes hardly manage to get meals for twice or thrice a day. Mostly the parents from unprivileged class cannot earn enough money to send their kids to good schools.

It is estimated that around 80 per cent of people in Balochistan abjectly live below the poverty line. In some remote areas of the province, even today the people are forced to live in simple huts with dirt floors without access to electricity

The health issues pose the toughest challenge to ordinary folks and will continue as long as they stand unresolved. Particularly in rural area of Balochistan, several such cases are reported that patients die even of minor diseases due to absence of hospitals and medical treatment. People have to travel to Karachi or other cities in Pakistan to get treatment for even minor health issues. More surprisingly, the level of health facilities can be judged from certain examples. A few months ago, a picture went viral on social media in which three people belonging to a far-flung and mountain area of Balochistan, were seen holding a patient on their shoulders and carrying him through a century-old wooden-built stretcher. It took them miles of travel by foot to reach a doctor in the suburb areas. Now, let’s imagine how could it be unbearable scene to watch that these people routinely go through such ordeals because of the utterly dearth of health facilities in Balocistan. The woes and miseries of the downtrodden people of Balochistan still look as it looked during some one hundred years ago.

It won’t be wrong to say that there has long been a systematic negligence towards Balochistan. The people were denied their rights to every basic human needs. And last but not the least, the voice of people for genuine rights were either trailed off or left unheard by the rulers.

As Kaiser Bengali in his new book writes that there is a colonial pattern of control in Balochistan which has resulted in the largest province of Pakistan not only lagged behind, but falling further behind. The book, for all manners, reveals a gospel truth about Balochistan. It says, the ‘long’ years of neglect and exploitation, the province has seen a malicious saga of resources transfer on a massive scale, and a saga of colonial style political and economic management.

Kaiser Bengali, precisely expressed irrefutable facts in his book. As he said, gas was discovered in 1952 in Sui, and from 1955 it was supplied in pipelines and provided clean and safe fuel to millions of homes and powered industrial development in other provinces. Yet, Balochistan remained bereft of any gas for almost three decades since the discovery of Sui gas. It was first supplied with gas in 1984. Ironically, apart from Quetta city, while in rest of Balochistan, the gas is not provided to the locals even today. If money is any indicator of injustices, Balochistan has been deprived of RS 7.69 trillion just for gas which benefited other provinces at the cost of Balochistan. And, according to Quesco’s figures, Balochistan provides 2,280 MW to the national grid while its share is only 700-800 MW.

According to the book the historical neglect is also indicated by absence of road communication in the province. However, the major parts of the province still lack concrete roads.

Even in the bureaucracy a similar trend is seen. Dr Kaiser also quoted statics about representation of the Baloch in federal bureaucracy, and said that 11 key offices are there in federal government, and there hardly can be upper grade officers from Balochistan till today. None of the chief secretaries appointed in the province were from Balochistan. Furthermore, the province is meagerly represented in the federal civil services.

While in representation the presence of Balochistan in the corridors of power is scant at best, in line with its population share, Balochistan has 17 members in the 342 member National Assembly, this tends to drown out its voice and effectiveness.

On the other hand, one can also elicit a popular analysis from the political prospect in Balochistan that almost more than a four decades of history of Balochistan Assembly, whilst it never worked freely. More often it is merely proven rubber stamps. Those so-called leaders if know the art of a puppet role are easily accommodated in the house. The loyalists are set to the power in overnight. Then, these representatives were mostly made to involve in loot & plunder, they give precedence to vested interests over the public ones. There is a lot of interference in the province and it is alleged that the key decisions are seldom made by the provincial leadership.

Ironically, one of the most important and faulty myths prevailed everywhere in and outside the province which holds local Sardars responsible for the deprivation of the people in Balochistan. A hype created that iron rules of Sardars had hampered the development process in Balochistan. The Sardars are branded as tyrant rulers who only intent on making their people serfs and slaves. While the reality is completely the opposite, it seems like mere a propaganda to place a blame on Sardars while to unveil the actual factors behind the wretched fate of Balocistan. The fact of the matter is that less than a third of Balochistan is under Sardari system. And a large number of the Sardars is in fact, working with the corrupt political system and toe the lines to the hidden powers. However, let’s take an example of Makran division which runs under no Sardari system but the people face similar miseries as it faced in some other parts of the province.

Balochistan can be put on path to progress through generating employment opportunities, giving the people rights to education, health and other human development fields. All it needs the people of Balochistan should be acknowledged of their political, democratic and constitutional rights to prosperity and national workforce.

Instead of pushing fake and bogus leadership to power, the system should allow the genuine leadership to work freely and represent their people in the province. For all reasons, to Balochistan, now it extremely yearns for ending the period of darkness and usher in season of light and hope.

The writer is freelance columnist, takes interests in history, politics and literature, can be reached at masoodhameed916@gmail.com