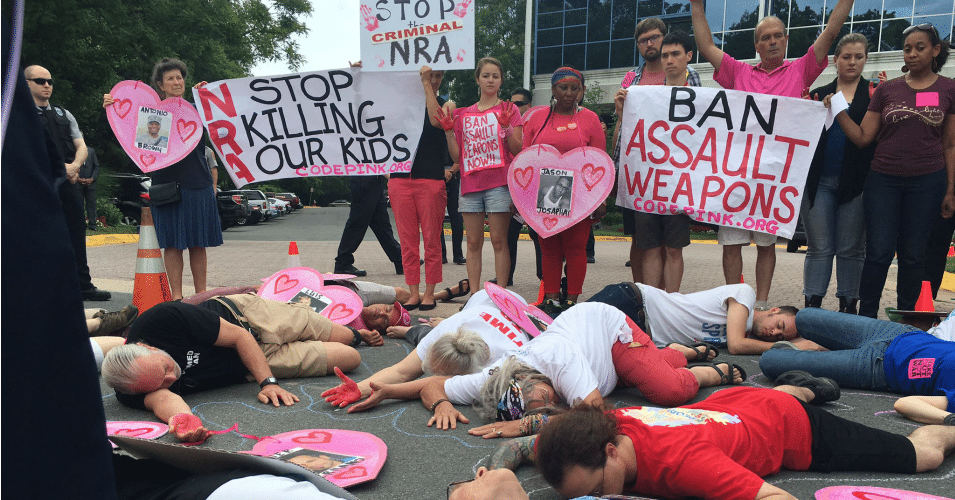 In the US, as everywhere else, kids take a back seat to what goes on in politics and policymaking. However, what’s going on right now across large parts of the US has never happened before. Young people who have seen massacre after massacre of their peers want to channel their grief and anger into something meaningful.

Yes, these are the bright, articulate young people who want to advocate for gun control measures to protect schools and students in the wake of the tragic events at Marjory Stoneman Douglas High School in Parkland, Florida.

I have never seen such a thing before, where young kids are fueling the movement, standing up for their right to be safe, and marching and organizing for justice. Kids are raising their voice in concerted protest: “the NRA has got to go”, “not one more”, “enough is enough”, or “you’re either with us or against us”. They are reacting because they think that the adults who have the responsibility to take care of these things have failed and it’s their generation’s responsibility. As one of the students said, “we definitely have a moral obligation to do something, considering that so many innocent people that we know have been killed”.

For once, I’m hoping to witness a change. Maybe these protests can bring some action from Congress to do the right thing such as passing common-sense gun laws. Yet it is not at all clear whether any gun control measures will be implemented anytime soon.

It makes me sad to see that these protests have generated a reaction from conservative groups with the grieving students being portrayed as pawns and conspiracists. This is a common phenomenon the world over. I remember a similar situation in Pakistan where I saw this with Malala in the recent past. When she stood up for education against the Taliban and survived a bullet shot, she was accused by some of her countrymen of being a performer planted by the West with all kinds of conspiracy theories attributed to her. Similarly, in the US, right-wing extremist groups are targeting students who have called for stronger gun control measures. They are the subject of conspiracy theories that have spread far and wide, reaching cable news and social media. The assertion that the students are paid “crisis actors” has gained the most velocity online, trending on YouTube and, at one point, racking up tens of thousands of shares on Facebook. Alternatively, they are called FBI implants, purportedly defending the bureau for its failure to apprehend the Florida shooter before the event. They have even been portrayed as puppets being coached and manipulated by the Democratic Party.

I find this whole situation bizarre. Why are some extremist groups unnecessarily targeting victims of these tragedies? They’re protesting because their generation has little faith in institutions which have failed to provide basic security and accountability. They are the school shooting victim generation. That is why they are coordinating school walkouts, social media awareness movements, peaceful protests, and a call for solidarity. They or their peers have buried their own best friends, and they see how commonplace these murders have become, and they know that politicians have nothing to offer but their “thoughts” and “prayers” while doing nothing.

In the big picture, I can understand that the Second Amendment is unimpeachable. It guarantees the right of citizens to defend themselves but Republicans can make a few changes and implement some common-sense safety measures.

But unfortunately, they have no intention to do so. That reflects their lack of political will. Can I tell you why? The fact is that Republicans control both houses of Congress and most state legislatures. To get anything passed, it would be necessary for Republicans to deviate from some of the absolutist NRA positions. This will require taking out money from politics, have publicly funded elections, and make sure special interests like the NRA no longer have a chokehold on gun policy in Congress. I believe that the NRA is not about people defending themselves, it’s about selling guns. The more the better, with citizenry as collateral damage.

It saddens me that a progressive country like the US is so out of touch with sane reasoning regarding the ownership of firearms. There are more than 1.5 million Americans who have died as result of guns in the last 49 years, according to the US Center for Disease Control and Prevention.

It is a scary environment where I and many parents like me are concerned for our children’s safety. We are not happy when Republicans preach hardening schools and arming teachers etc. For me it’s an absurd and dangerous idea. Has anyone considered or studied the impact on children going to schools protected by guns and security guards? When I talk to many parents, they simply reject these ideas. They do not think it is healthy for children. On the contrary they think it is a bad choice to expose children to weaponry and instill a culture of fear in schools. What about the scary possibility that a teacher ends up using a firearm in the classroom unintentionally while disciplining the kids? For me teachers are not the kind of people from whom we can expect or demand this kind of expertise. Highly trained police officers frequently miss their targets, even at close range, in the heat of the moment. Having armed civilians at a shooting scene would just make the police’s job even harder. We need to understand that school teachers do not choose their line of work to become cops. Just like hospitals have to remain places of healing, and churches, mosques and synagogues as places of worship, schools have to remain places of teaching and learning. Guns don’t belong in any of these places. If we are forced into a situation where our teachers have to carry guns then we have failed as a society.

I think what would work best is if we ban the possession of semiautomatic weapons and pass common-sense legislation on background checks and mental illness. I’m saying this because it is high time for us to take some action by leveraging the students’ protest movement.

Lawmakers in Washington are facing intense public pressure to break their decades-long gridlock on gun control. A poll released by Quinnipiac shows that 66% of Americans now favor stricter gun control laws – the highest recorded by Quinnipiac since it started polling the issue after the Sandy Hook massacre in 2012. Another poll released by CNN showed support for stricter gun laws at levels not seen since the early 1990s. It found that 71% of Americans backed barring those under 21 from buying any type of firearm. Similarly, I can see several companies, banks and large retailers such as Dick’s, and Walmart taking steps to limit their sales of firearms.

This is, in part, due to the inspiring energy of today’s youth who are demanding change. It gives me hope where my hope was fading. It is time for all of us to stand up against guns. It’s time we think big. We must treat gun violence in this country as a public health crisis. It is our moral responsibility to act for one mission: that no one will ever be murdered in school again. Let’s make America safe again.

The author is a blogger about a variety of contemporary subjects inspired by her thoughts, feelings and passions. She was a contributor to a book “Food Prints” which was inspired by Pakistani cuisine. She is based in Washington DC. Her twitter handle is @ShaziahZ.