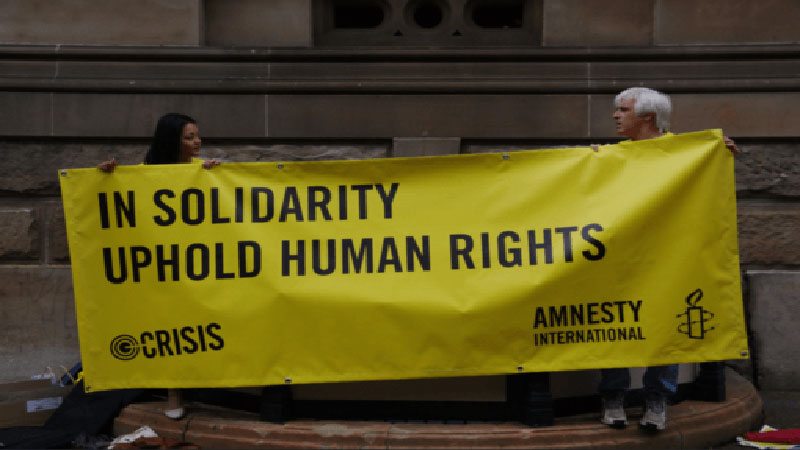 Amnesty International told me that it “does not take a position on the current application” of US economic sanctions that Trump’s administration imposed on Venezuela in August “but rather emphasizes the urgent need to address the serious crisis of the right to health and food which Venezuela is facing. In terms of human rights, it is the Venezuelan state’s responsibility to resolve this.” Amnesty’s full reply to three questions I asked them by email can be read here.

The expression that “silence gives consent” applies perfectly to Amnesty’s stance which tacitly endorses Trump’s aggression against the Venezuelan people. To make this even more obvious, Amnesty also refused to condemn remarks by Rex Tillerson and Marco Rubio that encourage a military coup in Venezuela. Asked to comment on those remarks Amnesty replied that it ”believes that a responsible discussion on the current state of human rights in Venezuela should not be focused on statements made by parties outside the country and context”.

In the middle of an already grave economic crisis, the sanctions will cost Venezuela’s government billions of dollars this year. Its $64 billion USD in outstanding foreign currency bonds are all governed by New York Law, but the sanctions have outlawed Venezuela from borrowing or selling assets in the US financial system. Debt restructuring is therefore made impossible and it blocks the government from rolling over its bonds (offsetting principal costs by issuing new debt). The sanctions also block CITGO, a US based company owned the by the Venezuelan government, from sending its profits or dividends (which have totaled about $2.5 billion USD since 2015) back to Venezuela.

US sanctions, which are illegal under of chapter 4 article 19 of the OAS Charter, are a direct assault on the Venezuelan peoples’ “right to health and food”. There is no avoiding this conclusion even if you believe the worst that has been said about Venezuela’s government. You’ll find it extremely hard to learn from the international media, but sanctions are not supported by most Venezuelans according to the same opposition-aligned pollster (Datanalisis) that the media has cited ad nauseam about Venezuelan President Nicolas Maduro’s approval rating.

According to Datanalisis, about 45% of the population received cash bonuses the government paid out over the past three months. Another opposition source – a group of Venezuelan academics who produce the annual ENCOVI surveys – claim that 87% of households have received direct food handouts from the government. The ENCOVI study is especially dubious as Jacob Wilson has explained, and its 87% figure is probably a wild exaggeration, but even if an accurate estimate is closer to 50%, the depravity of Trump’s sanctions and Amnesty’s refusal to denounce them should be clear from statistics produced by opposition sources.

Decent people were outraged by the sanctions that the US and its allies imposed on Iraq during the 1990s – a country that really was ruled by a dictator. They should be even more outraged that the same gang of states that devastated Iraq has been able to target a democracy thanks to a propaganda system in which big NGOs like Amnesty play an important part.

Incidentally, the impact of the US sanctions dwarfs any offers of humanitarian aid that have been made. That hasn’t stopped headlines like “Why won’t the country accept aid?”, and articles that invariably fail to explore what has been offered and how it compares to billions of dollars lost due to illegally imposed US sanctions. The annual program expenditures of groups like Caritas ($4 million) and the Pan American Development Foundation ($81 million) are a drop in the ocean compared to the impact of the sanctions.

I was disgusted but not surprised by Amnesty’s tacit support for Trump’s aggression against Venezuela for several reasons.

In 2010, Amnesty put out a statement claiming that there was only one TV broadcaster in Venezuela that had not been shut down by the government – an absolutely preposterous claim. Could the world renowned organization not afford to pay somebody to watch some Venezuelan TV or do any basic research?

Amnesty refused to recognize Chelsea Manning as a Prisoner of Conscience on ridiculous grounds, but has given that designation to Leopoldo Lopez – a man involved with four different attempts to violently overthrow Venezuela’s democratically elected government. One of them, in April of 2002, was briefly successful.

When the US government (helped by its trusty allies Canada and France) overthrew Haiti’s democratically elected president in 2004 and installed a dictatorship that ruled with tremendous brutality for two years, Amnesty’s response was seriously marred by political cowardice and double standards. About the kindest thing you could say about Amnesty’s work in Haiti, and in general, is that Human Rights Watch (HRW) has been even worse. For example, it took HRW years longer than Amnesty to make any serious contribution to the fight to hold the UN mission in Haiti accountable for killing 10,000 Haitians by bringing cholera in to the country in 2010. The key facts were well known by at least 2011 (as you can see from this petition) years before Amnesty took any significant action in 2015.

Norman Finkelstein’s latest book “Gaza: An Inquest into its Martyrdom” has a chapter devoted to thoroughly dissecting Amnesty’s reports on Israel’s savage “Protective Edge” assault on Gaza in 2014. Finkelstein wrote “By supplying Israel with pretexts for atrocities that were among the most heinous it committed during Protective Edge, Amnesty conveniently eased the burden of Israeli hasbara [propagandists]”.

In an email exchange I had with Amnesty regarding Syria in 2012, Amnesty defended a position which told Saudi Arabia, perhaps the most brutal and backward government on earth, to merely be careful about which rebels it armed in Syria. At the same time, Amnesty called for an arms embargo on almost entirely defenseless Palestinians.

Amnesty has repeatedly showed that it is not willing or able to denounce the brutality of the US government or its allies to anywhere near the extent that it should. One can have a long discussion about why that’s the case, but an appalling track record has been well established. People who live in United States, or in countries like Canada which regularly provide political cover for US crimes abroad, will have to work around and even against NGOs like Amnesty International to prevent their governments from continuing to destroy one country after another.