Sanctity of vote: The new PML-N rhetoric might end up delivering self-rule to Pakistanis 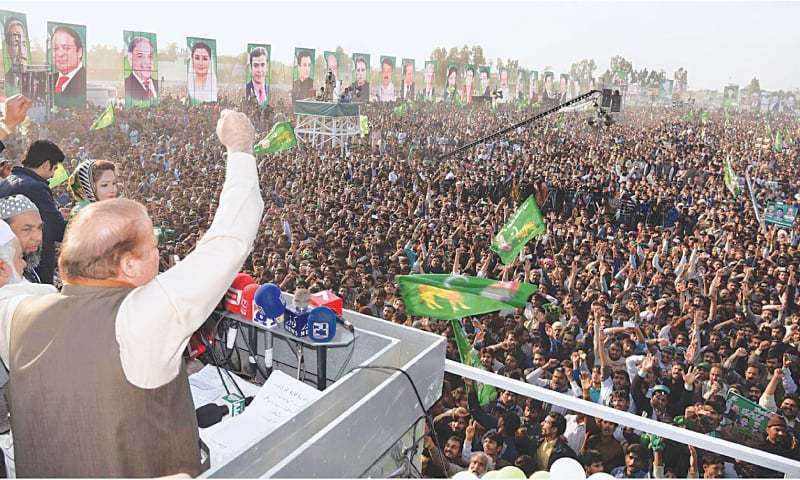 At the dawn of the New Year, Pakistan Muslim League – Nawaz (PML-N) brought forward the latest political rhetoric – sanctity of vote. Political Jalsas hosted by the PML-N saw large, emotionally charged crowds – a phenomenon that had, in many eyes, ceased to exist for PML-N post PTI’s popularity surge in 2011 – at one end and the Maryam-Nawaz duo chanting cries of injustice at the other. This is the election year and such rallies and Jalsas will not go un-indemnified. The honourable Supreme Court’s ruling of February 21, 2018 declaring the Political Parties Act of 2017 illegal will add further fuel to the blazing fire. The question here arises, as is being hotly debated in prime time talk shows, whether such a rhetoric truly is for the people or is it a dangerous game aimed at demoralizing and discrediting institutions of the state.

There has always been a struggle to balance the inequality of power between the rulers and the ruled. In the 20th century, democracy became the most successful political idea in this regard and Pakistan fully adopted it in the 1973 Constitution. Of the many types of democracies being exercised in the world today, Pakistan chose the one most popularly practiced i.e. Representative Democracy via adult franchise. This method empowers the population with a vote that allows them to choose an intermediary political actor between the individual and the policy outputs of the state. One of the major reasons for the popularity and success of this kind of vote is its equalitarianism due to its imperviousness to the individual’s gender, social class, education etc.

A representative of the people is supreme in authority to any state institution be it the military, the judiciary, the bureaucracy or any other. It is the role of the representative to act as a balance maker and keep the servants of the state from becoming Zimbardo’s prison guards.

The principle of democracy is all about delegation of power by the vast majority of citizens through a few chosen representatives on merit and competence. Fundamental to this kind of democracy is the exercise of voting. Not only is it a paramount right of all the citizens of democracy but also a foremost responsibility of the citizens to the democratic process itself. Voting is integral to the self-evolving nature of democracy and hence it is integral for each and every individual to make the effort of casting the vote and contributing to the decision making process. Unfortunately for Pakistan, almost half the population failed to deliver on this responsibility in the last General Elections. With 42% of our country’s population falling within the category of the millennial generation, we need to educate our youth not only of the power of vote but also of its sanctity, to ensure a better future.

A representative of the people is supreme in authority to any state institution be it the military, the judiciary, the bureaucracy or any other. It is the role of the representative to act as a balance maker and keep the servants of the state from becoming Zimbardo’s prison guards. Direct accountability of the people empowers these representatives with the wisdom to formulate policies, laws, economic plans etc. that affect the lives of the masses in the short and the long run. In Pakistan, our democracy has suffered countless blows which has prolonged its journey of transforming from the ugly duckling to the beautiful swan. Blame for this goes to many individuals belonging to many state institutions as well as to political parties themselves.

Our past is laden with judges and military men undermining the power of the people’s representatives. But they are not the only ones to be blamed. In the realm of politics, where much is said and done with exaggeration to gain mileage over competitors, opposition leaders have also used slogans that are deliberately misinformed. Some are borderline immoral and others are an attack on the personal front to emotionally stir the masses and incite sentiments of misrule. Though some complex debate might think it politic to play with such propaganda, it is of utmost importance that leaders be gentle with certain ideas that have long running consequences.

Of the many such politically enticing campaigns ever made in the politics of Pakistan, trying to discredit the domination of the Parliament and deriding its supremacy is by far the lowest any political element has ever gone. All due credit for this goes to the PTI leadership who have not only abused it in words at the start of the year but also have been heard boasting to topple the government with some help, making reference to non-democratic powers. This, unfortunately, was a direct blow at the people of this nation. The abused were the representatives of the people belonging to many parties and different political manifestos. What was damaged in this desperate move to gain popularity was the empowerment of a common man in his pursuit for self-rule.

This PTI move may have been made because of an inferior understanding of basic freedom rights or maybe it’s a case of colonial hangover infection; however, the prosperity of Pakistan resides in a much more dignified and honourable approach to Representative Democracy. Long has Pakistan and the region in general been governed by autocratic rule and autocrats have rarely lived up to the true spirit of people’s representation. The Prime Minister of United Kingdom, Theresa May, addressing similar issues said, “It is essential to democracy that the elected representatives of the people make the laws that govern this country – and not the judges.”

Fortunately, the dawn of 2018 brought to life a new hope. “Sanctity of Vote” is a slogan that may prove solid in the quest to establish a firm grip of the people of Pakistan on the affairs of the country. The people of Pakistan need to choose for themselves the laws that govern them and the policies they ought to live by; evolving and learning from their mistake as they make them. No autocrat, technocrat or bureaucrat has better knowledge about the needs of the nation than the collective wisdom of the people themselves. Sanctity of vote may just be the political rhetoric people will wake up to in the call for people’s empowerment.

Author is a student of Politics and works with the government on Research and Policy. He can be reached @aukniazi