Bangladesh has always prided itself on its multicultural and pluralistic society. In spite of having an overwhelming Muslim majority, the country has always preserved its secular and pluralistic fabric, mainly drawn from the syncretic Sufi Islam. Further, its strength has always been its linguistic and cultural identity of different religious groups.

Even the free thinking and secular Muslims, who have been voicing their concern over the growing fundamentalism, have been the target of attacks by the fundamentalists. Although Sheikh Hasina’s government has been quick to condemn such wanton attacks on the minorities and others, she has miserably failed to reign in the fundamentalists for vote bank considerations.

Today, the country is facing a political crisis after the arrest of the main opposition leader and two-time prime minister of Bangladesh Begum Khalida Zia, Chairman of Bangladesh Nationalist Party (BNP). A Bangladesh court convicted her and sentenced to five years imprisonment for illegal syphoning off of 21 million Takas ($252,200) from Zia orphanage Trust to her personal account.

Bangladesh has always had two dominant parties contesting the elections. Other smaller parties have no political presence, and they would not pose a threat to the present government

Her arrest has plunged the country into political uncertainty, especially when the verdict came immediately after the announcement of the parliamentary election scheduled to be held in December. Begum Khalida’s party is the only credible opposition party that can challenge the present government led by Begum Sheikh Hasina of the Awami League (AL).

The BNP cadres and other supporters have taken to streets in Dhaka to protest against her arrest. They have criticised the present government for political vendetta by fabricating a false case to keep her out of the next elections. The AL has nothing to do with this case, as the case was filed by an army-backed caretaker government.

It may be mentioned here that Begum Sheikh Hasina had no role in filing the case against her bête noire and nor can she be accused of the present conviction, as the Bangladeshi courts, by and large, have retained their judicial independence.

However, what is worrying is that they have threatened to boycott the December polls if the court does not release their leader. Even in the 2014 elections, the BNP boycotted the polls, giving a walkover to Begum Sheikh Hasina and her party. They boycotted the polls as their demand for the formation of a non-partisan caretaker government to oversee the polls was rejected by Hasina’s government. 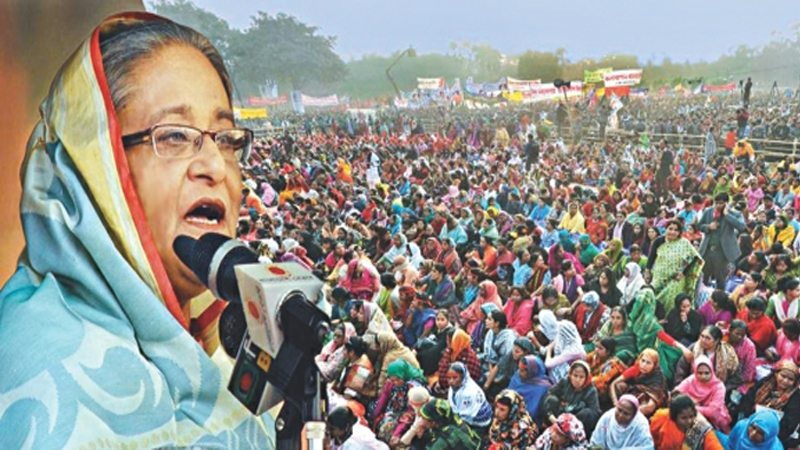 The whole exercise of conducting the elections turned out to be farcical, especially with a low voter turnout and also with more than half the parliamentary seats going uncontested. We are likely to see a similar situation if the present government goes ahead and holds an election this December.

As per the Bangladeshi law, if the BNP refuses to participate in the elections, the party faces the prospect of de-registration, paving for the third continuous term for the incumbent.

On the other hand, if the party agrees to participate in the elections, the party’s chances of winning the election would be impaired in the absence of Khalida’s leadership. Unfortunately, there is no one of her statures to lead the party. Her son, who is facing graft and murder charges, has escaped from the country to avoid arrest.

Bangladesh has always had two dominant parties contesting the elections. Other smaller parties have no political presence, and they would not pose a threat to the present government. The current government has been accused of large-scale corruption and money laundering.

According to reliable sources, if the court releases Begum Khalida Zia, the AL may lose the elections on governance and incumbency issues.

In a situation where the BNP decides to boycott the elections, the voters will be forced to cast their votes for AL, only to prevent the country from descending into chaos and political uncertainty. Such a situation does not bode well for democracy in Bangladesh.

For the moment, in the Begum versus Begum Battle, and it is advantage Sheikh Hasina.

The writer is an independent columnist and political commentator