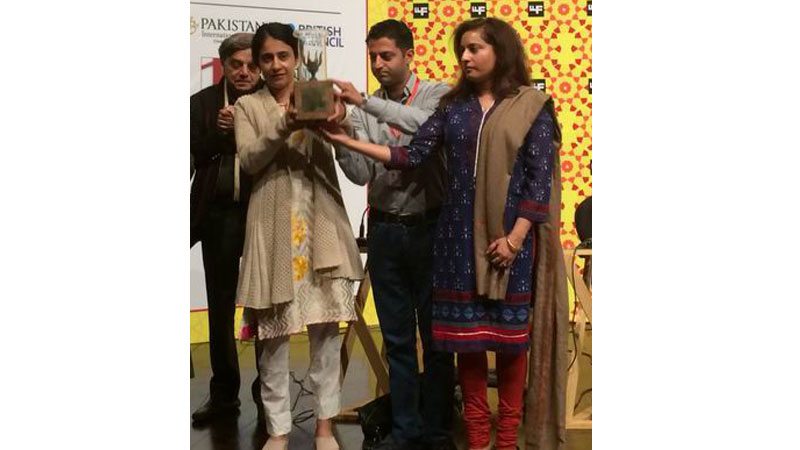 Late human rights lawyer Asma Jahangir was honured at Lahore Literary Festival (LLF) 2018 with an award during a session held to celebrate her life. The award was received by her children Munizae Jahangir, Sulema Jahangir and Jilani Jahangir.

It was a moving session with Asma Jahangir’s children sharing with audience different aspects of their mother’s life.

“Two weeks back, when I was at the hospital, the fighter that we know as Asma Jahangir, was unable to fight for her life. Just like any other child, I felt orphaned and helpless. But in the next few days that followed, I truly understood what her legacy was; she made people set aside their differences and celebrate humanity. She helped people realise how they could stand together with justice”, said a teary-eyed Jilani Jahangir.

Lyse Doucet remembered her as a fearless fighter while IA Rehman shared with the audience the achievements of Asma Jahangir in protecting rights of the marginalised communities. “It was Asma Jahangir’s report based on which the Supreme Court abolished bondage labour,” he recalled.

Salima Hashmi talked about her years-long friendship with Asma Jahangir which started and nurtured under the military rule of General Ziaul Haq.

“Asma’s story goes right back to her nurturing during her father’s fight against the first army dictator General Ayub Khan, and in that, she found the kind of awareness of what’s happening as her family was in the middle of it all. We developed a strong bond during the time our fathers were incarcerated; I have Gen Zia ulHaq to thank for our friendship”, said Salima.

Ahmed Rashid, journalist and author, revealed how Asma had all sorts of insights and information because there were so many people in the establishment who admired her and would leak information to her.

“She was under constant threat all her life but she just lived with it”, said Ahmed Rashid.

Munizae Jahangir talked about how her mother opened up a whole new world for her. “She was a very sensitive mother, she noticed our capabilities and interests and tried her best to develop them. I was a very naughty kid; she introduced me to Khatak dance and horse riding so that I wasn’t left with a moment to be naughty”.

My mother always used to say, “Dreams are to be enjoyed also, it’s not necessary that you realise them”, said Munizae.

At the end of the session, IA Rehman was also presented with a lifetime achievement award by LLF management for his life-long work for human rights.