Discourse of democracy in Pakistan

Pakistan is one of those countries where balance of institutional power oscillates between civil and military ends. Civil-military competition and objective control of the military has always been part of conceptual and intellectual debate in Pakistan because the country has experienced frequent military coup d’états and usurpation of civil authority at the hands of military men.

Thanks to the post-modernist French scholars who helped people understand this met narrative. They question the democracy as an objective scientific truth ‘as best form’ to be believed in. Rather, they considered it as a constructed political ideology that yields benefits to the powerful elite interlinked with global super power that controls this global capitalism through Bretton Wood institutions. For that reason, today’s postmodernists have revolutionary character and the left-wing rigor of the cold war.

Like peas in the pod, with identical philosophical rationale of free will and free trade, democracy and capitalism go hand in hand. Democracy promotion became corner stone of US foreign policy as soon as it achieved its unipolar moment, when, according to Francis Fukuyama, democracy emerged as the only legitimate form of government by defeating Soviet backed communism.

This democratic discourse of a super power was strategic and political in nature and part of the US-led world order to ensure ideological imperialism. Since discourses produce compliance or resistance through a systematic control of what people should know [at a particular period] and what not. End of cold war was expediently used to promote democracy and economic liberalism for the upcoming globalisation to go unchallenged.

In a post-truth and post-reality world, state must challenge the status que by deconstructing this delusional democracy to reclaim its lost leverage in the sands of civil-military debate, not as system of neutral truth but as eyes to see and ears to hear

Challenging the status quo and its institutions is liberal value in character. Deterring change is called conservatism. But, what if the liberalism upholds the status quo — with so-called democracy, equal rights, and freedom of expression. Unfortunately, contemporary Pakistan faces liberals as conservatives. Today, democracy and equal rights are nothing but illusion to legitimise the disparity through discourse. Freedom of expression is also encountering cyber scrutiny by government that criminalises the dissent through repressive laws and use of force.

In case of Pakistan, old leftist revolutionaries have now taken refuge in Washington sponsored democracy. Far right has become postmodern left in Pakistan that brings alternative facts by deconstructing the democratic credentials and identities identity in a very way to the postmodern-Left of 1980s.

Self-proclaimed liberals have intelligibly tailored their self-righteous identity as democrats (in line with Europe and US) against military rule through scripts and language. This would have not been possible without spin doctors from media aboard to do the bid of wealthy capitalists. They use binary oppositional construction of positive and negative, and legitimate and illegitimate identities.

They construct democracy — as positive and legitimate form of government and pitch it against negative and illegitimate military rule. Thereby, democracy as the best form of government will make sense when studied in the relationship of ‘bad military rule’. In this system people are merely ‘to be ruled’ commodity by the so-called democratic ‘rulers’. Because, as Jacques Derrida puts it, ‘there are no context without any force of anchoring’. By his standards, democracy as best form, is tailored by those who wish to stay in power using the attractive and deceptive words.

Hence, civil military debate becomes tussle between legal and illegitimate, where both cannot coexist. They form a hierarchy with positive governs the negative, democracy on top over military rule. 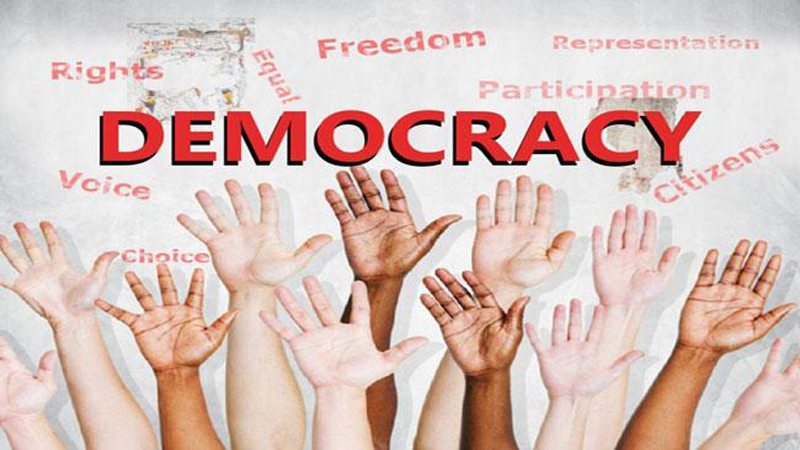 In general, dictatorship becomes even worse when democracy ensures public good by upholding the individual rights and liberties in the society. But, Pakistani politics, responsible for nothing and accountable to none, rests on ensuring number of votes and seats in the legislature. For that purpose, politicians rig elections, misappropriate money; when asked for deliverance or held accountable, they simply hide behind democracy by charging military for every failure attributed to them. Politics has been a vehicle to pursue private interests with impunity and allows them pile up their capital gains.

This competitive authoritarianism in the democratic wrap up, is raised on two societal cleavages: one, class based political structure built on division of resources and opportunities between the elite and the poor; second, identity [grounded on ethnic, regional, and religious affiliation] based majority/minority divide that rides high in national politics of the country.

These divisions are exploited by elite at the expense of ordinary masses. Elite does not invest in public and social goods that can subsequently remove social barriers at the expense of elite that wants to keep hierarchy in the system where they sit on top.

Democracy happens to stand on strong state institutions but, democrats use them for benefitting cronies and intimidating political opponents. This favouritism and nepotism has left the institutions impregnable and corrupt — more loyal to the political magnets than state. When institutions assert, corrupt politicians resort to democratic norms, take high moral ground and act as truth regime by charging all institutions as clash regime aligned with military men.

Since dictatorship has been successfully otherised, civil rulers get away with all their mischievous deeds not by performance but by construction. While comparing or contrasting the democracy and dictatorship in Pakistan, one finds both as capitalists and elitist in nature with less regards to economic well-being and human rights. This feudal-cum-industrialist-cum-bureaucratic pseudo democracy is even a double-edged sword because it operates with operational feasibility and rendered legitimacy; whereas, military regime has inherent illegitimacy as it lacks public endorsement.

In a post-truth and post-reality world, state must challenge the status que by deconstructing this delusional democracy to reclaim its lost leverage in the sands of civil-military debate, not as system of neutral truth but as eyes to see and ears to hear. The Right in Pakistan is struggling to stay in the contest as former faithful horses have aligned themselves with socialist revolutionaries of the cold war under the patronage of Washington.