The Quran is clear on genetic determinations by pointing out that Allah is the “One who shapes you in the wombs as He pleases.” (Quran 3:6)

All shapes, that is, all physical traits including sexual characteristics and inclinations of a human being come with the pleasure and permission of Allah. Every child, male, female or third gender, has the same blessings of God and there is no justification for parents, courts, or governments to engage in gender-based ill-treatment.

Our instinctive predisposition to eschew the oddities of nature can be one reason, but they cannot be an excuse for this lack of understanding and an overall insensitivity and unacceptability of a person’s non-conformity to the established traditional gender continuum. The fact of the matter is that the binary division of genders is so deeply embedded in our minds that a person can only be a man or a woman to demand his share of respect and rights as a human being.

Gender non-conformity is relentlessly punished through classified marginalisation and by pushing the non-conformists to the periphery of the society; thus, making these stigmatised beings vulnerable to the unthinkable psychological and physical violence. Fuzzy, sensational and vague stories surrounding the third gender roles, sexuality and their secretive customs and culture make it impossible for an ordinary person to comprehend, accept and tolerate their presence as part of society. The situation is more or less the same across the world. Of late, there has been a resentful acceptance and understanding, but that is still not enough.

In our society, khawaja’saras have been both revered and avoided. In the subcontinent, they are accepted in a few assigned roles of entertainers, dancers, beggars or sex workers. However, their acceptance as ‘normal’ and ‘equal’ human beings has always been an issue. They are considered social outcasts, not allowed a rightful place in the family circle, educational institutions or professional network; but only grudgingly tolerated on roads, streets and social spaces as beggars and dancers.

Trans children are in many cases, socially excluded by their own family members, who consider them as a cause of disgrace and stigmatisation for the whole family. As an outcome of this, these people face resilient isolation from society

In Pakistan, khawaja’saras live mostly within their own communities and within their cultural contexts, leading the most challenging lives characterised by discrimination and recurring violence. Usually, they live in groups of four or five or more as disciples (chelas) supervised by a master (guru). The guru imparts singing, dancing and other skills to his chelas to enable them to earn their living. The chelas are expected to turn their earnings to the guru, who uses this money for maintaining the household.

They impersonate many aspects of the female gender role; for instance, they dress up as women, imitate their gait, gestures, voice, facial expressions and language, but do not desire to be recognised as women. They take up feminine names when they join the khawaja’sara community, and use female kinship terms for each other like sister, mother, aunt, grandmother etc. Their major sources of income include singing and dancing on marriages, birth celebrations and other auspicious occasions, begging for alms and prostitution. However, there is a small educated English speaking class of transgender, which does not have to go through the same hardships due to their social and economic status. They usually become fashion designers, makeup artists, interior decorators and hair stylists or settle somewhere abroad.

The transformation of the Pakistani society, in the last few decades, has curtailed opportunities for khawaja’saras to practice traditional occupations and has increased their dependence on prostitution and beggary. Mainstream society’s deep-rooted apprehensions of their gender non-conformity manifest itself in the refusal of fundamental citizenship rights to these communities. With no safety net in the form of family, society or state; harassment, abuse, and sexual violence are the stark realities of a khawaja’sara’s day-to-day life. 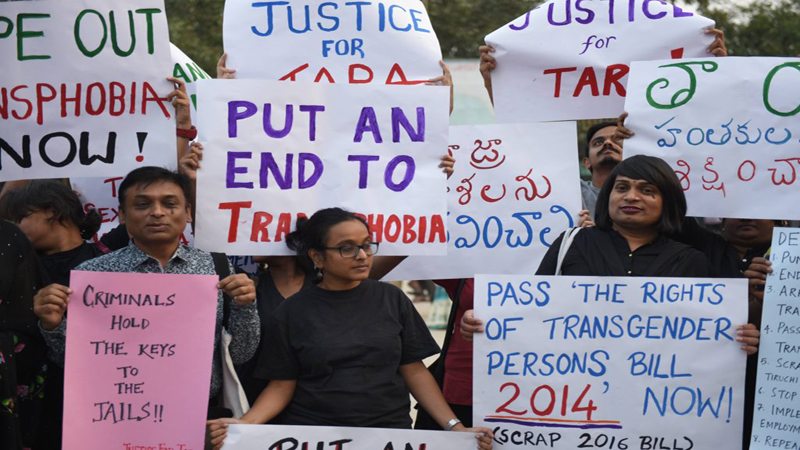 Holistically speaking, societal values, traditions, misrepresentation and misinterpretation of religion not only support but also reinforce aggression, violence and oppression against khawaja’saras. The general public considers them sleazy and evil for their inappropriate behaviour, vulgar gesticulation, obscene language, sundry jokes and involvement in sex work. The intolerance of the general society against khawaja’saras based on their actual or perceived gender identity or expression adversely affects their psychological, physical, social, and economic well-being. The society needs to understand that no reason is good enough to exclude these people from the mainstream, or the human race in general. Beliefs fabricated over centuries cannot be tattered without looking deeply into various institutions that disqualify a khawaja’sara from basic human rights.

Family as an institution plays a crucial role in the marginalisation of khawaja’sara. The intolerance of gender non-conformity in terms of attitudes, identity, and behaviour results in violent and insufferable attempts by family members at maintaining and reinforcing the more acceptable heterosexist regime. Schools are a nightmare. No one wants to sit near them in the class. Many times they are chased and harassed by the other students in schools and even the teachers’ attitude is no different.

Social discrimination in employment is one of the leading factors of their involvement in sex work. Abandoned by the family, unable to obtain proper documentation, education and jobs, many transgender children take up sex work to survive.

In most of the experiences shared, the most common grievance was the ill-treatment of khawaja’sara in government hospitals since most cannot afford to go to private clinics. The staff there asks disturbing questions regarding their sexuality and gender identity and most of the time refuses to give them proper treatment and medicines.

Transgender appear in mass media only as objects of ridicule and scorn. As far as the portrayal of the real-life dilemmas of the transgender community is concerned, there is a resounding silence. While depicting a transgender, the vernacular media, in particular, strictly follows the heterosexist point of view and exposes them as lurid, sleazy and evil.

Uptill 2013, they were not even allowed to have the national identity cards. As a result, they were not able to enjoy any of the rights of a citizen. Also, there are no statistical records of the hermaphrodite population present in Pakistan, as they were not registered in NADRA. They are not provided with the right of social security. Ultimately, the rights of hijras in Pakistan are confined to vote/contest in elections. Otherwise, they are victims of extreme social ostracism.

In 2016, the Islamic clerics in Pakistan ruled a fatwa that the third-gender individuals can marry and be buried with Muslims.

According to the fatwa, the khawaja’saras are human beings, and they have rights given by Islam. Gay marriage is illegal, and sodomy can be punished, but the Pakistan Supreme Court has ruled transgender people have the right to inheritance. The fatwa advised that third gender individuals having male attributes could marry women and those who were physically women could marry men.

The document of the fatwa revealed that making fun of transgender people, teasing them, or thinking of them as inferior is against Sharia Law because such an act amounts to objecting to one of Allah’s creations.

The human rights activists believe the fatwa allowing third gender individuals to get married won’t change anything. Marriage is not their foremost concern; they need education, health facilities and employment. Their economic status is so low that they have to beg on the streets.

For the solution of third gender problem, it is essential to work on the provision of fundamental human rights in the form of presentation of bills on federal and national levels in Pakistan. This is also recommended to start a campaign to change the absurd attitude of people towards the third gender with the help of media and on-going awareness sessions. In all the private and public sectors there should be a reservation of some of the seats for employment and education for them. Furthermore, all the stakeholders, including religious and community leaders can perform their part by correcting the misconceptions people hold related to hermaphrodites.

The writer is PhD Scholar in Media and Crime and can be reached at fastian.mentor@gmail.com