Indian propaganda and the Jadhav debacle

Through various propaganda means, India is trying to make an impression that Kulbhushan Jadhav was not apprehended from Balochistan but abducted from Iran — to prove that he is not a spy and terrorist but an innocent person. In this context, as mentioned in the Indian ‘Global Village Space’ on 19 January 2018, and the Hindustan Times on February 1, 2018, an interview with Abdul Qadeer Baloch, also known as Mama Qadeer, vice president of the organisation, namely ‘Voice for Missing Balochs’, now living in self-exile in Afghanistan, has been aired by an Indian TV channel CNN News -18. In that interview, Mama Qadeer stated to the anchor that Jadhav was abducted from Chabahar by Mullah Omer Irani, later moved to Mashkel, Iran, where he was handed over at the border to the ISI authorities for Rs 4-5 crores.

According to the newspaper, during the interview, Mama Qadeer testified to Jadhav’s innocence, saying that he was not captured when in Balochistan. Qadeer Baloch claimed that the source of his information is his organisation ‘Voice for Missing Balochs’. According to the Indian Global Village Space, Abdul Qadeer Baloch has assured the Indian channel that he’ll testify in the International Court of Justice (ICJ). The channel CNN-18 has said that India’s External Affair Ministry has sought the transcript of Qadeer Baloch’s interview.

There is no doubt that this propaganda to create targeted perceptions can be misleading for the ICJ, although persons like Qadeer Baloch have no credibility and these dissidents hiding in Afghanistan can be easily bribed by an enemy country like India to serve its ulterior motives. The credibility of Qadeer Baloch was exposed after his claim that 25000 people were missing from Balochistan was falsified, when the Commission of Inquiry on Enforced Disappearances headed by Justice (retd) Javed Iqbal stated in October 2017 that Mama Qadeer and his organisation could not provide any evidence to back their claims of missing persons.

The credibility of Qadeer Baloch was exposed after his claim that 25000 people were missing from Balochistan was falsified, when the Commission of Inquiry on Enforced Disappearances headed by Justice (retd) Javed Iqbal stated in October 2017 that Mama Qadeer and his organisation could not provide any evidence to back their claims of missing persons

Against this Indian propaganda, the fact remains that Kulbhushan Jadhav was arrested from Balochistan in March 2016, being a serving commander of Indian Navy and an Indian Research and Analysis Wing (RAW) spy and a terrorist.

The then DG ISPR Asim Bajwa had confirmed that Jadhav’s goal was to sabotage the China-Pakistan Economic Corridor (CPEC) through propaganda and also to create disharmony between the Baloch nationalist political parties. Jadhav also purchased multiple boats in Chabahar, Iran to target ports in Karachi and Gwadar. As shown by Pakistan on TV channels many times, Jadhav as also confessed to being a commander in Indian Navy and RAW spy and working on projects to disrupt peace in Balochistan and Karachi. Jadhav was sentenced to death by a military court in Pakistan on 10 April 2017, but India approached the International Court of Justice (ICJ), his execution was stayed, and the final decision of the court will come after hearing both Pakistan and India on the issue. 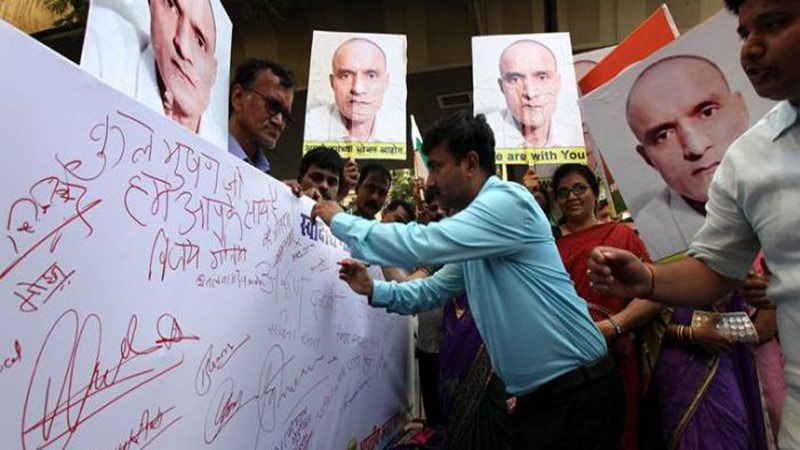 Since the apprehension of Jadhav, India has time and again changed its stance. Initially, it negated that Jadhav was an Indian citizen. Then, once Pakistan showed Jadhav’s Indian passport, India started saying that he is not an Indian naval officer and is a civilian who was carrying out his own business at the Chabahar port of Iran. Both these stories have been rejected by Jadhav himself in his confession that he was an Indian citizen, a commander in Indian Navy and assigned by Indian RAW to disrupt peace in Balochistan province of Pakistan by sponsoring terrorist attacks in the province. Recently, after meeting his mother and wife in Islamabad, allowed by Pakistan on humanitarian grounds, Jadhav has said on a Pakistani TV channel that he was surprised why India was not accepting that he was a serving officer of Indian Navy.

The issue is a sensitive matter for Pakistan. If it wins the case at the ICJ, it will be definite proof of India’s involvement in sponsoring terrorism in Balochistan. Therefore, while India is struggling hard through orchestrating propaganda and creating witnesses to influence the ICJ in its favour, it is crucial for Pakistan to remain vigilant on the matter to intercept and counter Indian propaganda.