In 1947, the majority of the Kashmiri population was Muslim and wanted to become a part of Kashmir

Kashmir is the oldest disputed area on United Nation (UN) agenda. Kashmiri Muslims have been the victims of Indian aggression for last seven decades.

Despite being suppressed for decades at the hands of Indian army, the spirit of rebellion and freedom hasn’t died yet. Their struggle for freedom has passed on to the third generation. Pakistani flags in the anti-regime demonstrations in the valley represent their love and connection with Pakistan.

They celebrate the events with Pakistan and observe India’s National Day as black day. They bury their dead bodies wrapped in Pakistan’s flag. They display their pro-Pakistan stance in every way possible. But yet, the world has closed its ears to the cries of Kashmir. 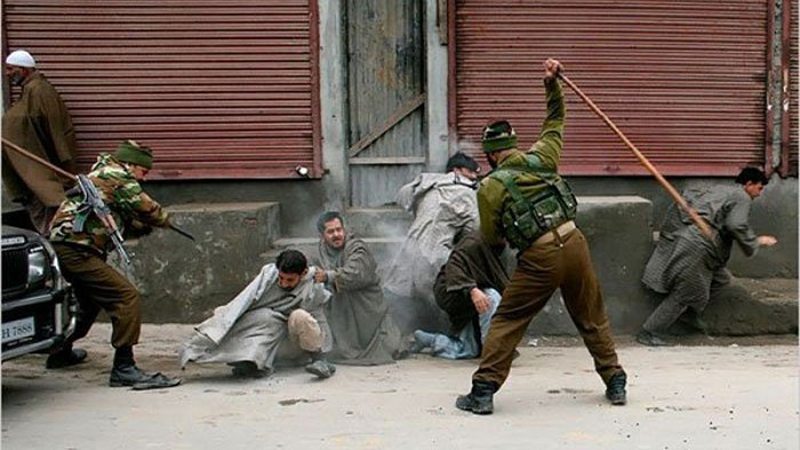 There are 22,864 widows in the restive valley whereas 107,686 children have been orphaned. Indian forces have destroyed 108, 658 structures including houses, shops and markets.

The ongoing Intifada started on 8th of July, 2016. Till now, approximately 21 thousand Kashmiris have been injured. More than 8,000 Kashmir were brutally injured by the illegal use of pellet guns. Eyes of over 1260 Kashmiris have been damaged. Schools were also set on fire by the forces.

In 1947, the majority of Kashmiri population was Muslim and wanted to become part of Kashmir. As per the Indian claims, on 26th October 1947, Ruler of Kashmir, Maharaja Hari Singh, signed a controversial Instrument of Accession to join India.

Ever since this document was allegedly signed, the Indian army has been in the control of this restive valley…

Pakistan’s founder, Quaid-e-Azam Muhammad Ali Jinnah asked the British Acting Commander-in-Chief General Gracey to send army to Kashmir but he refused to do so. Nonetheless, certain tribes entered into Kashmir, defeated Indian army and managed to make their way to Srinagar. Upon the defeat of his army, Indian Prime Minister Jawaharlal Nehru took the Kashmir issue to the United Nations Security Council (UNSC) in January 1948. On January 1, 1949, both countries agreed to a ceasefire after the UN intervention.

Kashmiris have done their part. Now, it’s the duty of the Pakistani government and nation to support them

UNSC Resolution passed on 21st April 1948 states: “The question of the accession of the State of Jammu and Kashmir to India or Pakistan will be decided through a free and impartial plebiscite.” In 1953, governments of the both countries agreed to appoint a Plebiscite Administrator by the end of April 1954. India is resisting plebiscite efforts till now.

The following freedom struggle began after 20th of January 1989, when Indian army killed 100 unarmed Kashmiri protestors at Gawakadal Bridge. Consequently, the Kashmiri youth launched an armed struggle to get their right of self-determination.

At the end of February 1989, approximately 400,000 Kashmiris marched in Srinagar and demanded the plebiscite. Meanwhile, Mass graves have been found in Kashmir valley, where thousands of Kashmiris have been dumped into unmarked graves. There are substantial reports of thousands of Kashmiris being forcibly disappeared by Indian forces since 1989.Kashmiri traders have suffered millions of loss due to curfew.

Meanwhile, International institutions including UN are playing role of silent spectator. UN has passed many resolutions in the favor of Kashmiris, but none of the resolution could be implemented.

India is fearlessly disgracing UN resolutions. To conclude, Kashmir’s freedom movement is now at its peak. Kashmiris have done their part. Now, it’s the duty of Pakistani rulers and nation to support Kashmiris.

The writer is freelance columnist based in Lahore. He can be reached at [email protected]