We reached Bahawalpur in the evening and were starving by the time we checked into the hotel, so went straight to have dinner afterwards. It was the New Year’s Eve, which is why all the restaurants were jam-packed. Luckily, we were able to find the ‘Kebabish Grill’ but had to wait really long for the food to arrive, as the place was quite over-crowded. The delicious food was worth the wait, however, and their mutton roast is definitely a must try if you are a meat lover. The Thai soup wasn’t bad either, expected that one cannot find good soups from desi eateries, or maybe it was just that we were just really hungry. 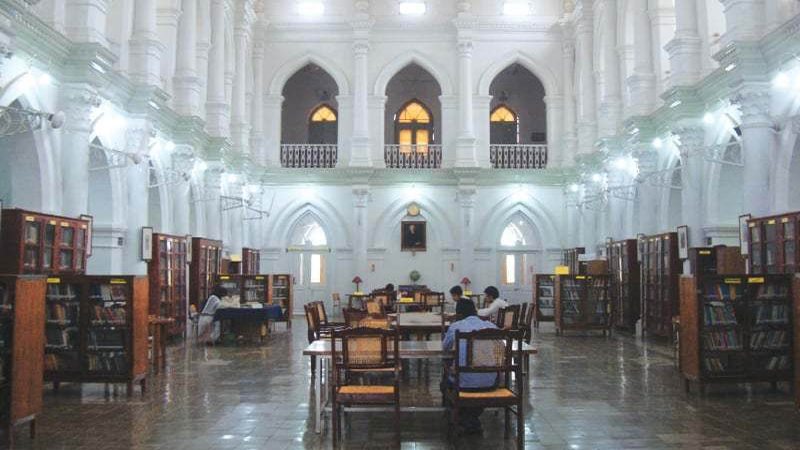 A friend from Bahawalpur had told me that there was an amazing light and sound show organised at Noor Mahal every Saturday night. The show covered the history of the place, with some amazing light and sound tricks. Since it was New Year’s Eve, we were expecting arrangements to be even grander, so we headed to Noor Mahal after having dinner. But to our disappointment, some private gathering for army personnel was being hosted at Noor Mahal that night, due to which the public was denied access to the premises. We could not even have a look at Noor Mahal itself at the occasion, this was a major downer. 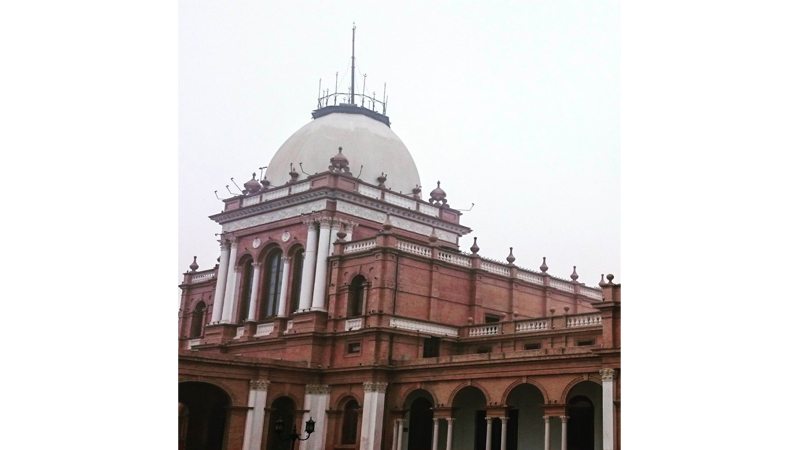 On our way back from Karachi we stayed in Multan for two days. Luckily, one of those two days happened to be a Saturday, so we decided to drive back to Bahawalpur on the evening to attempt catch the light and sound show one more time. This time though, we tried contacting the relevant authorities via phone prior to visiting the place, but the numbers given on google were incorrect and we could not get through. We decided to take the risk of driving to Bahawalpur anyway. Our hearts could not have been more shattered once we found out that even this time around a private party for the army was being hosted there. We were not allowed to go in yet again. 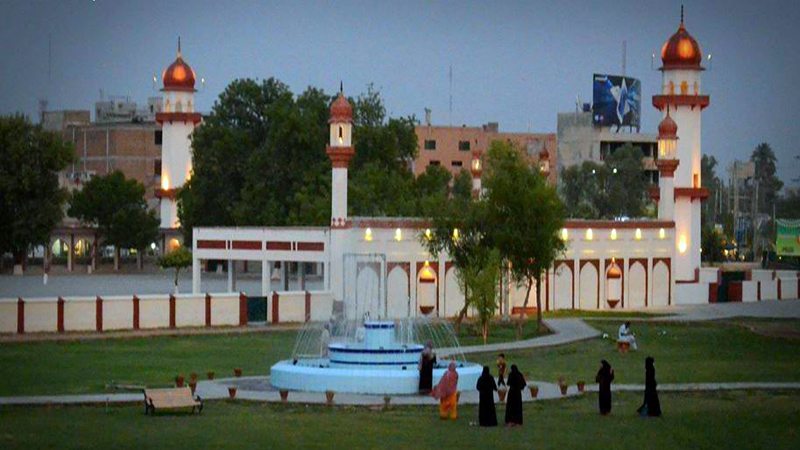 Since our plans to watch the amazing light show turned to dust, we roamed around the rest of the city to save the day. Bahawalpur looks beautiful at night with its well-lit buildings. The minarets of Bahawalpur Eidgah glow in all their might as well.

The city has a lot of character and leaves one mesmerised by its beautiful architecture and history. The rapturous palaces, old gates and adjoining markets make you spell-bound for sure. Bahawalpur somewhat looks like Lahore from the olden days, when it was not taken over by the congested madness of traffic and overhead bridges. 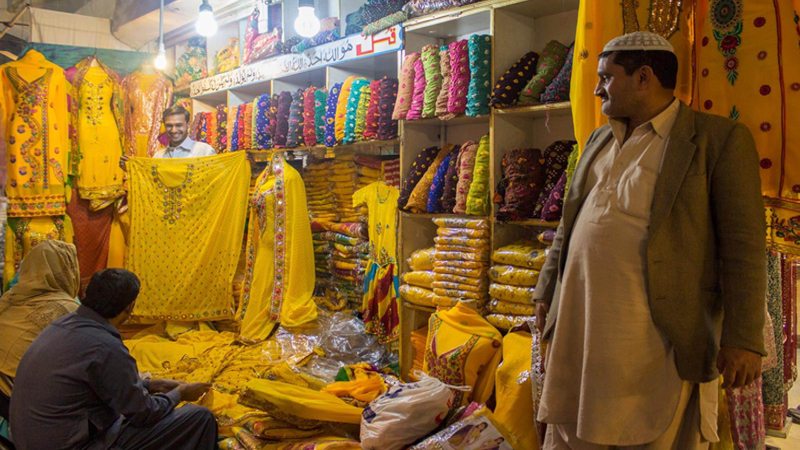 While roaming around the old markets of Bahawalpur around midnight, we came across a pretty yellow scooter from the 80s, which the owner still used for his daily commute. He was absolutely in love with it, and so was I. Somehow, I have always been obsessed with scooters and even planned on buying one for myself at that point in time, but the plan never materialised; maybe, one day it will.

Bahawalpur also offers really delicious street food. Whenever in the city, you must try the yummy dahi bhalay and fruit chaat from Shaukat Naz Foods, which is a renowned shop in the old market. The kulfi we had from Bismillah Ice cream shop was amazing too, as it had a very crisp texture and tasted more like frozen barfi. 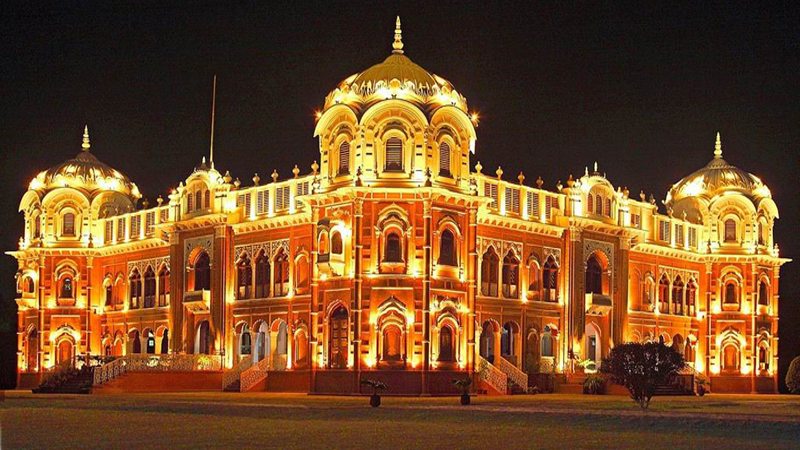 Of course, you should not even think about leaving the city without getting some yummy sohan halwa from the famous Haji Rasheed Sweets and Bakers. Else, you might regret it later.

The next morning, we roamed around the city some more and went to check out the beautifully designed Bahawalpur Library and Museum.

Despite making two attempts of visiting Noor Mahal at night, to see it in its full glory with its lights complimenting its beautiful architecture, we were only able to visit the site during daytime.

Nawab M Suba Sadiq Abbasi IV ruled Bahawalpur from 1866 to 1899. The construction of Noor Mahal was undertaken by him; he was popularly known as the Shah Jahan of Bahawalpur for his passion of constructing beautiful buildings. State map and coins were buried in the building’s foundation before the start of its construction, as a good omen. Most of the material and furniture was imported from England and Italy, and the palace’s construction was completed in 1875 at a cost of Rs 1.2 million

The interior of Noor Mahal is equally beautiful as well, with its colorful ceiling and interesting patterns.

Nawab M Suba Sadiq Abbasi IV ruled Bahawalpur from 1866 to 1899. The construction of Noor Mahal was undertaken by him; he was popularly known as the Shah Jahan of Bahawalpur for his passion of constructing beautiful buildings. State map and coins were buried in the building’s foundation before the start of its construction, as a good omen. Most of the material and furniture was imported from England and Italy, and the palace’s construction was completed in 1875 at a cost of Rs 1.2 million. Noor Mahal was initially built for residential purposes, but later it started being used as a State Guest House and for hosting important meetings. In 1956, when Bahawalpur was merged into Pakistan, the building was taken over by the Auqaf department. The palace was leased to the army in 1971, and they acquired it in 1997 for a sum of Rs 119 million.

This sums up our short stay in Bahawalpur. There is so much more to explore in this beautiful city, but due to time restrictions we could visit only a few places, leaving the rest on the bucket list for next time.

The writer is an avid traveler with a penchant for experiencing new things. She is the owner

of ‘The Mad Hatters’ and blogs at aneeqaaliblog.wordpress.com