Lessons for Pakistan in the Indo-Israel relationship

The two countries have been growing closer ever since India established diplomatic ties with Israel in 1992, though the former had officially recognised Israel in 1950

The optics exhibited quite a euphoria last week in India as the Israeli Prime Minister Benjamin Netanyahu landed there. Indian PM Narendra Modi broke the security protocol to reach Delhi’s Palm Airport to be captured with a hug. Later, there were luxurious dinners, visits to Taj Mahal, Gandhi’s memorial and then to Bollywood stars.

But this was not what he was there for. He was accompanied by 130 delegates from Israel who held meetings to promote ties in bilateral trade, defence, cyber security, intelligence sharing, agriculture, space, science and technology.

Relations between the two countries have been growing intimate ever since India established diplomatic ties with Israel in 1992, though the former had officially recognised Israel in 1950. Since 1992, bilateral trade between India and Israel has risen from $200 million to more than $4 billion in 2016-17. This does not include defence figures. A military shopping list of India for Israeli arms ranging from Heron drones to Barak 8 air defence systems has taken swift upward rise. India last year signed the biggest weapons deal with Israel worth $2 billion. If the pace kept augmenting with the same zest, Israel might replace Russia as India’s largest arms supplier.

But realpolitik falls far beyond the bonhomie of bear-hugs and effusive sentiments. That is why India favoured Palestinian stance in the UN General Assembly last month by voting against recognising Jerusalem as Israel’s capital.

In the early period since the occupation of Palestinian areas by Israel with the crafty hands of world powers, India desisted from being intimate with Israel. In 1946, Gandhi said, “why should they (the Jews) resort to terrorism to make good their forcible landing in Palestine?”

There were many reasons for Indian hesitation to having formal cordial ties with Israel, mostly being domestic. One, the Indian politicians feared that having close ties with Israel would jeopardise their Muslim vote bank in India. Two, making strong ties with Israel would weaken India’s stance over the division of the subcontinent – Pakistan came into being on the plea of Muslims having a different religion and culture, so was the reason to make Israel. Three, a great number of Indian people worked in Arab countries, so being close to Israel could embitter the Arab-sentiment which might have left an impact on healthy remittances sent by those workers there. Four, with a view to domestic energy needs, India never wanted to spoil relations with oil-producing Arab countries by constructing affinity with the nascent Jewish state.

Aside from the moral expressions of solidarity with the Palestinian issue and the two-state solution, India has always desired closer ties with the Zionist state

Aside from the moral expressions of solidarity with the Palestinian issue and the two-state solution, there has always been an underway Indian desire for closer ties with the Jewish state. In 1949, when India voted against Israel’s admission to the United Nations, Hindu Mahasabha and RSS leaders supported Jewish nationalism and protested India’s stance. And then during Sino-India war of 1962, Israeli PM David Ben Gurion helped in supplying arms to India; and also in the war with Pakistan in 1971, another Israeli PM Golda Meir secretly supported India. In the Kargil war of 1999, Israel gave laser-guided missiles to India.

This is how the office of material convenience commands in the fast-changing paradigms of world communities where the state’s ties are determined by regional, domestic, strategic and economic interests. For India, too, its interests are the foremost away from the visuals of moral standings on this and that issue.

Having ties with Israel does not debar Saudi Arabia from conferring the highest civilian award on Mr Modi of Gujrat. At the same time, India shares amicable links with Iran – Israel’s arch-rival. Thisis reflected in India’s investment in developing Iran’s Chabahar port with $500 million- a move motivated by India’s strategic designs to counter Sino-Pakistan’s venture at Gawadar Port. Indian company National Aluminium is also pouring investment in the construction of a smelter in Iran. 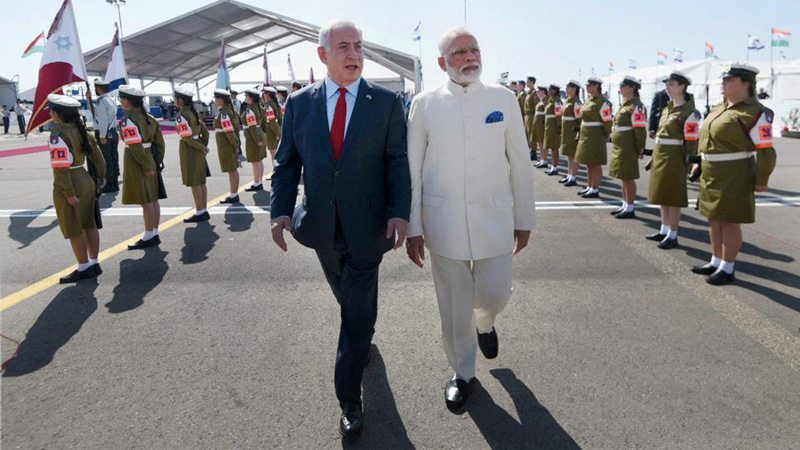 Foreign policy pragmatism embedded in the mundane principles of realpolitik does not facilitate India only. Israel, also, maintains friendly relations with China – India’s ostensible foe, and Japan – China’s rival. Israel’s largest trading partner in Asia is China with anannual bilateral trade to the tune of $11.4 billion. Then again Israel, while ignoring deep Indian concerns, welcomes One Belt One Road initiative by China.

Per contra, Pakistan’s foreign policy parameters are often determined by religio-political and ideological sentiments. Pakistan has always been inimical to Israel in open support to Palestine at every forum. Our mosques keep resonating with prayers for the freedom and peace of the Palestinians.

During Zulfiqar Ali Bhutto’s tenure, Pakistan signed an agreement with PLO for training their officers in Pakistani military institutions. PLO missions were also given diplomatic receptions in Pakistan in 1975. During Israel-Gaza conflicts, Pakistan has evermore been raising voices against Israeli aggression on defenceless Palestinians. Palestine’s embassy was also inaugurated in Islamabad by Palestinian President’s visit to Pakistan on 31 January 2017.

But something strange happened last month in the aftermath of Trump’s message as to moving the US embassy from Tel Aviv to Jerusalem. There were huge protests in Pakistan showing harshest of anger against Trump’s tweet. In one such demonstration, Palestinian envoy Walid Abu Ali shared the stage with Hafiz Saeed, the head of the Jamaat-ud-Dawa.

India resented this and officially called the envoy’s association with Saeed “unacceptable.”  The Palestinian Ministry of Foreign Affairs replied that the envoy’s participation “in the presence of individuals accused of supporting terrorism” was “an unintended mistake, but not justified.”

There are lessons for Pakistan in such episodes. Realpolitik demands individual state’s interests purely motivated by its benefits derived from political, strategic and economic gains.

As for as the tenets of a pragmatic political approach based on individual state’s interest are concerned, Henry Jhon Temple,a British Whig who served twice as Prime Minister of England in themid-19th century, beautifully delineated them in one of his speeches on March 1, 1848.He uttered there are “no eternal allies and no perpetual enemies. Interests are eternal and perpetual….”