As is often the way when we are confronted by the brutality of men — the talk turns to women, in a bid to have the spotlighted refracted

The lives of Palestinian children don’t matter. The same is true of their security as well as their physical safety. For those who live under the ongoing military occupation are robbed of not only land and water — but also of their sentient.

Sixteen-year-old Ahed Tamimi is the latest child to bear the brunt of Israeli force, not to mention its criminal injustice system. Today, she stands charged with aggravated assault against two Israel Defence Force (IDF) soldiers; as well as 11 other indictments including incitement on social media and a handful of other similar altercations going back over the last two years. Video footage of the latest incident that took place back in December went viral. It showed the unarmed Ahed shoving, slapping and kicking the soldiers, who had weapons and were wearing protective combat gear, in her village in the occupied West Bank. She could now face up to 10 years in prison. The Israeli education minister has gone on record as saying that she, her mother and cousin should be locked up for life; with the keys absolutely thrown away.

This is how demonstrations under an illegal occupation all too often turn out. Ahed and her family had been protesting Trump Town’s recent Jerusalem shuffle that sought to unilaterally kill off the two-state solution. Yet the world remains largely silent. Just as it did when, a day later, the Israeli security establishment shot dead wheelchair-bound Palestinian activist Ibraheem Abu Thuraya (along with three others); who had taken to the streets of Gaza to similarly object to Washington’s decision to move its embassy to the disputed city of Jerusalem. Abu Thuraya was also unarmed, apart from the Palestinian flag he was said to be carrying at the time.

As is often the way when we are confronted by the brutality of men — the talk turns to women. The latter find themselves pitted against each other in calculated efforts have the spotlighted refracted. Thus there has been much talk of how those western feminists who were so quick to rally round Malala have been so utterly backwards in coming forwards regarding Ahed; especially when they seemingly like nothing better than rescuing girls of the Global South. Sadly, there is nothing very surprising about this at all.

The very real tragedy here is the resounding failure to recognise Israel’s state-sponsored violence as being at the very least on a par with that of the TTP. For just as education was Malala’s fundamental right — so, too, is it Ahed’s to grow up in her own homeland, free of an illegal occupation

But just to be clear, this isn’t about Malala shaming. After all, she did nothing wrong. She is a brave young woman whose very survival and determination ought to leave the Pakistani state feeling disgraced every single day; for she fought a battle for education that ought not to have been waged by a child. But, then, we all know that here in this country the religious right fear nothing more than girls being educated and that the state dreads nothing more than losing the support of the men-in-beards. And while all of this is true, it isn’t the point being made here. Meaning that the West, for its part, likes to construct a false hierarchy of human rights to better wrap up in artificial packaging its warmongering agenda. Thus Malala became the unwitting poster girl for the Global War on Terror; complete with the tagline: we need US drone so that Malala can live. And feminism-for-profit buys into the headlines.

It therefore becomes easier to applaud those who fall victim to so-called enemy combatants such as the Tehreek-e-Taliban Pakistan (TTP) or Boko Haram. Because the lines are clearly demarcated given that such groups seek to overthrow the state itself. Whereas in neighbouring Afghanistan the fight is against non-state actors, the Taliban, who were, of course, once in government; although recognised by only three foreign regimes. Today, this group has adopted the mantle of an armed anti-imperialist struggle that won’t rest until the Americans leave their country.

It is similar story in Kashmir, where there are no international calls to take the issue of the disputed territory back to the UN for the simple reason that the world’s largest democracy is essential to US regional ambitions; just as Israel’s survival is imperative to American control of the Middle East’s vital resources. Indeed, here in this country, the US assumes the role of unlawful actor by way of its drone programme that targets our tribal badlands. That this is conducted with the tacit approval of the Pakistani state more than muddies the waters while making it harder for Islamabad to call out Indian human rights atrocities in -held Kashmir when it allows the extrajudicial killing of its own people. Thus does the Pakistani state become complicit in backing Washington’s narrative that presents the victims of its drones as threats to the security of the state; not to mention that of US soldiers across the western border.

This is the same role in which the Israelis have forever endeavoured to typecast the Palestinians. Thereby effortlessly covering up the violence meted out to Palestinian children like Ahed. Rather than admitting that it has the blood of generation upon generation on its hands — the Jewish state finds it far more convenient to hold up the Middle East as a region that will never be ready to embrace ‘universal’ concepts of human rights and democracy. 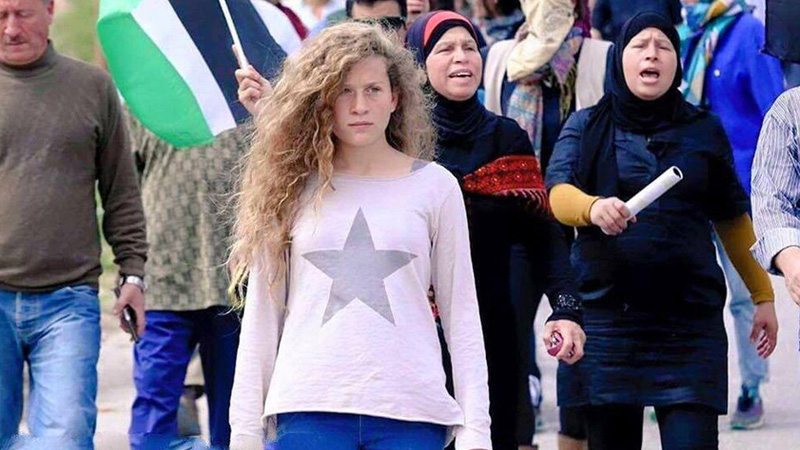 Thus Ahed’s crime, as noted by Shenila Khoja-Moolji in a piece for Al Jazeera is this: “Her feminism is political, rather than one centred on commodities and sex. Her girl power threatens to reveal the ugly face of settler-colonialism, and hence is marked as ‘dangerous’”. Naturally, such opinion, however sound, invites detractors. Like the Israel-based writer and researcher Petra Marquardt-Bigman. Writing on the American pro-Israel blog Elder of Ziyon, she makes much of the fact that back in September, Ahed posted on her Facebook page a photograph of gunmen masked with Palestinian keffiyeh scarves and an accompanying Arabic tagline which read: “Tell the fighters all over the world that they are my friends” Only she doesn’t stop there. Marquardt-Bigman goes on to say that Ahed would have considered ‘heroes’ the hurly burly men of the Pakistan Taliban that shot Malala.

The very real tragedy here is the resounding failure to recognise Israel’s state-sponsored violence as being at the very least on a par with that of the TTP; in fact, it is in many ways worse given that as the occupying power it alone is responsible for the security of those whom it denigrates day in and day out. For just as education was Malala’s fundamental right — so, too, is it Ahed’s to grow up in her own homeland, free of an illegal occupation that has been linked to programmes of systematic ethnic cleansing.

Amnesty International has called for the teenager’s immediate release in accordance with Israel’s obligations under the Convention on the Rights of the Child. This includes ensuring that the arrest, detention or imprisonment of a child is only carried out as a last resort and that, too, for the shortest period possible. Yet according to Defence for Children Palestine (DCI) — the only local human rights organisation advocating exclusively for the rights of children of the occupation — Israel’s security establishment prosecutes around 500-700 Palestinian minors in juvenile military courts every year. Indeed, other human rights organisations on the ground say that some 350 Palestinian children are languishing in Israeli prisons today.

Amnesty International Deputy Director for the MENA region Magdalena Mughrabi has described Ahed’s detention and military trial as exposing “the Israeli authorities’ discriminatory treatment of Palestinian children who dare to stand up to ongoing, often brutal, repression by occupying forces”. It’s all that and more. The sooner the international community realises that the game is up and that the Middle East will never know peace while the Palestinians live under military occupation — the sooner Ahed and her compatriots will come to know what childhood really is.