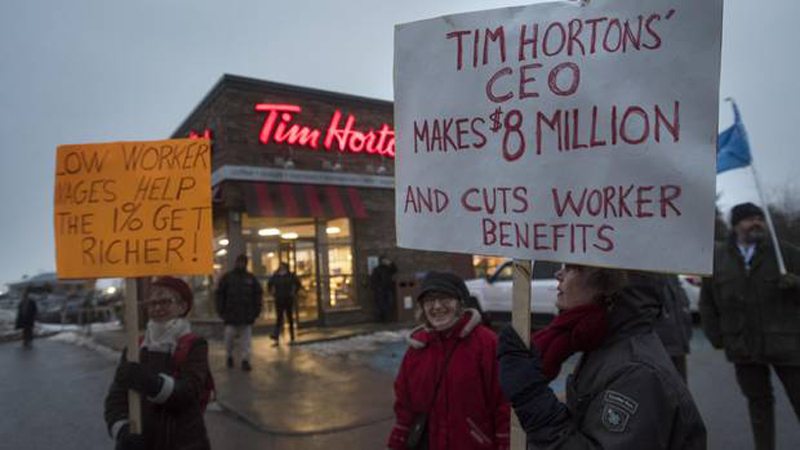 Over the past few months, the minimum wage has risen in nearly every province, with Ontario’s 23 per cent increase since September – up to $14 per hour – the largest. Now the controversy surrounding the changes has resurfaced, thanks to a number of Tim Hortons franchises telling employees they will cut benefits in response.

Many have condemned the franchise owners for putting profit before employee welfare. However, we should not be the least bit surprised: Economic theory predicts this exact result when the government mandates a wage increase.

Economists call it the “law of demand.” As the price of something rises, the quantity demanded tends to fall. And much like the law of gravity, the higher you go, the harder you hit the ground.

Most of the time, the minimum wage’s effect is hard to see. It’s usually hidden in shorter employee hours and increased workloads, price increases and cost-cutting by reducing the quality of service provided. In this case, however, the company that owns Tim Hortons limits franchise owners’ ability to raise prices and hasn’t lowered the cost of the supplies that franchises have to purchase.

So instead, franchisees’ short-term alternative is to push down labour costs. In this case, it means eliminating free uniforms, ending paid breaks and even reducing what they contribute for employee medical insurance.

These may seem like relatively small costs in the larger scheme of running a business, but restaurants operate at a razor-thin profit margin of around 4 per cent (compared to the average business profit margin of almost 9 per cent). Since wages generally account for one-third of total costs, Ontario’s minimum-wage increase could have pushed up some restaurants’ costs by 7 per cent, completely eliminating their profitability – and an unprofitable business eventually employs no one.

The changes have been a frustrating shock for the employees affected. For the rest of us, it offers a useful and sobering lesson: The minimum wage isn’t a magic policy that creates extra income out of thin air. It has to be paid for by someone – employers, customers or even the employees themselves.

We take a lot of minimum-wage-based changes for granted. Two decades ago, it was normal for a fast-food employee to fill your drink; today, we’re often handed a cup and directed to a dispenser. That’s not a bad change; we’re all perfectly capable of filling our own drink. But this and many other changes, like drink-filling machines at drive-thru windows and iPad ordering stations, have gradually reduced the need for workers. At a time when tensions are high over machines replacing low-skill labour, minimum-wage hikes tip the balance toward machines.

In fact, as the minimum wage continues to increase, there’s more and more pressure on businesses to find cheaper ways to serve customers. Wal-Mart is now experimenting with an expanded self-checkout system which could eventually completely eliminate cashier jobs.

Economists call this kind of change “hysteresis” – a permanent reduction in the demand for workers – which occurs when outside forces motivate employers to fundamentally change their production process. The result? It’s even harder for people without advanced skills and training to find a job, because fewer are created in the first place.

Some of these changes might be inevitable as society moves toward a more automated, knowledge-based economy, but a higher minimum wage artificially accelerates them. And although most minimum-wage research focuses on the short-term impact on young workers, in the long run it also leads to fewer jobs for older workers who are less likely to go back to school or learn a specialized trade.

In essence, minimum-wage increases can push low-skill workers into a future they’re not ready for yet. Given that half of Canada’s population (Ontario and Alberta) face yet another increase within a year to $15 per hour, we probably haven’t seen the last of the minimum wage’s unintended – but completely predictable – consequences.