With packed festivals attracting tens of thousands in a rock concert-like atmosphere that defies security threats in a growing cultural renaissance, such festivals provide great opportunity to draw the attention of the public towards books 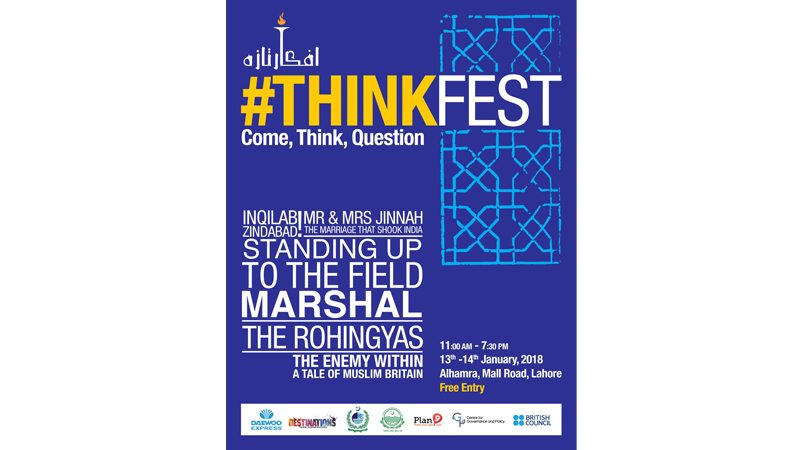 The Information Technology University (ITU) Punjab is all set to hold the second edition of the Afkar-e-Taza ThinkFest at Alhamra Arts Centre, The Mall, on January 13-14, said a press release issued on Thursday.

“The Afkar-e-Taza ThinkFest is the first of its kind festival in Pakistan which focuses solely on fostering creative and innovative thinking and aims to promote the forward-looking, progressive and modern vision of Quaid-e-Azam Muhammad Ali Jinnah,” it said.

The festival is free and open to the public.

Successive Pakistani governments, influenced by the religious right have done little to encourage artistic and literary expressions. With decades of obscurantist narrative dominating the socio-political discourse and fabric, the society is far from being tolerant enough of the debate and book culture.

However, the literary arena in Pakistan is witnessing a change. With packed festivals attracting tens of thousands in a rock concert-like atmosphere that defies security threats in a growing cultural renaissance, the literary festivals are perhaps the only safe and liberal-friendly centers. For a nation whose entire generation has grown up amidst terror attacks and suicide blasts, such literature festivals can provide great opportunity to draw the attention of the public towards books.

The title of this event is taken from the Poet Laureate Sir Muhammad Iqbal’s poem Takhliq (Creation), where the full verse reads, in translation: “New worlds derive their pomp from thoughts quite fresh and new/From stones and bricks a world was neither built nor grew.”

Indeed, this is exactly what this event is hoping to achieve. It is through new and fresh ideas which spur on new creation, innovations and development that new worlds are created, never by bricks or mortar but through the thoughts which germinate in the minds of the people.

There is a real dearth of intellectual activity in Pakistan, especially in the social sciences and humanities. Neither do we have high quality research coming out of the country, nor do we have many world-class scholars working in the country. There is also very limited public engagement with social science and the humanities and therefore discourse is often mired in conspiracy theories and flights of fantasy.

To radically change and shake up the intellectual environment in Pakistan, the Afkar-e-Taza (New Thoughts) festival will bring together scholars from across the social sciences and humanities in an academic yet accessible discussion of cutting edge research and knowledge. The concept behind the event is to replicate the rigour of an academic conference with paper presentations, with the ease and accessibility of a literature festiva, by engaging scholars in a lively discussion about their research with the general public

There will be over 20 international speakers, 60 national speakers and 30 academic institutions. Tawakkol Karman, Nobel Peace laureate for 2011 and Baroness Warsi, Chairman of the Conservative Party, Rt UK will be the keynote speakers at the event. The Alhamra Arts Council will be converted into an interactive space for panel discussions, theater performances, a special exhibition on the Partition of 1947 by distinguished artist Farida Batool, a film festival featuring international films from 6 continents, a speaker’s corner for author meet and greet, book signings, cultural performances and a music concert by the last of the Ghazal legends, Ustad Ghulam Ali.