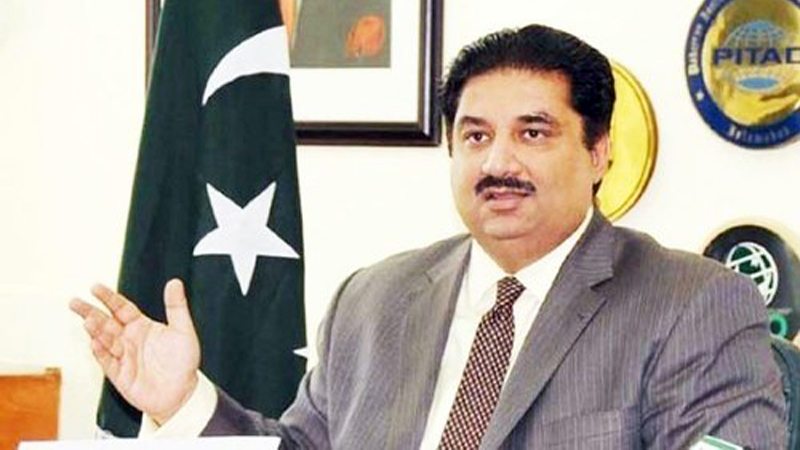 ISLAMABAD: Defence Minister Khurram Dastgir Khan Tuesday disclosed that Pakistan has suspended defence and intelligence cooperation with the United States amid growing tensions over US suspension of military aid to Pakistan.

US officials have said in a series of recent statements that almost all security assistance to Pakistan has been suspended following President Donald Trump’s Tweet on January 1, in which he had alleged that Pakistan “gives safe haven to the terrorists we hunt in Afghanistan, with little help.”

He also wrote, “United States has foolishly given Pakistan more than 33 billion dollars in aid over the last 15 years, and they have given us nothing but lies & deceit, thinking of our leaders as fools.”

Pakistani leaders had earlier showed restraint despite allegations by the American leaders and aid suspension but the defence minister’s statement could be seen an indication of growing tension.

“You see the facilities that we have extended to them (Americans) are still in operation. We have not suspended them. But there is also a wide field of intelligence cooperation and defence cooperation which we have suspended,” Dastagir said at a Public Talk on “Contours of Security Environment of Pakistan”, organised by the government-run Institute of Strategic Studies Islamabad (ISSI) under its Distinguished Lecture Series.

An US embassy spokesman did not confirm the defence minister’s statement.

“We have not been formally notified of any suspension,” he said a response to a query late Tuesday.

A press release issued by the ISSI did not mention the minister’s remarks on the suspension of the defence and intelligence cooperation; however, an audio clip of the minister is available who offered the comments during question-hour session.

The defence minister also said that the ground and air facilities to the US forces are still open.

Referring to the US suspension of Pakistan’s aid, Dastagir said, “The recent suspension of military aid by the US comes in the wake of a more grave suspension, which is suspension of the strategic dialogue for more than a year between the US and Pakistan,” according to the ISSI statement that was also posted on the ISSI’s website.

He also complained that the United States has not extended help to fence the porous border with Afghanistan to stop the cross-border movement of the militants.

“It is convenient to blame Pakistan for cross-border terrorism, where the US has not lifted a finger to help fence-up the border,” Dastgir said.

“Now all veils are off…It is time for a courteous yet ruthlessly candid dialogue between Pakistan and the United States,” he went on to say.

The US has long been alleging that Pakistan is “providing sanctuaries to the Afghan Taliban and the Haqqani Network,” which are blamed for attacks on the US-led foreign and Afghan forces.

The US leaders have been pressing Pakistan to take action against the Afghan Taliban and the Haqqani Network but Dastagir said “Pakistan remains adamant that the Afghan war will not be fought on Pakistani soil.”

Dastgir succinctly briefed the audience on the security landscape of Pakistan. He started with how the Pakistan Government has not only revitalised long standing relations with both Saudi Arabia and Turkey, but has also made progress with countries like Iran and Russia. About China, he remarked that as the China-Pakistan Economic Corridor materializes, relations between the iron brothers are further firming up.

With regard to India, he said that Delhi has an unremitting hostile stance and is a belligerent and highly militarised neighbour.

“The Cold Start doctrine against Pakistan has already been confirmed previously by Delhi. The past year was the deadliest yet for Indian violations on the LOC. Justice,” the Minister said, cannot be delivered on Mumbai alone, it has to be delivered on Samjhauta Express also.

He stated that for nearly two decades, the United States has deemed India as an ally to counter China and has been trying to convince Pakistan that India is not a threat. However, he said that threat is calculated on capacity, not intent, and both the capacity and intent of India is hostile towards Pakistan.

The minister went on to say that what “we need to remember and fully internalise is that today’s Pakistan is a post Operation Zarb-e-Azb Pakistan – which is one of the largest anti-terror operations in the world.”

“The way forward is not through threats, notices or suspensions of supports. This distracts everyone from, the prize, which is sustainable peace in a democratic Afghanistan. While this remains on the highest agenda of Pakistan’s foreign policy, Pakistan remains adamant that the Afghan war will not be fought on Pakistani soil,” he said.

He said Pakistan sees Afghanistan as a sovereign neighbour and wishes to see its neighbour prosper as a democracy.

“The recent suspension of military aid by the US comes in the wake of a more grave suspension, which is suspension of the strategic dialogue for more than a year between the US and Pakistan. He ended his speech by stating that we need choose cooperation over castigation and the resilient democracy of Pakistan will continue to rise,” he said.

“President Trump’s outburst has invoked a huge frenzy, and his ill-considered approach toward Pakistan is being criticised within the US as well. As fate would have it, Pakistan’s geographical location dictates that its security environment is of vital importance to the entire region,” he said.

Ambassador Mahmood stated that Pakistan and the US have always had a transactional relationship. “Even though the relationship is at its lowest, we should continue to keep the lines of communication open and find whatever common ground that exists.”