The most significant fallout of the unrest is the mounting criticism of not just the moderate Rouhani but also that of Ayatollah Ali Khamenei, a traditionally revered figure in Iran

The recent protests in Iran should serve as a warning to the country’s leadership of the importance of affecting economic and political reform. After all, those who took to the streets have shown that they can’t be cowed by the heavy handedness of the regime.

This anti-government unrest, which has now moved northwards, was sparked by rising prices of eggs, poultry and other basic goods affecting millions of people.  And ordinary Iranians are holding President Hassan Rouhani responsible for the present economic crisis, including failure to usher in much needed economic reforms and creating job opportunities for the youth; all of which featured in his pre-election mandate of last year.

Moreover, the citizenry has shown its resolve and has proved willing to risk life and limb for what they believe is a just cause. More than 20 people have died as a result of clashes with the police. Yet what may be the most significant fallout of all this is the mounting criticism of not just the moderate Rouhani but also that of Ayatollah Ali Khamenei, a traditionally revered figure in Iran.

One of the reasons behind the regime’s failure to make good on election promises has been its focus on the continuing conflicts in Syria, Iraq and Yemen. And even though experts have termed this necessary strategic involvement to counter Saudi influence in the region — this does not detract from the fact that such great games have consumed resources that were much needed at home.

Fortunately for Tehran, these largely spontaneous protests have started petering out. This is in direct contrast to those that gripped the country back in 2009. The latter had specific goals, including seeing Mahmoud Ahmadinejad, the then president, step down over allegations of electoral fraud. In addition, the so-called Green Revolution had at its forefront blighted presidential candidates Mir Hossein Mousavi and Mehdi Karroubi. This time around, however, there has been no unified command and those taking to the streets had no instruction from ‘above’. Not only that, neither the middle-class nor the elite joined the street agitation, thereby robbing it of much needed impetus. Another reason for its dwindling success is that the demonstrators are said to have raised too many competing issues; ranging from economic reform to regime change.

Iran’s young generation feel betrayed by Rouhani and his promises to prioritise economic reform. That any moves towards the latter have not materialised means that the youth do not see much of a future, if any, under his leadership. Yet any attempt to unseat Rouhani will only manage to strengthen the hands of the hardliners

Iran’s young generation feel betrayed given how they had put their faith in Rouhani and his mandate that pledged to place economic reform at its core. That any moves towards the latter have not materialised means that the youth do not see much of a future, if any, under his leadership. Yet any attempt to unseat Rouhani will only manage to strengthen the hands of the hardliners, a prospect dreaded by many.

Be that as it may, it is, nevertheless, unfair to blame him for all of Iran’s economic ills.  In fact, due credit ought to go to Rouhani over his securing a nuclear deal between his country and world powers led by the United States. After all, this brought with it a lifting of economic sanctions as well as the unfreezing of billions of dollars’ worth of assets. Sadly, with Donald Trump at the helm Washington is now setting about unravelling all the relevant documentation upholding the agreement; thereby forcing Rouhani into a more than hopeless situation. 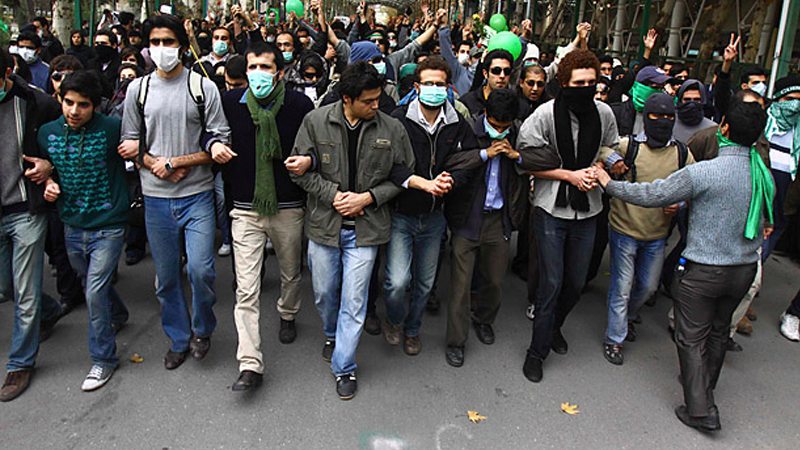 And this is something that pleases the hardliners. Meaning that the latter represent the real power centre controlling big business in Iran, with their wealth coming through closed economy profiteering. Thus any attempts by Rouhani to open up the national economy will severely impact their hold on commercial concerns in the country. Nothing therefore would make the hardliners happier than to see the back of the moderate president.

But all is not lost. Not if Rouhani begins listening to the concerns and aspirations of the Iranian citizenry on the economic front. In order to achieve any kind of reform in this regard, he will have to win the support of Ayatollah Ali Khamenei, who still exerts considerable influence over the hardliners. In addition, he will also need that of both the judiciary and the security services. This is not to forget the ousting of those who manipulate financial markets from behind-the-scenes. For naming and shaming them is the first step towards their marginalisation.

Elsewhere, the US and other nations stand accused of fanning the flames of discontent in the Islamic Republic. Moreover, Iran has also laid blame for the present economic crisis squarely on the shoulders of the Trump administration. This is not without reason given that it has still to unfreeze billions of dollars’ worth of assets; despite Tehran having signed the Joint Comprehensive Plan of Action, popularly known as the Iran Nuclear Deal.

Nevertheless, Tehran should also understand that the deadly crackdown on the “The Day of Rage” demonstrators (2011-2012) has done nothing to deter the people from street agitation to register their consternation over the economic direction the county is heading towards. Thus the current regime should take the opportunity to learn an important lesson: never take the citizenry for granted. Meaning that if the latter has legitimate concerns — such dissent will never truly go away. Therefore far better to act now and address these than risk the unseating of the Rouhani government; which would inevitably throw the entire country into chaos.

As for Washington, it may want to rethink its open support of the protestors given that this unwittingly may end up strengthening the hardliners’ hand. Thus the US should seriously consider lifting all existing economic sanctions. As this is the only way to viably support the moderate Rouhani and his government when it comes to economic reform. For how else is Iran expected to weather the current crisis?

The author is an independent columnist and political commentator