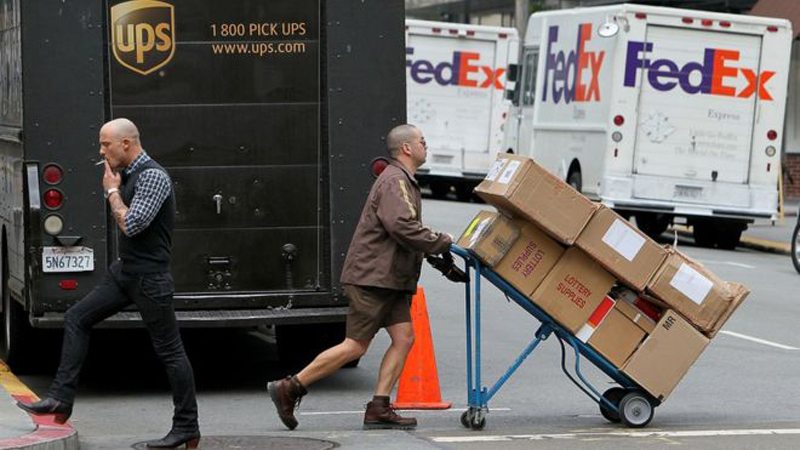 Online shopping is skyrocketing. So what are cities going to do about it?

By the time veteran UPS driver Thomas “Tommy” Chu leaves work, he will have picked up and delivered hundreds of packages in New York City, making some 16 stops an hour as his company hurries to meet the online shopping rush.

But what may be his most impressive feat of the day precedes that scramble: at precisely 10:02 am, Mr Chu snags a parking spot. This is no small victory in midtown Manhattan, where one survey found truck drivers can spend as long as 60 minutes circling for a space. Often, drivers simply give up and risk a ticket.

“Most times, you have no choice. If there’s no parking, you have to double park,” Mr Chu says.

Double-parked trucks, red brake lights and cardboard boxes littering the sidewalk: this is what the growth of online shopping looks like on the ground in America’s largest city – and not just here.

The rising numbers of deliveries are adding to concerns about traffic and pollution in rapidly growing cities around the world.

Forced rethink: In Europe and Asia, cities have barred deliveries during certain hours, built warehouses to centralise distribution and provided millions in funding to encourage firms to switch to quieter, greener equipment.

In the US, where the car has been king and the revival of dense city centres is relatively recent, discussions about how to handle the glut of online shipments were somewhat slower to start. But they’re happening now.

“They’ve been forced to think more about it in cities because that’s where we see the coming together of these pressures in a real, urgent way,” says Professor Anne Goodchild, director of University of Washington’s Supply Chain Transportation and Logistics Center. “There’s been a recognition at the municipal level that this has to now be what we plan for.” Online sales in the US remain a relatively small slice of total retail trade – about 10%, compared to roughly 15% in China, 17% in the UK and 18% in South Korea. But they are growing fast, and are on track to increase about 16% this year.

Mr Chu, 49, started at UPS in 1990. He has watched as deliveries – mainly residential – have grown, as companies such as Amazon push to make near-instant home delivery the norm and as shopping habits change.

When he started, he says, “Nobody ordered water. Now, they order everything.”

Start-ups such as Deliv are getting in on the game and during the busy holiday season, firms employ thousands of seasonal workers to help cope.

On a recent weekday, it took Mr Chu roughly 30 minutes on truck-jammed streets to travel from the UPS hub to his first stop, an office skyscraper near Bryant Park, about 1.5 miles away.

Once parked, he spent almost two hours dropping off packages in that building. And he was not the only courier at work: staff from FedEx and the US Postal Service also sped through the hallways. “That’s a lot of stress on the environment,” says Jose Holguin-Veras, a professor at Rensselaer Polytechnic Institute, who has studied freight deliveries in New York.

Company solutions: Firms are experimenting with ways to make deliveries more efficient, and bring down costs.

They have embraced ideas like lockers, rolled out eBikes in select locations, and pushed for people to collect items in stores.

Amazon has even started selling a smart lock, which will allow couriers to let themselves inside homes to drop off packages, reducing failed deliveries.

“The problem is simply too complex. It’s too tough to be solved by a single sector,” he says.

This autumn, in response to the increasing congestion, New York Mayor Bill de Blasio announced a test ban on deliveries during commuter hours on some of the city’s most crowded streets.

The city’s Department of Transportation wants to get 900 businesses to shift deliveries to off-peak hours – currently there are 400 participants.

“Our challenge is really to figure out how to make the system work efficiently,” says Diniece Peters, from New York City’s transport department.

Different solutions: Cities in Europe have taken other kinds of steps. Paris, for example, has sponsored logistics hubs, while one of London’s bus operators is looking at the possibility of using buses for parcel delivery.

In the US, where deliveries have become increasingly privatised, it will be tough to import some of the ideas being embraced overseas, says Prof Goodchild, who is studying urban deliveries with a group of city officials and private companies in Seattle. Their work is focused on cutting back on the number of failed trips and reducing the time couriers spend inside buildings, among other efforts.

“There’s a different background. I also argue there’s a different set of solutions because of that,” she says. A major factor shaping the efforts is new technology. Right now, deliveries are expensive, especially as firms such as Amazon opt to shield consumers from the costs. Analysts expect that some day soon, companies will deploy robots for indoor deliveries, harness drones for remote drop-offs and enlist fleets of quiet, electric-powered driverless cars to make deliveries at night. City leaders are following the developments closely, says Stefan Knupfer, a senior partner at McKinsey, who has worked on reports about mobility initiatives and collaborated with a network of cities known as the C40. “For all of us, this is a little bit of the beginning of a revolution,” he says. courtesy bbc news