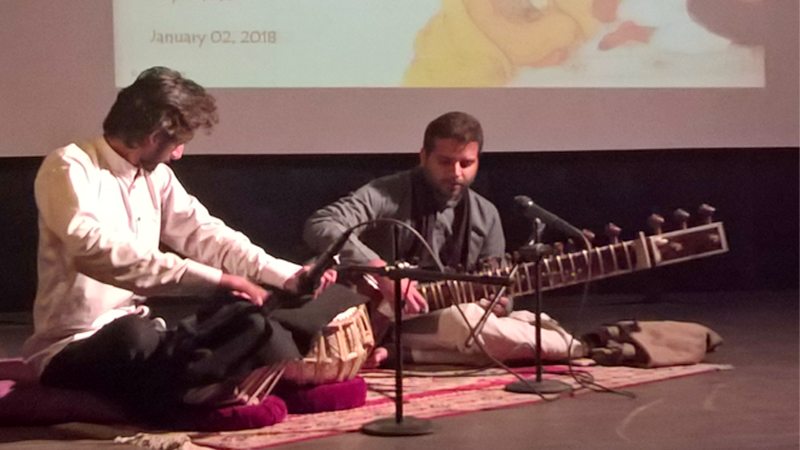 LAHORE: Olomopolo Media arranged a talk by Ally Adnan on Hindustani classical music on Tuesday in Lahore. He was accompanied by Rakae Jamil on Sitar and Asher Samuel on Tabla who gave live examples of whatever he talked about.

Ally Adnan talked about the origin of the term and explained that it does not have anything to do with Hinduism. He said that when the Persians first settled on the banks of River Indus, the region began to be known as Hindustan. The word Hindustan itself is composed of both Persian and Sanskrit, and the religion of the inhabitants was named after the land.

He also talked about the fundamentals of Hindustani classical music and explained the significance of Sur and Taal as its backbone.

Talking about the origin of Sur, he said, that the inspiration for Sur came from nature itself.

“Man drew inspiration for Sur from nature and created a sound that could be reproduced and appealed to the heart,” he said.

He said that not all sounds were melodious and the reason why certain sounds were universally accepted to be melodious was because humans evolved to appreciate nature.

Ally also talked about the classification of Sur, the concepts of Raag, Ras, Waqt, Thaat and Lay.

Following the talk, Rakae and Asher performed Raga Bhairavi which was met with applause from the audience.