We were once the proud partners of the magnificent Muslim empires in the Indian sub-continent, but as the empires decomposed, we have gradually become a pernicious people whom every other nation wants to keep at an arm’s length and under watch

The Hagia Sophia was built in 537AD as a grand Orthodox Christian basilica in Istanbul and remained so till the Ottoman conquest in 1453 when it was converted into a mosque. It was secularized to become a museum in 1935 by Kemal Ataturk which it remains so today.

The imperial grandeur of this imposing but simple structure is to be seen to be believed. Inside, on the entrance to the main prayer hall are two huge marble urns placed side by side for the needful lustrations before prayers for the Muslims from the times of Sultan Murad-III somewhere towards the end of 16th Century.

These were being chiselled out of a single block of stone each by European craftsmen, since Hellenistic times. These pitchers have not moved ever since. They look strangely luxurious in an essentially frugal ambience which saturates the interior of the church.

Referring to the history of the urns in Aya Sophia has a metaphoric similarity. I will come to that as I proceed. When societies and communities degenerate and are on their way to extinction, debates about absurd abstractions and indefensible hypotheses surface and are passionately pursued.

Our sitting rooms, seminar halls, media talk shows and public rallies are resonating with arguments which are normally dismissed as frivolous and the speakers as insane or at best low witted matched by equally strange attires and medieval robes as if they have just arrived in the wake of the Golden Horde or left out by Lord Clive’s Madras Office.

Their emphasis always seems to be on unilateralist wisdom dusted out of a crumbling ancient mausoleum or Calcutta Presidency and total condemnation of opposing views. Before the sack of Baghdad by Helagu Khan in 1258, the city square was occupied by the fiery theologians and thousands of partisan listeners arguing whether a crow was halal or not. The Mongol Army had laid a siege and broke through the city walls, massacred the population and let the crows have a field day.

The outcome of our pitiably irrelevant socio-political debates is as good as the dialogue of the deaf. It is as if the Sophia pitchers were talking to each other. The pitchers remain fixed to their original plat forms for the last 400 years and have not moved an inch closer, physically or ideologically.

We too have become a nation of stone urns incapable of listening, accommodation and adjustment to each other’s world view. We have not budged in inch from our own little fire trenches . We want everyone to see how we see and believe the way we do. We live next to each other but are hardly ever willing to understand other’s point of view, create a common cause or allow each other space to grow. 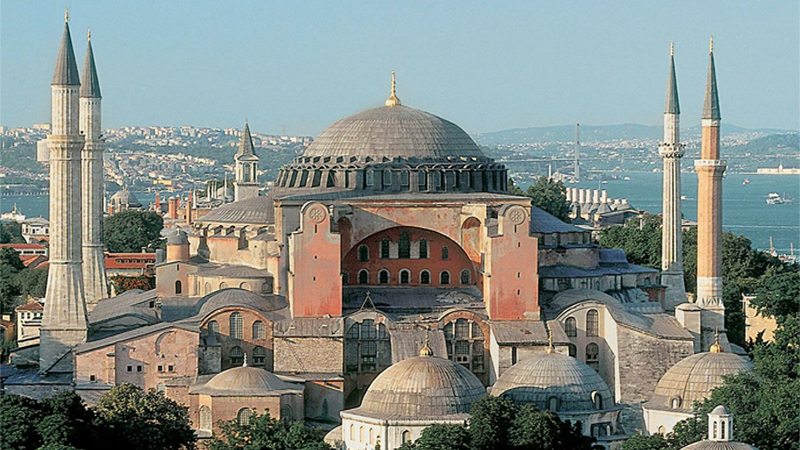 Even blind Dolphins of the Indus are comparatively more civic minded than us. They live and swim together. We see only to discard, live to repel and gather to divide. Our courtesies are spurious, our manners have become superficial and our thoughts have crusted and rotted badly.

We mean to say nothing and we say to mean nothing. There is,perhaps, none better than us in chasing its own tail and reach nowhere. Put these people out to the field and see the remarkable Darvish pirouette by each one of them.

Urns of Aya Sophia were a proud Ottoman possession and were erected at a place of honour within the grand Mosque. They have become a curiosity and museum pieces through disuse and changed values of the host nation.

We were once the proud partners of the magnificent Muslim empires in the Indian sub continent, but as the empires decomposed, we have gradually become a pernicious people whom every other nation wants to keep at an arm’s length and under watch. That is not what we and our children deserve.

There are millions and millions of men and women who had lost their parents, grandparents, friends, family and generations of respect and property for making this country. Through that act of collective will and perseverance, this gifted country cannot be left to the scavengers to tear apart and destroy. There is immense goodness and industriousness in our people and they can rise again to an honourable place among peer nations provided we are rid of the wicked band of uncouth political leaders, spiteful mullahs, pseudo intellectuals and self appointed reformers busy dumping the nation into the world’s garbage ditch. Let’s not let this happen.

The writer can be reached on clay.potter@hotmail.com