Integration of Muslims and Pakistanis in US society 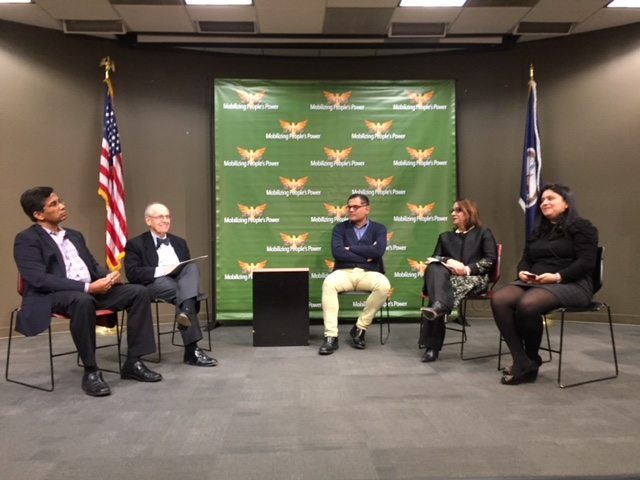 The objective of the event was to highlight the importance of integration in a society. Marvin Weinbaum stated that integration is a society takes place at the individual as well as the collective level. He further added that hundreds of thousands Pakistanis are living in the USA and sixty percent of them have a graduate degree. He was of the view that Pakistani diaspora in the US is playing a critical role in the development of the country but there is still a room for improvement and maximize the potential of this community.

Riffat Chughtai stated that like other communities as a Pakistani we must integrate into this society and contribute in its development and as a community, we need unity and hard work to establish as a valuable community in the USA. Silveth Khawaja a young Pakistani American pointed out that the US is a country where everyone gets an equal opportunity to flourish in life and Pakistani community is taking a good benefit of it. She encouraged Pakistani community to provide quality education to their children so that they can play a positive role in the society as a whole. Salman Siddique stated that Pakistan’s contribution in the field of providing medical doctors is commendable and it is a fourth largest contributor of doctors in the USA. Likewise, Pakistani diaspora should also contribute in other fields of life.

Raza Rumi said that integration was a two way process. Issues of racial inequality in America complicate this process. However, Pakistanis need to engage with local polticis and social movements to gain more relevance in the US society. Diaspora looks towards home but they have a critical role in today’s climate to join hands with other immigrant groups for better integration.

President of INDUS, Athar Javaid and Chairman Board of Trustees Shehzad Habib welcomed the participants. Shehzad Habib during his remarks highlighted that the need for greater awareness of groups, organization and communities’ meaningful contribution towards integration definitely needs to be emphasized. He further pointed out that groups, organizations, and communities, therefore face a special challenge and a specific responsibility towards the process of integration.

Athar Javaid, President INDUS introduced the event by welcoming all and stated that we are pleased to announce the community integration event & civic promotion program. He highlighted that it is our effort to facilitate and deepen community integration, promote the concept of responsible citizenship, and highlight pathways to realise the potential that America offers.