Without an iota of doubt, nature has blessed Pakistan with inestimable treasures for those who are fervent to explore. No one ever denies the exquisiteness of northern areas, but few have taken much time to be unearthed.

The Astola Island is one of them, which is a hidden virgin place to rejoice the magnificence of nature. This place is also called as Jezira Haft Talar (Island of the Seven Hills) and breath-taking moments of sunset from these hills are unforgettable.

It’s a small uninhabited island in the Arabian Sea almost 25 kilometres away from Pasni, a famous fishing port in Balochistan. Its beauty is still not tarnished because it is away from populated area — only ruins of Hindu temple, remnants of lighthouse that had been built in 1983 and small Masjid of Pir Khawaja Khizar mainly used in fishing season are located there.

Pakistan has recently declared Astola Island as its first Marine Protected Area under the Convention on Biological Diversity in June 2017. Since this offshore island is free from human influence, this seclusion helps protect several native life forms on Astola

The view of the island from the top and changing of scintillating water-colour pattern leave the viewer spellbound and put in a state of ecstasy that is inexplicable.

The phenomenon seabed is visible at about 20 feet depth in which endangered green and hawksbill turtle can easily be seen. The island is imperative for endemic reptiles, multi-coloured fish, and large number of breeding water birds.

Moreover, it is surrounded by sparse vegetation comprising of shrubs and large bushes which are devoid of fresh water and largely dependent on rainfall for survival. However, keekar is the only tree present there that endures harsh environmental conditions. 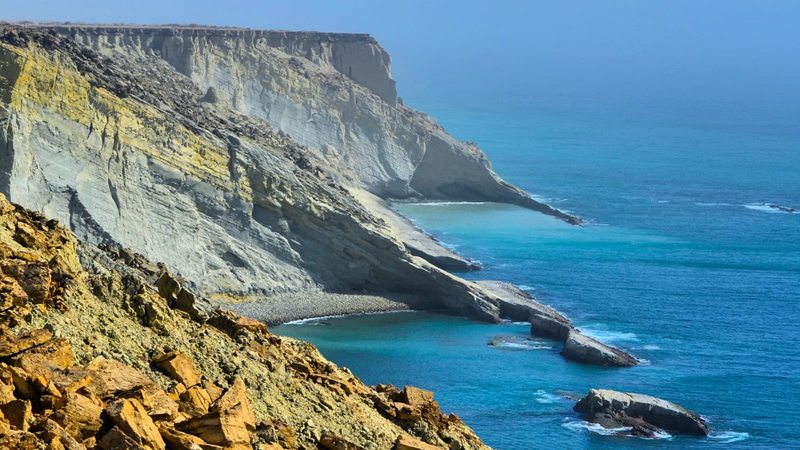 Pakistan has recently declared Astola Island as its first Marine Protected Area under the Convention on Biological Diversity in June 2017. Since this offshore island is free from human influence, this seclusion helps protect several endemic life forms on Astola.

This is somewhat tough but a right destination for those wishing to explore the palliative beauty of nature. However, there are no lodging facility at the site and it can only be accessed through motorised boats from Pasni. It is famous for camping, snorkelling, deep-sea diving and fish hunting, which is regaling. This site is the most excited place for memorable jaunt in order to discover mesmerising charm at the country’s shoreline.