Blood for the nation

Do not stand at my grave and weep

I am not there. I do not sleep.

I am a thousand winds that blow.

I am the diamond glints on snow.

I am the sunlight on ripened grain.

I am the gentle autumn rain.

When you awaken in the morning’s hush

I am the swift uplifting rush

Of quiet birds in circled flight.

I am the soft stars that shine at night.

Do not stand at my grave and cry;

I am not there. I did not die — Mary Elizabeth Frye, Do Not Stand at My Grave and Weep

The rain was pouring down relentlessly. Second Lieutenant Abdul Moeed’s father was walking steadily without an umbrella, along with hundreds of mourners, behind the funeral procession of his martyred son. His cheeks were wet. Nobody could tell whether they were tears or raindrops that soaked them. “I like walking in the rain because nobody can see my tears,” Charlie Chaplin had once said.

The father had been told that a spray of bullets had pierced the body and soul of his son as well as that of the latter’s valiant aide, Sepoy Basharat Hussain, during a bloody encounter with terrorists in North Waziristan. The day the father buried the son, he quivered as the raindrops led him to imagine what it must feel like to have bullets riddle one’s body. Though, in fact, they only prompted him to recall the soft velvety touch of the new born Moeed’s skin; it seemed as if were just yesterday. And then the question came: how can one kill a baby so beautiful and lovely?

For what does a 21-year-old life represent? That cherished period between adolescence and young adulthood; a life on the verge of full bloom where dreams and happiness dance all around. How can anyone kill someone so young and full of life? Thus the tear’s rolling down the father’s cheeks outnumbered those of the raindrops. 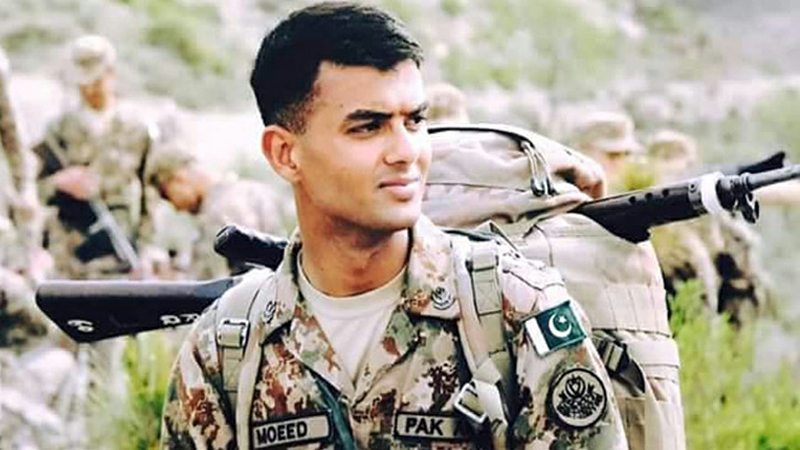 Suddenly a gentle tap on his shoulder, bringing him out of his reverie. Turning his face, he couldn’t believe his eyes. Moeed was walking right there next to him. With a broad smile on his face he said, “Dad, I am not dead. Martyrs do not die. Believe me I am happy. Tell mum.” Of course he would, came the reply. Only that it was not the father but the youngest brother who spoke. There, standing in the rain, the two began smiling. And there as the rest of the mourners began to offer their condolences, the family had found their pain all at once gone.

The day the father buried his son, he quivered as the raindrops led him to imagine what it must feel like to have bullets riddle one’s body. Though, in fact, they only prompted him to recall the soft velvety touch of the newborn Moeed’s skin; it seemed as if was just yesterday

The General, dressed in war attire, walked with a straight gait. As he neared the coffin to have one last glimpse of the fallen young hero, he made sure not to bend lest the unforgiving eyes of the myriad of media lenses misconstrue this sign of affection as a resolved weakened. Thus he only saw the face of the martyr from out of the corner of his eye. Steeling himself, he vowed from the very bottom of his heart that even had there been one thousand coffins that day waiting for the earth’s warm embrace, he mettle would remain strong. “There is nothing more precious than my home land”, he reminded himself.

An old bard who had travelled miles in the merciless weather to attend the funeral was thinking of Faiz and the verses that he had borrowed from the latter to honour Iranian students, and how, today, so tragically befits the death of all sons of the soil, like Moeed:

Who are they, so generous,

the earth holds out, insatiable, ever thirsting?

The Minister cancelled all his urgent meetings and rushed over to the service. There, he embraced the father with such reverence it seemed as if he were touching the Black Stone. He was unable to utter a single word of condolence. For once was he speechless. As he gathered himself, his thoughts became clearer: “This is how the blood of a martyr builds a nation.” Then, whispering in the father’s ear, “This is not a funeral. We are here, standing united, to celebrate the sacrifice of a hero who is alive and watching how his blood is strengthening the nation.” The father gently nodded his head in agreement.

The bard overheard this and offered his own musings, “The flesh and blood of the martyr is but the bricks and mortar needed to build the nation.”

The imam, for his part, was standing in front of the mourners, who were lined up as if warriors; a line of feet and shoulders. Upon noticing the glow of satisfaction on the face of the father, did he then praise the Lord. For he at once understood that Moeed had assured his father of his presence. He recited in his heart the divine words, “And do not think of those killed in Allah’s path as dead: indeed they are alive and receive their sustenance from their Lord. They rejoice in the bounty provided by Allah.” (Surah 3, Aal-e Imran verse 169-170)

The martyr and the masses were pleased; the shaheed was rewarded with eternal life for having spilled gold coins dripped in his blood and the masses, indebted and grateful for this generosity, stood united as a nation. O! The unquenchable, ever-thirsting earth, we have generous galore to spill their blood coins for the gratifying nation.