One can’t help but wonder what makes Nawaz use such negative innuendos?

A new ideology was born on November 19, 2017. The ousted prime minister announced the manifestation of his disqualification in the form of ‘Nawaz Sharif ideology’ while addressing a public gathering in Abbottabad. He was kind enough not to clearly define the newly formed ideology but from his speech it appeared that it has something to do with sanctity of vote.

The voters, living in polluted air and dying in hospitals devoid of medicines, wondered if it included their sanctity as well. Others pondered if this ideology was introduced for those Pakistanis, who live abroad and visit Pakistan to perform certain stints in various cloaks of democracy. Then came another explanation in Quetta, where he revealed that he and Mahmood Khan Achakzai always cherished the same ideology. The latter is known by many an Afghan born in Pakistan. Recently, he vowed to launch a movement for the provision of justice.

Considered as a set of principles, doctrines, myths and ethical ideas, an ideology identifies the way in which a society should work and sets the foundations for a political and social order. The birth of this mysterious ‘Nawaz Sharif ideology’ puzzled many in deciphering its meanings in current political, economic and social perspectives. Nawaz Sharif happened to be Punjab’s chief minister twice and Pakistan’s prime minister thrice, but he never tried to put his ideology at work while in power. Nawaz Sharif presides the PML-N, and his party runs the affairs of Pakistan and Punjab with key positions held by his family members and trusted confidants. Therefore, he can still ensure that the matters of nation are managed in accordance with his ‘ideology’, if it does exist, and help the people understand his philosophy by virtue of example.

Lord Acton said that ‘the power tends to corrupt and absolute power corrupts absolutely’. Unfortunately, Nawaz Sharif has always been for absolute power which could be used and abused by his family members. In his second term as the prime minister, he unsuccessfully tried to introduce the 15th amendment into the constitution to have powers of an emperor. His ascendancy to the upper echelons of power was accompanied by continuous development of his business empire. He never believed in keeping the politics and business apart but assigned them complementary roles. What he is facing today is the dead end of the path he had chosen decades past. Heavens have showered mercy on him again and again. Pakistan has bestowed him everything which a mortal can wish for, and still he never thought of returning the favour. But now it is over.

Thousands of years ago Lao-Tzu, the founder of Taoism, had warned that who amass too much bear heavy losses. In every challenge are hidden new opportunities and the tested strategies of the past are never obliged to bear fruit in the present.

At the eve of the Panama leaks, Nawaz Sharif could take a different course than to employ the tested tactics of the 90s. Before the publication of the leaks, when he was contacted for his response, he announced to bring all his assets abroad back into the country and, leading by example, could launch an official hunt for the stolen fortunes of Pakistan stashed abroad.

He could also lead the initiative to free the nation of corruption and improve the standards of governance. Indeed, it is easier said than done, but extraordinary times are not appeased by ordinary tricks. To save an overloaded ship from sinking in the disturbed waters, offering some of the belongings to the savage waves is both logical and practical.

The current speeches of Nawaz Sharif reminds the final words of the last king of France, Louis XVI, who was executed under the guillotine for high treason and crimes against the State during the French revolution. Moments before his execution he said, ‘I die innocent. 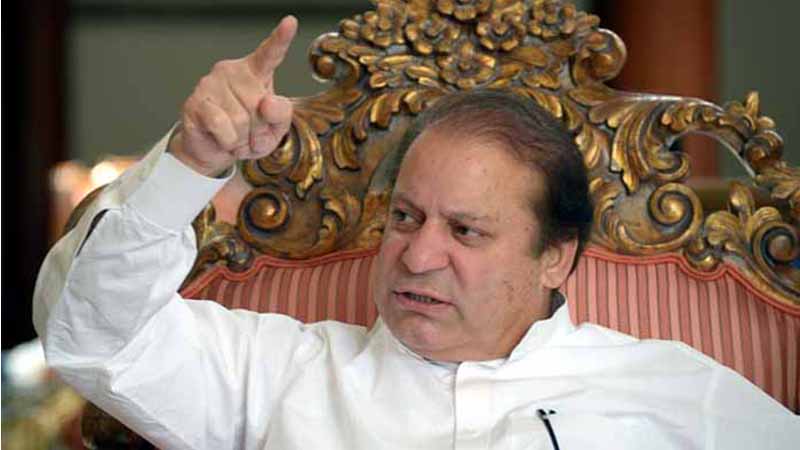 I hope that my blood may cement the good fortunes of the French’. Disregarding if he was a good king for the people or the otherwise, no matter if the trial was biased or fair, in his final words he wished his nation well. However, Nawaz Sharif was given ample opportunity to justify his riches abroad but failed to provide any except for the Qatari letters. Since his disqualification, he never hides his malevolence about the country and its future. Sometimes he warns the nation of another fall of Dhaka and on other occasions threatens that the disqualification decision may result in chaos, unrest and civil war. The most critical question arises about that thinking pattern which makes him use such negative innuendos?

Let the courts take care of legalities regarding Nawaz Sharif’s luxury apartments in London and the other known and unknown properties in different continents. Let us also believe that members of his family are minarets of honesty and every word uttered is nothing but the sacred truth. Such blind faith truthfulness does not help the family emerge as financially clean because every member’s statement contradicts with those of the rest. His absconding sons are not willing to appear in the court of law and explain funding sources for their expensive properties. On the other hand, if we believe such an outstanding growth resulted from the business acumen, the success story of Nawaz Sharif family would have been a part of syllabus in every business school of the world. But never a reputed magazine recognised and applauded the talent of his offspring. The best response he has to account for his great wealth with unknown sources is to question the courts: ‘who you are to ask if my assets and expenses are beyond known sources of income?’

More than the disqualification of one or few politicians, for a majority of Pakistanis, bar a corrupt elite of few thousand, what really matters is the beginning of across the board accountability which culminates in bringing stolen national wealth back in nation’s coffers. In the last ten years of a non-stop democratic stint, our elected representatives have failed to take even a single step in this regard. If Mian Saqib Nisar, Chief Justice of Pakistan, has to intervene to ensure the provision of clean drinking water to the masses and it does not endanger democracy then Nawaz Sharif, and his drum-beaters, may rest assured about the bright future of democratic continuity.