Interaction with Iranian cinema which is not only advanced but relevant to Pakistan will open new possibilities for our film industry, says Director General Pakistan National Council of Arts, Syed Jamal Shah

Islamabad: Iranian cinema is vibrant, creative, innovative and at the same time critical, earning it a niche in the world’s cinema industry.

Its cinematography and unique film directing style that promotes originality so the viewers feel connected with the story as his/her own instead of objectifying and commercializing certain elements of the society.

Pakistan is lucky in a sense that it not only shares borders with Iran but a cultural and religious bond as well, this provides an opportunity to the former to learn from the Iranian film makers for reviving its own struggling film industry.

Director General Pakistan National Council of Arts, Jamal Shah, a film maker himself believes that Iranian cinema is very significant and relevant to Pakistan. Since Iranian cinema is very advanced and both countries share the same cultural values and norms, it calls for so much more interaction to find avenues of cooperation between the two cinemas. Pakistan, in fact, would benefit a lot.

Renowned film critic Aaijaz Gul echoed Jamal Shah’s feelings saying that Pakistan should follow Iranian cinema as the country is quite precious for it. Iran has achieved what very few countries have accomplished. It has technical expertise, real themes, real plots, and these are the things Pakistani cinema lacks in. In the 80s and 90s, an effort was made by the private sector into this direction but all failed to work out.

Speaking at the week-long Iranian Film festival launched at PNCA on December 11, 2017, State Minister for Information and Broadcasting, Marriyum Aurangzeb said, “The government was trying to support the Pakistani film industry and has announced various packages in this regard. Pakistan is planning on inviting Iranian film makers and experts in the field to collaborate with the Pakistani film industry and help revive it.”

‘Pakistan can learn from Iranian cinema by becoming critical and creative but at the same time presenting a true picture of the indigenous culture and value system. Cinema is also a strong medium that serves to educate people about democratic principles and no democracy can survive without having good cinemas and other genres of art’

The minister further suggested that PNCA should initiate a program for screening Iranian films in Pakistani cinemas and Pakistani films in Iran. She also talked about the war on terrorism and how it damaged our cultural heritage, music and film industry. She said it’s high time we focus on the revival of our cultural heritage and such festivals will be beneficial in this respect.

Iranian Ambassador, Mehdi Honardoost supported the minister and expressed his desire for cooperation between the two countries in the field of fine arts. He said, “Pakistan and Iran share the same moral values in addition to several other commonalities and a geographical connection. We should, therefore, screen each other’s films and dramas in our countries.”

But Aijaz Gul believes that Pakistani films without exception are commercial films whether produced currently or 20 years ago. A Pakistani film is a cocktail of some music, dance sequences, comedy, drama, action, violence and sentiments. I can think of very few films which can be appreciated by the international audience including Iranians, as they have become very mature and sophisticated and it is hard to believe that they will watch and appreciate our films.

Minister of State for Information, Marriyum Aurangzeb said, “Iranian films are vibrant and show the societal and Islamic values of Iran, she also appreciated Iranian film makers for their creativity and authenticity instead of following international trends. She said that’s the reason Iranian cinema has gained international recognition and produced Oscar winning films. Their films are a true reflection of their religion and society.”

Honardoost said that Iran is producing films according to Islamic values and has proved those wrong who say Islam and films cannot go hand in hand. He said all the films which were to be screened during the event have strong subjects to deliver to the international audience. 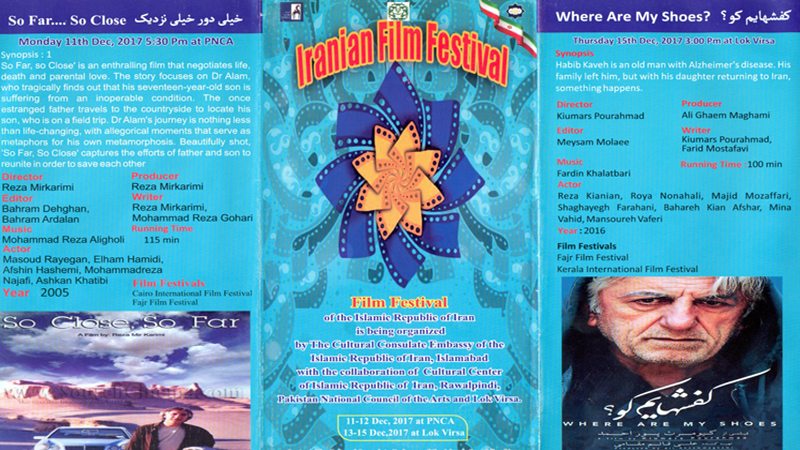 This is exactly in line with what Aijaz Gul said, “Every film critic and follower of Iranian cinema thought that the revolution would bring the end of Iranian cinema but were proved wrong. The government led by Imam Khomeini selected some very talented film makers from the 70s and sent them to French Film Institutes for refreshing courses. It merits mentioning that Khomeini spent his exile years in France and there he learned how important films are for societal growth and people’s education.”

“This gave birth to a new cinema in Iran. It was real cinema based on true stories which viewers could relate to. Personally, before watching films of that era, I thought the focus would be on the Iraq war and Islamic propaganda, but it was proven wrong once again. The stories were about a teacher, a student, special people, corruption etc. I watched a movie ‘The Senator,’ which showed how a senator could become cruel to achieve his political goals. This was what I called earlier, Realism.”

Jamal Shah believes the major challenge for Pakistani cinema is to neutralise its commercialism and go to its roots in a similar way that Iranian cinema did. “I believe this is the area where Pakistani cinema can learn a lot from the Iranians, for which more interaction and cooperation is needed. Another aspect in which Pakistan can learn from Iranian cinema is by becoming critical and creative but at the same time presenting a true picture of the indigenous culture and value system. Cinema is also a strong medium that serves to educate people about democratic principles and I believe no democracy can survive without having good cinemas and other genres of art.”

According to Aijaz Gul, this is what Iran did when the education ministry jumped into sponsoring films. A film called ‘The Key’ was produced. “It is human nature that they would like stories, so instructional films for children were made. I remember one film, the theme of which was educating mothers not to leave their little ones unattended at home. It showed a six-year-old and two-year-old unattended as their mother left the house for some work. This was a film with a strong message that said never leave your kids alone.”

Aijaz Gul suggests that officials from both sides should sit together and find ways on how to build cinematic relations seeking common factors. Such films can be searched on Pakistan’s side, worthy to be shown in Iran. If certain elements are not acceptable, the censor board is always there to make it watchable for Iranian cinema.

“I worked at the National Film Development Corporation (NAFDEC) for many years and it was part of its charter to bring movies from abroad, and there was a time every month two Iranian films used to be shown. With the closure of NAFDEC, the process discontinued. Dozens of films were shown for a few years between the 80s and 90s, and the Iranian government regularly conducted film festivals in the premises.”

“The strength of Iranian cinema is that it is not dependent on stardom. It is at par with the West in terms of editing, digital sound, photography, production values and good use of music; therefore, obviously Pakistan will learn a lot from it. The key to bringing Iran and Pakistan together is co-production.”

Mr. Gul believes that Iranian Cinema operates with responsibility. Though some subjects are still off limits, he believes with the passage of time those subjects will be covered as well.

He said that Iranian cinema can be divided into two parts – before 1979 and post 1979. “The pre-1979 period was mostly Reza Shah’s period. It should be noted that film came to Iran in the early 20th century within ten years after the birth of cinema in the United States of America in 1895. In its nascent years, it produced movies like Omar Khayyam, Shirin Farhad, and Layla and Majnun. From that early period, we jump into the late 60s and early 70s when stories of film became very liberal and open. Clubs and pubs became part of life and obviously that life style was shown in movies as well. In this era, an important film titled ‘The Cow’ was made to announce the arrival of New Realism. In that era, realistic films were made with low budget, ordinary faces and social subjects, the reason being that the film industry was collaborating with European and American cinemas in that time.”

Aijaz Gul’s observation is that so far women have not been given their due share and have been kept mostly in the background. “A conservative image or a rather tribal image of the society has been portrayed, giving the lead role to men while keeping women in the background. Women have always been shown in the supporting role. Lately, I have seen a big change in the sense that women directors are propping up in the scene, this would hopefully transform Iranian cinema as well.

Cultural Counselor at the Iranian Embassy, Shahaboddin Daraei disagreed with Aijaz Gul and said that in Iran cinema started to operate with proper standards after the Islamic revolution, he added that Iranian films have been able to portray the presence of women in various aspects without objectifying them.

The strength of Iranian cinema is that it is not dependent on stardom. It is at par with the West in terms of editing, digital sound, photography, production values and good use of music. The key to bringing Iran and Pakistan together is co-production

Film Director Majid Majeedi changed the colour of Iranian cinema forever, said Mr. Gul. He has a background in stage and theater and his movies are mostly focused on children and their issues like in the Color of Paradise (1999), Children of Heaven (1997), Baraan (2001). Last year, he made a movie on Muhammed PBUH, which as expected earned him the scrutiny of religious circles. Aijaz Gul added that not just Pakistan, but even Saudi Arabia and other countries who want to revive their film industries can benefit from the Iranian expertise in the field.

Wajeeha Fatima, a film critic is also in sync with Mr. Shah and Aijaz Gul and says that Pakistani film makers will benefit a lot from interaction with Iranian cinema. With film schools and a history of film making, Iranians know how to make films and structure them, and Pakistani film makers will learn a lot on how to make art movies if they get into joint film making. It merits mentioning here that the PNCA Cultural Pact Implementation receives most invitations from Iran to participate in their festivals.