‘Rebirth’ has been produced by EMI Pakistan and has been directed by Amaan Ahmed. The track takes a listener on a journey through the undiscovered areas of Pakistan

The title song from his album ‘Rebirth’ along with its video was be released on Monday on YouTube, Vevo and Vimeo.

‘Rebirth’ has been produced by record label company EMI Pakistan and has been directed by Amaan Ahmed. The track takes a listener on a journey through some of the undiscovered areas of northern Pakistan.

The music video was shot in a number of locations including Hunza Valley, Attabad Lake, Khunjerab Pass, Passu Glacier, Naran, Babusar Top, Pasu Cones and Harnai Bridge. The video comprises of some breathtaking and daring shots of these areas including showing Asad Ahmed strumming his guitar in the middle of a suspended bridge.

“’Rebirth’ is a video about a wanderer on a path of self discovery. We wanted to film the video in remote scenic locations where we don’t see anyone else other than Asad Ahmed walking/performing. We trekked miles and miles away from civilisation to achieve that. The video was shot on longer lens and drones were used to get the extreme wide-angle shots. The trick was to use natural light in the best possible way, so shooting time for every location was very important. As far as the whole experience is concerned, we were just awe-struck with the beauty of the Northern areas and the hospitality of its people. We hope that this video shows the softer image of the Northern areas of Pakistan and changes the perception of it being a dangerous place,” Amaan Ahmed said. 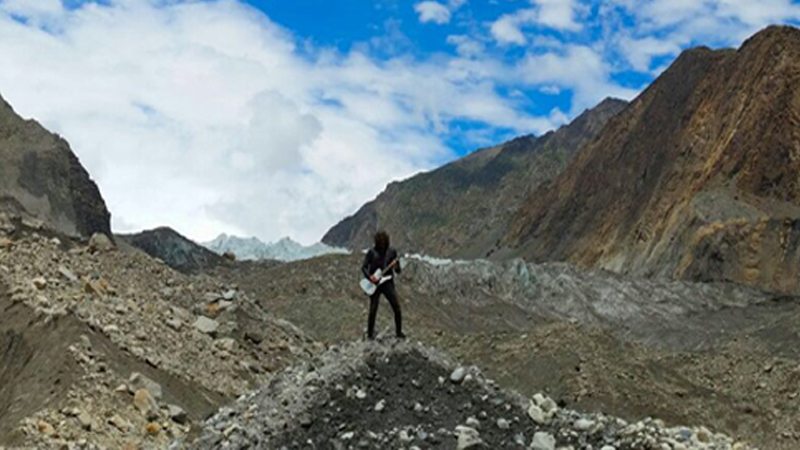 “The idea of Asad Ahmed performing in the northern side of Pakistan amongst beautiful landscapes is very appealing. This was a perfect opportunity for us to showcase the beauty of our country and take the audience on a visual expedition. The title ‘Rebirth’ is a breakthrough in the instrumental music scene of Pakistan and also part of our constant commitment towards the betterment of the Pakistani music industry,” the video’s executive producer Zeeshan Chaudhry added.

Asad, while giving an insight about his music video to the media, said, “The name ‘Rebirth’ comes from re-discovering myself after a series of events that led me to explore and re-invent myself over a period of four years. What we see in the video is a depiction of those feelings presented through the camera eye, showing me travelling to the furthest regions of the country alone with just a guitar in hand. Finding the light was an important part of my healing process, which is why we have shown such landscapes and my presence at all these places, yet in solitude. I wanted to explore the northern areas of Pakistan for the video to show the vast landscape that a lot of people have not yet seen or discovered.”

The writer can be reached at daniaijaz@gmail.com