From this deep sorrow - from the painful grief?

Will I ever enjoy life’s sweet song

As 16th December approaches, agonizing memories flood through. Though separated by forty-three years and more than one thousand miles- two harrowing occurrences left indelible scars on our souls that changed the fate and outlook of the nation. First, I think of the debacle that took place in December 1971- East Pakistan now Bangladesh. Pakistan, a brand new country, painstakingly created through the sacrifices of millions, succumbed to the machinations  of heartless politics led by its mischievously misled local agents; the  Mukti Bahni.

The valiant defenders who rode in the valley of death were betrayed and besieged by the estranged brethren. Still, they fought like warriors till the feckless command passed orders to surrender.

It was a characteristic example of a family feud that turned into a bloody saga. Brothers savagely cut each other’s throats without reluctance at the behest of the cunning enemy.

A 70 year old Bangali woman, Rakhshanda, reflected on her memories of  16th December 1971, “Dhaka was engulfed in palpable gloom. From the balcony of my home I saw hordes of frenzied Mukti Bahni miscreants chanting slogans in the streets. I couldn’t believe what was happening. Indian army trucks were all over the place. My God, within 24 years of hard earned independence we were back to square one. These were the ugliest and most unwanted scenes my eyes had ever seen”. ”

My father was a civil servant posted in Lyallpur. On the fateful day he was visibly grim and silent. As a kid, I could feel something terrible had happened. His eyes were moist, and his gaze was lowered. He mumbled a few words about the fall of Dhaka which I couldn’t really comprehend. But the next day he was ready to go to office on time, his chin was up and there was a visible streak of determination in his eyes. He was ready to overcome the colossal tragedy, like millions of other Pakistanis, armed with a resolve to be stronger and better.

Though December 16 twice inflicted immense pain and grief on us, it also cracked as a whip to reignite zeal and vigour in us and to help us emerge as a nation that has the resolve to recover, rise and shine

Forty-three years later, an equally glum 16th December brought a tragedy of unfathomable pain. A group of home-grown terrorists mercilessly butchered the school children in the city of Peshawar. One hundred and forty-eight innocent kids perished in the hail of bullets and blasts of suicide attacks by casehardened compassionless monsters. The scared children screamed and ran helter-skelter for shelter. Many would have craved for the safety of the laps of their mothers and the protective arms of their fathers. But there was none. Never before in modern history had the world had witnessed such a gory massacre of so many innocent children at the hands of barbaric terrorists. While the poltroon was spilling the blood of innocent kids, many valiant teachers did actions of  bravery and selflessness. 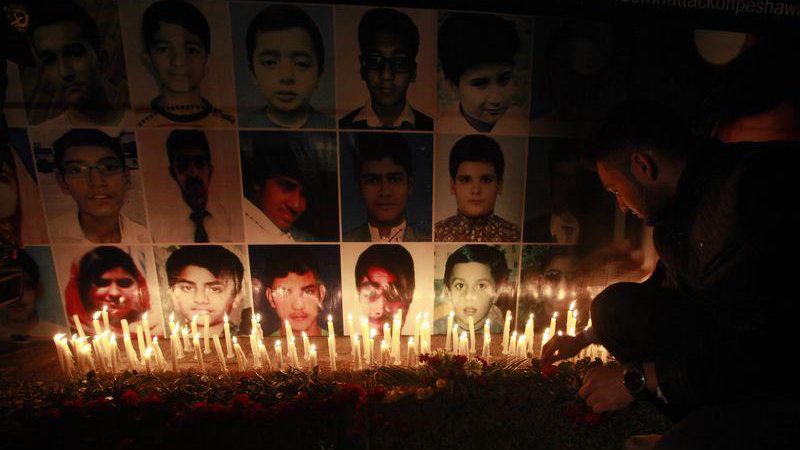 Ms. Tahira Qazi, the Principal of APS School, made valiant efforts to protect the children from the claws of death. The enraged terrorists killed her by throwing a grenade at her. The Telegraph published the narrative of a student, Irfan Ullah, who told he would have probably been killed if his teacher, Afsha Ahmed, hadn’t stood in front of the attackers as they entered their room and told them she would not allow them in. “She was so brave,” Irfanullah said. “Her last words to the terrorists were: ‘You must kill me first because I will not see my students’ bodies lying in front of me.’ “The next thing we knew, she was on fire. Even while burning, she shouted at us to run away and find refuge.” Another teacher, Hifsa, was also burned alive in front of her pupils.

The hearts of shocked and saddened people of Pakistan bled with grief but they raised a battle cry in unison to annihilate the terrorists. The Prime Minister shelved the ongoing negotiations with the terrorists, ordered an end to the distinction between the good and bad Taliban and lifted a moratorium on the death penalty for the terrorists. He led the attack on the terrorists from the front and the security forces delivered.

Although 16th December twice inflicted immense pain and grief, it cracked as a whip to reignite zeal and vigour in us to help us  emerge as a nation that has the resolve to recover, rise and shine. History is evident that the nations that suffered greatly grew stronger by sheer determination. The concepts of endurance and resilience must be the essence of our cultural identity. It will enable us to face  daunting challenges ahead. We will neither wither nor fall like autumn leaves. We will surely become strong and enjoy life’s sweet song.