The politics of religion

When I was growing up in Pakistan, I was constantly told that this country is controlled by two entities: Mullahs and the establishment. It seems that this indeed, is the case. The incidents surrounding the dharna by Tehreek-e-Labaik Ya Rasool Allah (TLYR) at Faizabad have proven that an incredible amount of political capital lies with the likes of Khadim Hussain Rizvi.

Rizvi has garnered massive concessions from the government of Pakistan by holding Islamabad hostage for twenty days and defying the judgements of Islamabad High Court and Supreme Court. Even after the restoration of the all-important articles 7B and 7C on the finality of Prophet-hood in the election act and multiple apologies from the Law Minister, the state had to kneel to pressure exerted by a couple of thousand. What went down in Faizabad?

It is crystal clear that the so called incompetence of the Punjab government in failing to stop the TLYR cohorts on their way to Islamabad isn’t actually incompetence. But to further understand the government’s inability to crackdown on TLYR protestors during the earlier phase and taking action to move them away from Faizabad when it was almost too late, it is important to analyse the PML-N’s voter demographic. The PML-N has historically enjoyed votes of religious groups belonging to dominant Sunni sects that exist in big numbers on the GT road belt, rural areas in South Punjab as well asurban areas. Some of these groups belong to the Barelvi movement such as Sunni Tehreek, Sunni Ittehad Council and Dawat-e-Islami.

As an offshoot of Islami Jamhoor Ittehad which was primarily an alliance of conservative right wing parties, the PML-N’s voter base is dominated by these groups. It is precisely for this reason that the ruling party and particularly Shahbaz Sharif were incredibly wary of taking aggressive action against TLYR, which happens to conform to the Barelvi movement. 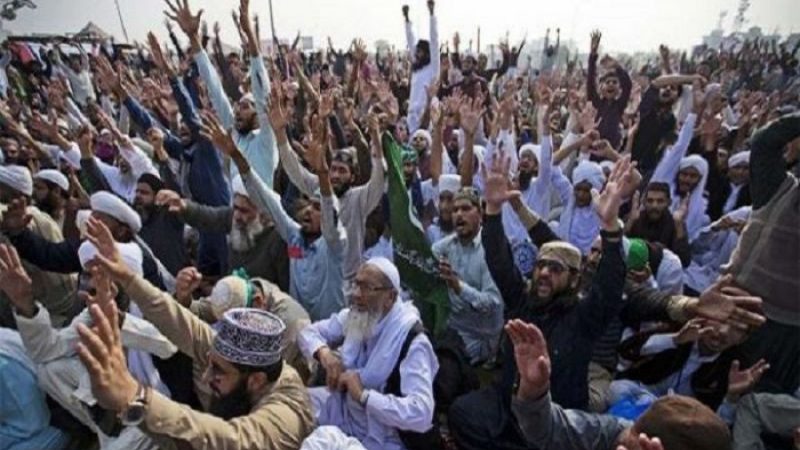 This, in my opinion, forms the logic to PML-N making vague attempts at negotiation rather than following IHC and Supreme Court orders in a bid to prevent alienating their religious voter base in Punjab. TLYR fits into the equation because they too are Barelvis and adhere to a rather ferocious brand of Barelvism which is distinct from other Sunni groups. This is visible by their tactics.

Any action against them would have provided a narrative against PML-N which would risk their voter base in the upcoming election. The politics of this has however quite blatantly damaged the writ of the State. The politics surrounding the whole scenario were extremely volatile to begin with. Giving in to TLY’s demands for Zahid Hamid’s resignation is debatable but the unquestionable consequence has been that it only led to further acceptance of demands such as inclusion of TLYR members on the Punjab Textbook board curriculum revision committee, which is problematic on multiple levels.

Not only has it meant that the government now appears powerless before religious groups intent on protesting in the future, it has also demonstrated zero negotiating power. A group of people that contravened court orders and used uncouth language in the capital have gotten away looming as the powerful party in this intense exchange.

Maintaining political ground has meant that the ruling party has come across as weak and feeble across the country and internationally. The role played by interior minister Ahsan Iqbal is a different matter altogether. His claims that he didn’t know about the operation that was carried out to remove the protestors is either a lie to prevent backlash from TLYR and other groups or it is sheer incompetence. Either way, a reasonable figure like him should step aside from the interior ministry.

Then comes the PTI, which exploited the Faizabad debacle in every way possible to downgrade and destabilise the government. No surprises there though. On the matter of state writ, it is expected that opposition parties will prioritise minimal but necessary cooperation with the government, not least by supporting the government’s stance which in this case was legitimate: to move the protest to a secure parade ground and prevent a minister’s sacrifice at the behest of a fairly small but powerful group of protestors.

Instead of negotiating with TLYR from a position of strength, Major General Faiz Hamid, the key negotiator who brought the matter to a rest, gave in completely. Not only did the Law minister resign but the Chief was thanked for his cooperation in this agreement. The government was removed from the equation completely and cheques of Rs 1,000 were disbursed to those protestors accused of violence, with FIR’s registered against them. Such a mockery of law and state writ is unprecedented

Throughout the 20 days, the PTI used the Faizabad Dharna to call for fresh elections in light of government’s incompetency. The charismatic Imran Khan even called for resignations from the Prime Minister and Interior Minister at a time when the capital was literally besieged. Business as usual for Imran Khan. Whilst the PML-N was battling to prevent its Law minister from bowing down to mob pressure and secure its political front in Punjab, PTI played its own politics by fully siding with Khadim Rizvi’s closure of an extremely critical juncture in twin cities. Hailing from a middle class family from an urban city, I expected the PTI, renowned for their distinct brand of ‘decent’ Naya Pakistan politics, to call out TLYR’s leader for abusive language and aggressive tactics.

The maturity conjectured from them was to support the government’s call for fair investigations to determine the person’s responsible for the removal of article 7B and 7C. Instead, they asked for all out resignations, dismissal of the federal cabinet and fresh elections, which made things even more chaotic.

The optics of this incident as well as the ground reality of it is relentlessly disturbing but clear: the PTI was trying to make political gains by aligning their slogans, claims and policy with the protestors. Their opportunism was triumphant over the duty to prioritise state writ by playing the role of a responsible opposition.

How so? Because the PTI saw this as the opening into Punjab’s base of voters aligned with the large Barelvi movement. They now plan to pit the PML-N against an already angry religious voter base. Imran Khan has already labelled this as an international conspiracy launched via PML-N, but that too like most of PTI’s outlandish claims makes no sense.

The issue was brought up in a senate hearing about two and a half years ago when a JUI-F senator proposed an amendment to reinstate the articles for oath taking but it was surprisingly struck down by most opposition members on the ground that non-Muslims can’t take this oath which can be verified by senate hearing notes and Aitzaz Ahsan’s interview.

This issue was very much brought into PTI and other opposition parties notice hence no room for conspiracy theories is left.Using religion for politics to advance political gains can have ramifications.

Then came our overlord, the Chief of Army Staff. Despite an outcry against the army for advising against an operation on its ‘own’ people, I defend them here. This situation had the potential to explode into a civil war which played the biggest part in the Army’s decision.

The last thing the country wanted was countrywide unrest resulting from an issue linked with blasphemy. What was unfortunate here is that instead of negotiating with TLYR from a position of strength, Major General Faiz Hamid, the key negotiator who brought the matter to a rest, gave in completely.

Not only did the Law minister resign but the Chief was thanked for his cooperation in this agreement. The government was removed from the equation completely and cheques of Rs 1,000 were disbursed to those protestors accused of violence with FIR’s registered against them. Such a mockery of law and state writ is unprecedented. Barring the debate about the establishment’s history and willingness to bring hardliner extremists into mainstream politics, this agreement is a new low.

In 1977, a similar religious movement spearheaded by the Pakistan National Alliance (right wing, conservative parties) destabilised Bhutto’s government by playing the religion card and accusing him of failing to uphold the cause of Islam in Pakistan.  In 1953, the Lahore riots against Ahmadi Muslims laid the ground for weakening of Khawaja Nazimuddin’s government as martial law was imposed in Lahore to curb violence.

Here we are in 2017, and the entire capital was held hostage in the pretext of religion and it has certainly weakened another government. While it has taken years to calm down and curb violent Deobandi organisations like Sipah-e-Sahaba and Lashkar-e-Jhangiv, the Barelvi movements have predominantly remained peaceful.